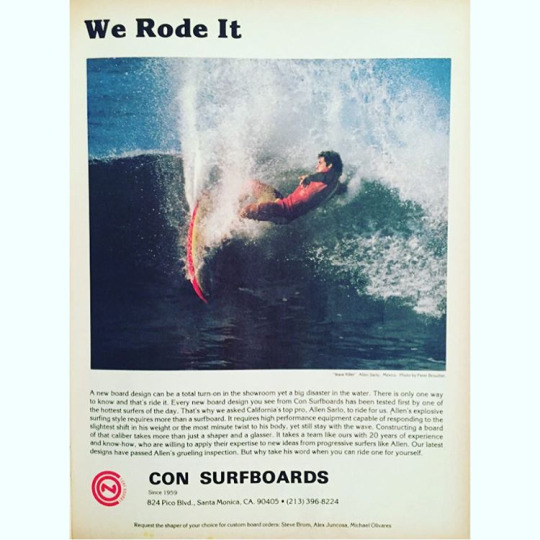 Located in Galveston, Texas, of all places, and posted on Craigslist is a beautiful Con surfboard that looks to be an Allen Sarlo “Wave Killer” model.

For some background, Allen Sarlo was one of the original Z-Boys of Venice Beach. Sarlo and the rest of the Z-Boys were the basis for the “Dogtown and Z-Boys” film that was released a little while back. Sarlo can still be found ripping Malibu today.

Sarlo’s nickname was “Wave Killer”, and he was sponsored by Con Surfboards, which is a Shred Sledz favorite. On this board you can see the distinctive red circular Con logo on the deck, and then a clear “Wave Killer” spray on the bottom. Here’s a picture of Sarlo surfing what looks to be a Con single fin. I would guess this picture is from sometime in the 80s:

More to the point, however, one of Sarlo’s most famous boards was a Con shape with a different “Wave Killer” spray. This board was recently featured in the book “365 Surfboards”, along with a picture of Sarlo reunited with it. Here’s the picture below:

Around five years ago, Hurley had a surfboard exhibit in Santa Monica where they showed off the very same model of Sarlo’s infamous Wave Killer board. I’ve included a picture from the exhibit below:

Now, the interesting thing is I can’t really find any information about the Wave Killer model itself. I can’t tell if Sarlo actually had a signature model that was made for a few years, or if this was a one-off spray job (or perhaps even a custom board made for Sarlo that somehow found its way to Galveston, Texas). Stoked-n-Board doesn’t list anything about a Sarlo model on its entry for Con Surfboards. If anyone has more info, please let me know!

If you want to check out the board on Craigslist, you can find the ad here. No price has been listed to date.