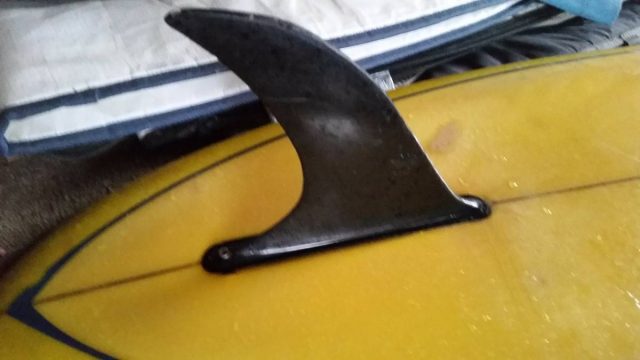 First and foremost, I would like to thank all three of my loyal readers, or even anyone who has stumbled across the site and waited for at least three seconds before closing the tab. If you have read any one of these posts and enjoyed them, then I can’t thank you enough. It is my pleasure to find cool and interesting surfboards and share them with people, no matter how minuscule (some would even say non-existent) my audience might be.

The last board of the year is a doozy! It’s a Challenger Surfboards Micro model, currently for sale on Craigslist in San Diego for a not at all outrageous $350.

Challenger surfboards was the brainchild of Bobby “Challenger” Thomas, a San Diego-based shaper who sadly passed away in 2012. At its height, Challenger Surfboards was one of the better-known San Diego surfboard labels, and it had some other talented shapers in its table, including Bill Bahne.

This is a classic transitional board from the late 1960s. You can just barely see in the logo that this is a specific Micro Formula Vee model (look for the small “Formula Vee” directly above the “Micro” logo, and hidden by the wax). The Surfboard Project has a great example of another Micro Formula Vee, and I’ve included their picture here:

Picture courtesy of The Surfboard Project

According to Stoked-n-Board, the Micro Formula Vee was a specific variant with down rails and a pintail that was shaped between 1968 and 1969. You can clearly see the pintail in the second picture, along with what looks to be an original fin in place, too. The Micro Formula Vee, as the name indicates, is also a vee bottom board. It’s hard to see in the original pictures, but I’ve included a few shots of another Micro Formula Vee that give a better look at the shape of the vee bottom:

The original board looks like it’s in decent shape, especially considering it’s closing in on 50 years old! Looks like there are some dings in the tail that were repaired, and there’s another suspicious looking spot near the fin. In any case, feel free to check out the board here.

Finally, I wish you all a Happy New Year. May 2017 bring you more stoke than you could possibly imagine!