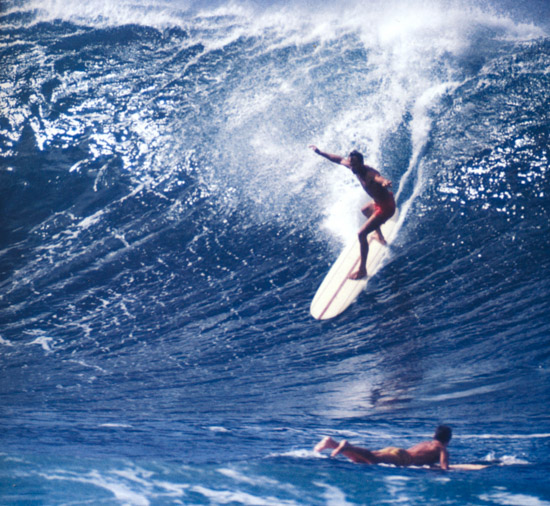 Today, little children, we are going to do a quick little lesson on one of the most famous boards of all time. This is the first post in a new Shred Sledz series that hopes to shed light on the creations of the one and only Phil Edwards. Today we will be starting with the famous Hobie Phil Edwards model, one of the most collectible boards ever made.

For a certain generation of surfers, Phil Edwards is and will always be a legend. For starters, he was one of the first people to ever ride Pipeline, which is about as awesome as it gets. The picture at the top of this post – taken by the legendary Leroy Grannis, and courtesy of the Encyclopedia of Surfing – depicts Edwards surfing the fearsome Banzai Pipeline. Edwards is one of the rare humans who shaped as well as he surfed, and his name remains associated with some of the most sought-after boards in the world today.

Given Edwards’ resume, you would think there would be tons of information floating around online. Sadly, this isn’t the case. I had always assumed Edwards had passed away, given how little is said of his current whereabouts. But apparently he is alive and well, and he visited the Hobie factory about four years ago for an event. You can find a recent photo on Hobie’s website, which I’ve included below.

According to the Encyclopedia of Surfing, Hobie’s Phil Edwards model was produced first in 1963. Today these boards are incredible collectors’ items. This post will examine three different Hobie Phil Edwards boards that were recently up for sale. The hope is to give some kind of context on this wonderful board, as well as what kind of prices it commands on the open market.

The first board featured here was sold at the recent Surfing Heritage Vintage Surf Auction. The picture below depicts a Hobie Phil Edwards model with serial number #999. The estimated closing price was between $2,000 and $5,000; I was unable to find info on the final price for the board, however. You can see the beautiful glassed-on D Fin in the pictures, the triple stringer design (with a wider center stringer), and then the silver foil label.

The second board is a Hobie Phil Edwards from the 1960s, also in excellent condition. It is a 10′ board that is currently for sale on Surf Garage, and the listing claims it’s all original and dates to 1968. Here you can clearly see an example of the “foil” label that can be found on the earlier runs of the Phil Edwards models. Later on, especially with reproductions, these labels were replaced by silver, non-foil laminates beneath the glassing. This board is being listed for sale at $4,000, which is steep, but if this indeed all-original, that is in the ballpark of similar boards. You’ll also notice this board has the same features as the one sold at the California Gold auction: same triple stringer setup, same D fin, and then the foil label. It is serial number #865, as clearly shown in the picture. My last note is that this board seems to be in suspiciously impeccable condition. I am wondering if it was restored, but I have no further info.

The third Hobie Phil Edwards model was also sold at an auction, but this time it was at the US Vintage Surf Auction. This board has the same hallmarks of a Hobie Phil Edwards model, as explained above: you can see the triple stringer design, a glassed-on D fin, and, of course, the distinctive silver label with a clear serial number (#103). The auction claims that this is the lowest numbered Hobie Phil Edwards they have found in existence; I have no way to verify if this is indeed the case. It’s also curious to contrast this silver label with the one on Serial Number #865. #103 is way more faded, and the deep blue of #865 looks more like a green. There are likely differences in photo editing, etc., that explain the discrepancy, but I found it interesting nonetheless. This board was estimated by the USVSA to go for somewhere between $5,000 and $6,000, but again, there’s no info on what the final price ended up being.

What’s interesting about these original boards is I can’t find an example of a Phil Edwards signature on any of them. I tend to believe that none of the original run of Hobie Phil Edwards boards bore his signature, but I would love to know if there are any examples I might be missing. Edwards signed the re-issued version of the Hobie boards, which will be the subject for a future post.

Finally, I’d like to include a shot from a board that Pepperdine University has as a part of their John Mazza Surfboard collection. It’s a 10′ Hobie Phil Edwards model from 1963, and they’ve got some great pictures up on the site. In this shot you can see the fin. I’ve heard conflicting reports, as some sources indicate the fins are made of ash wood, and I’ve also heard they are made from balsa. I can’t say for sure. But I do know they’re pretty awesome to look at.

And as a bonus, I came across this old Hobie ad on Swaylocks. From left to right are the following surfers: Joey Hamasaki, Joyce Hoffman, Mickey Munoz, Phil Edwards, and Bill Hamilton! Note how each name has an Encyclopedia of Surfing account linked to it. That’s a murderer’s row of surf legends right there. In the middle of an ad is an example of a classic Phil Edwards model. You can see the triple stringer and the silver foil logo.

I hope you found this post useful, and stay tuned for parts two, three, and four on Phil Edwards and his boards!