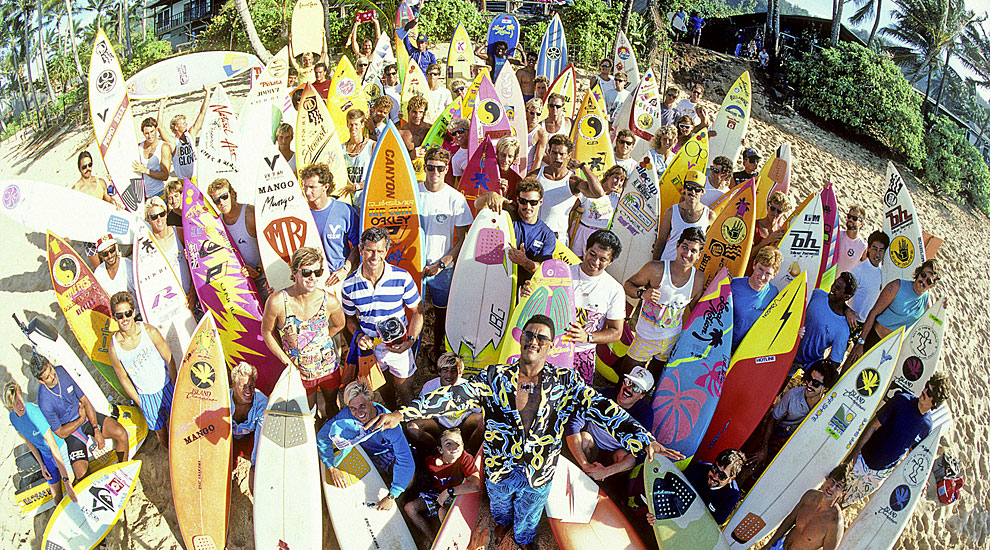 For most of us mortals, December signifies the arrival of the holidays. It’s time to spend time with family, watch “Home Alone” again, drink egg nog, or maybe just use the time as an excuse to do some otherwise unjustifiable amounts of online shopping.

For the surf industry, though, December is a month of pilgrimage. Surfers from around the world descend upon the North Shore of Oahu, turning the sleepy island town of Haleiwa into the pulsing center of the surf world for a few intense weeks.

The Wave Warriors maestro is none other than surfing legend Herbie Fletcher. Legend can be an overused term, and I have to admit, as I write this I am getting flashes of panic thinking about times I have used this word to describe others whose impact on surfing has been a fraction of Herbie’s. Among other things, Fletcher is an artist, the creator of surf traction original Astrodeck, and father to sons Christian and Nathan, both of whom are long-time pros. (Christian’s signature boards are particularly prized at Shred Sledz HQ).

Herbie Fletcher enjoying a coconut on the North Shore of Oahu in 1969. Photo by Art Brewer; Courtesy of Encyclopedia of Surfing

Herbie is also a surfboard shaper. As the 2016 edition of the Wave Warriors shoot is wrapping up – stay tuned for pics – I figured it would be as good a time as any to explore some of the boards that Herbie has made.

First, there is a Herbie Fletcher gun currently for sale on eBay. The board is being sold out of Japan, which explains the insane price (upwards of $3,000). Nonetheless, it’s an excellent example of a real deal Herbie Fletcher shaped board.

You can see the distinctive arrow logo, as well as the clear “Herbie Fletcher” logo in the center. I’m guessing the narrow swallowtail is likely from sometime in the 70s. You can see the original listing here as well. The listing advertises this as a “Sunset Gun”, meaning the board was designed for the big open ocean peaks of Sunset Beach, one of the North Shore’s most demanding waves. I can’t find anything that supports this, but given Fletcher’s history and the board’s design, including the unusually thick stringer, this all sounds very plausible.

I’ve seen examples of Herbie’s boards that have his name inscribed in the arrow logo, and those that are blank. First, here’s a clearer example of another Herbie Board with his name on the logo:

Apparently the board is for sale for $350 (!) and it is from 1974. The website looks like it might not have been updated in some time, but if that’s a real price then that board might be my very thoughtful gift to Mrs Shred Sledz (a la the time Homer Simpson bought Marge a bowling ball for her birthday).

Island Trader Surf posted a primo example on their blog a little while back. I’ve reproduced the picture below, and you can see there’s even a “Dana Point” visible as part of the logo, signifying the board’s place of origin:

Here’s a shot of Herbie surfing one of his own creations, and you can see his name is noticeably missing form the arrow logo:

Photo by A-Frame; courtesy of Surfline.com

I hope this was a helpful rundown of Herbie Fletcher’s various board designs. As always, feel free to leave me any feedback, and happy shredding!