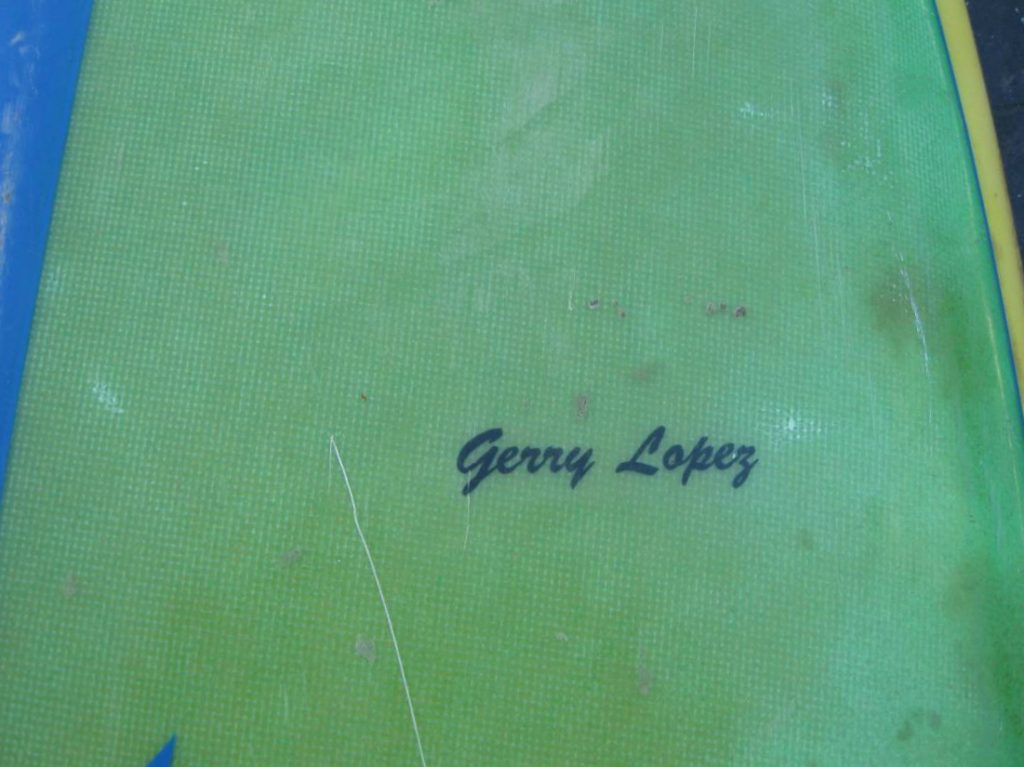 Happy Monday to all you faithful Shredderz out there! I hope this week brings you a non-stop procession of tasty waves and interesting surf craft. I figure there is no better way to start the week than with the holy matrimony of Lightning Bolt Surfboards and Hawaiian legend Gerry Lopez. The Gerry Lopez Lightning Bolt is perhaps the most famous vintage surfboard of all time, and for good reason. If the name Gerry Lopez rings a bell, it’s because you may recognize him from his role as Schwarzenegger’s sidekick Subotai in “Conan the Barbarian.”

Gerry Lopez has one of the all-time greatest appearances by a pro surfer on film, guest starring as Subotai in “Conan the Barbarian.” Lopez is the mayor emeritus of Pipeline; his co-star in the film would go on to a decent political career himself.

Actually, that’s nobody’s first impression of Mr. Lopez, but it is an irresistible piece of surfing trivia. All jokes aside, surfing legends don’t get any larger than Gerry. For goodness sake, the dude’s nickname is Gerry “Mr. Pipeline” Lopez! Given his impeccable style, it’s a miracle they haven’t re-named the spot after Gerry himself:

First, some background on the man and the marque. Lopez, along with business partner Jack Shipley, founded Lightning Bolt in 1970. (For more extensive background, see the Encyclopedia of Surfing’s entry on Lightning Bolt.) Lighting Bolt started with an unorthodox business model that was more akin to a collective than a real brand. According to the EoS, Bolt initially did not have a centralized factory where all of the production took place, and instead a variety of shapers – including Lopez and other notables like Reno Abellira, Tom Parrish, Tom Eberly, and Barry Kanaiaupuni – shaped at home and then brought their wares into the Lightning Bolt store, where the boards were sold to the public.

Lightning Bolt was ubiquitous during the 1970s, and even today it remains at the forefront of surfing’s consciousness. Unfortunately, Lightning Bolt’s history can also be read as a cautionary tale about the perils of poor brand management. Other brands and shapers shamelessly borrowed the distinctive logo, slapping it on boards that had nothing to do with Lightning Bolt.

Even “official” Lightning Bolt surfboards have a mixed history. Take, for example, the green and yellow board pictured above. The board was originally posted for sale on Craigslist in Los Angeles, where it was advertised as a Gerry Lopez Lightning Bolt surfboard. And as you can see in the second picture, there’s a clear “Gerry Lopez” laminate bearing the man’s name himself. So far so good, right?

Unfortunately, the board at the top of this post was unlikely to have been shaped by Gerry himself.

According to Randy Rarick, boards that bear the “Gerry Lopez” laminate – not to be confused with a signature – are “California Bolts” that were licensed to a variety of different businessmen around the world, including a factory in the San Diego area. Two shapers involved in the production of the California Bolts were Terry Martin and Mickey Munoz. For more context on California Bolts and the licensing of the Bolt name there is some good info on Boardcollector.com. Martin and Munoz are extremely well-respected, and for good reason; but there is a big difference between a Gerry Lopez Lightning Bolt and all the rest.

So, what does a genuine Gerry Lopez Lightning Bolt look like, then?

Here’s an example of a 1970s Lopez board that was sold at the recent California Vintage Surf Auction. Note: this board has been restored. But it does contain a clear Lopez signature on the stringer, which at the very least is meant to refer to how these original Lopez boards would have looked:

Surfboardline.com has an incredible selection of Lightning Bolt boards, where you can compare boards that have the Lopez laminate, like the green and yellow board above, versus boards where you can clearly see Lopez’s hand drawn signature beneath the glass. For an example of the latter, see the picture below:

In summary, Lopez seemed to sign many of the boards he hand-shaped. And those that he did sign, he did under the glass, in all capital letters along the stringer. Lightning Bolt surfboards will always be collectible, and rightfully so, but there’s value in exploring the distinction between a board shaped by Gerry Lopez himself, and one that he assisted in designing.

The board at the top of this post has already been taken down (asking price was $650, for those who care about price points). Even though it’s not a “Lopez” board in the strictest sense, it’s still a wonderful piece of surfing history.