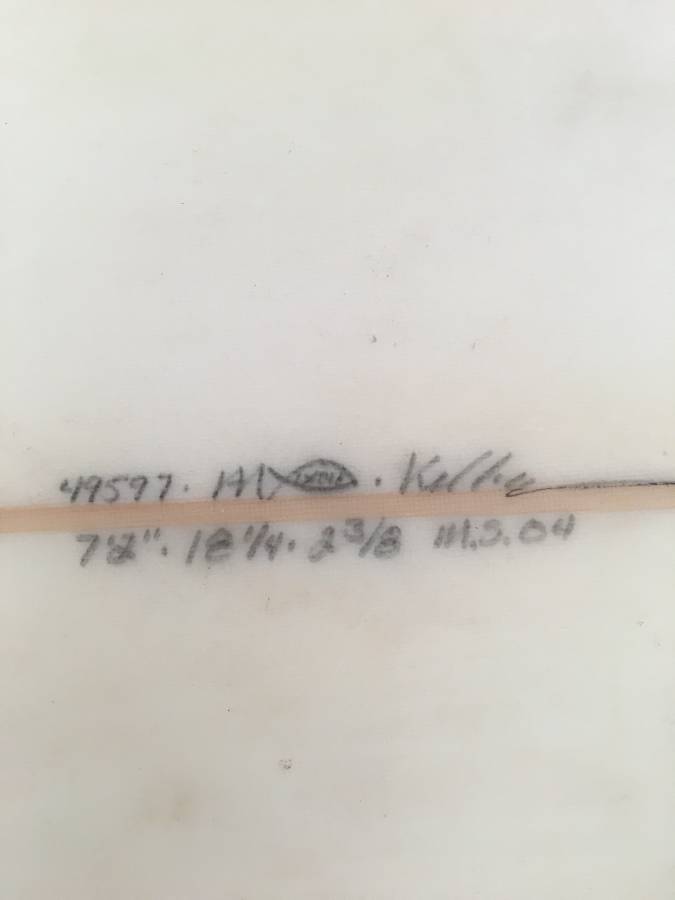 Now, I realize that 2004 might not be everyone’s idea of vintage. And you know what? That’s totally fine, because I happen to be the guy in charge of this very blog (mostly because no one else wanted the job, but I digress).

Still though, when it comes to Kelly’s personal boards, especially those that were hand shaped by legendary shaper Al Merrick, the Shred Sledz editorial staff is more than willing to bend the rules a little bit.

Pictured here is a 7′2″ Al Merrick board that was ostensibly shaped for Kelly, which you can currently find for sale on Craigslist in Hawaii.

Everything seems to match up. First, the K logo clearly indicates the board above is a Kelly Slater model that was produced during much of his time with the Channel Islands brand. While the K Board was released to surf shops as a signature model, towards the end of Kelly’s stint with CI, he simply applied the logo to a variety of designs. Here’s a shot of Kelly’s quiver from the 2011 Hawaii season, via the Channel Islands blog, that shows the K logo on a wide range of boards:

The other interesting thing about the board pictured in the first set of photos is the fact that it has a thruster setup. Nowadays, Kelly’s boards, like those of most pros, sport a five fin setup that allows toggling between a standard thruster fin configuration, and then a quad fin config for when the waves get bigger and more critical. Here’s a shot from 2014, towards the end of Kelly’s tenure with CI, that shows a five fin setup (though note the K logo is gone):

The tri fin setup indicates that the board in the first set of pictures is an older one. There’s a date on the stringer that says 2004, which sounds about right, given that the five fin configuration didn’t become popular until a few years afterwards.

Speaking of the signature, you can see Al’s trademark Al / fish signature, as well as the name Kelly written into it. This makes me all but certain this is a board Al shaped himself for Kelly. See below for an example of another Al / fish signature. It follows the same format as the pic in the set at the top of the page.

Example of another Al Merrick signature

Finally, the interesting thing is that this board, given its location and its size, was probably crafted as a step up for Kelly’s winter months in Hawaii. It seems practically outdated now, given that Kelly routinely surfs sub 6′ boards at macking Pipeline. Here’s a picture of Kelly about to paddle out at the 2016 Pipe Masters with one of his new Slater Designs boards. You can see Kelly’s 2016 board is well short of 7′2″. One of the biggest innovations in surf craft in recent years has been the downsizing of equipment in serious conditions. Leading the charge, of course, is none other than the shiny headed G.O.A.T.

For some more eye candy, here are three shots of Kelly, taken over the span of almost 25 years (!!!), that show how his equipment at Pipeline has evolved over the years:

Nowadays, of course, Kelly is working on Slater Designs, his own line of boards produced in conjunction with the good folks at Firewire Surfboards. Slater Designs offers some cutting edge, high performance shapes that were created via collaboration with high profile shapers like Daniel Thomson and Greg Webber.

For many of us, however, Kelly and Channel Islands / Al Merrick will forever be an enduring combination. And the board that’s being offered for sale, at a steep $2,000 dollars, might just be a collector’s item one day. I don’t have a crystal ball, but I can’t imagine there are that many genuine Merrick boards shaped for Kelly that will be up for grabs. Kelly is the greatest surfer ever – and the most influential – and one could make that same argument about Al Merrick and shaping as well. So it’s interesting to wonder if boards that represent this pairing will only become more valuable and meaningful over time.

You can find the board here.