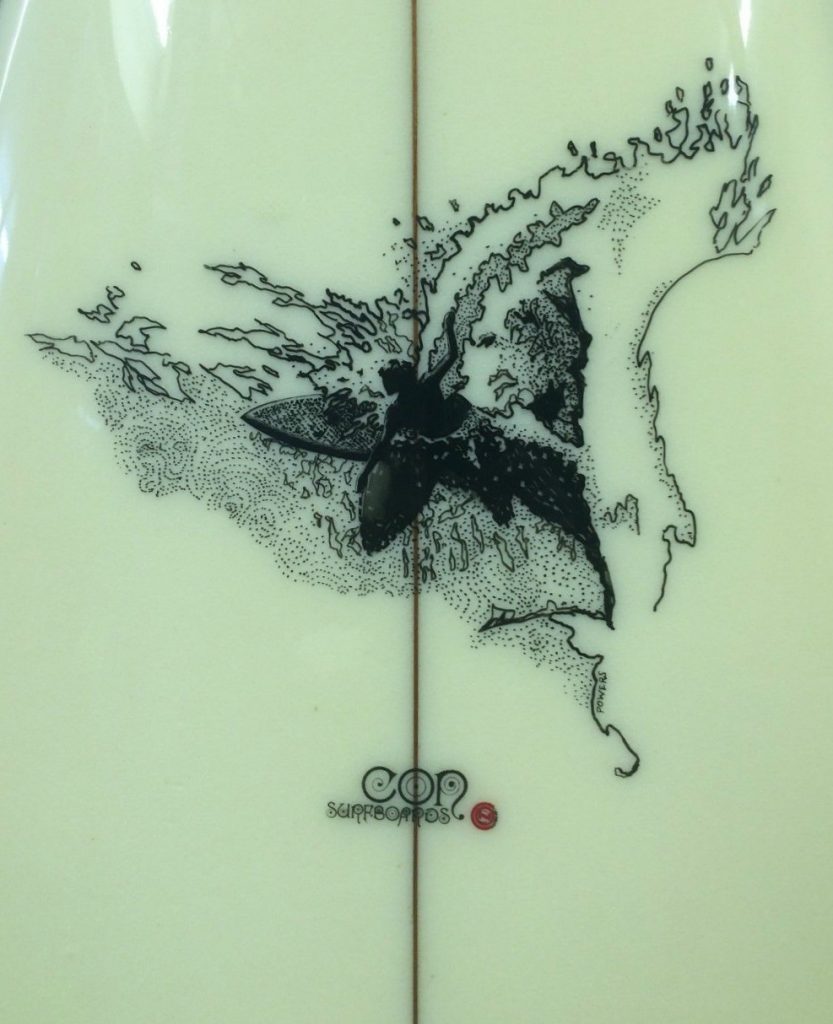 I’ve written before about my love for Con Surfboards. I’ve had some time to think about it…and I stand by everything I’ve said. I don’t know what it is but I just can’t get enough of vintage Con boards. That logo is just so killer! There’s something about the simplicity of the design that encapsulates everything I associate with the early days of California surf culture.

Enough with the pretentious prose, though: let’s get to the good stuff! In the pictures above you can see a groovy Con Surfboards sting single fin that’s currently listed for sale on eBay. The board appears to be a variant on a traditional sting design.

There are a lot of interesting things about this board, but man, check out that insane arc tail! (Honestly, I didn’t even know what to call it, until I found this helpful breakdown of different surfboard tail designs by Rusty Preisendorfer.)

The wings on the Con board are not very pronounced, and they look to be pushed quite far back compared to other sting silhouettes. For example, take a look at this Aipa sting (Aipa, of course, invented the sting). The wings on the Aipa below are wider and located further up, closer to the wide point of the board:

The Con board also sports a step bottom, which you can find on a decent number of stings. Here’s an example of a G&S sting (although I believe this is a board made in Australia, and not G&S’ native California), via the Cronulla Surf Museum, that features a clearly visible step bottom:

With that said, I can’t find any evidence of Con ever having made a sting. I’m not sure whether this was a specific model of board, or, more likely, a one-off. As for the date, Stoked-n-Board has a great entry on Con Surfboards, which has some good clues for when the board might have been made.

First, the board featured in the post has a clearly identifiable logo. It is the combination of Con’s script logo from the 70s, along with its classic red circle design. According to Stoked-n-Board, this logo was only produced between 1969 and 1974.

Those dates line up well with the other details for the board. First, you have a gorgeous rainbow fin in a fin box (not sure what kind of fin system), which points towards very late 60s and the 70s. Second, the sting was a design that came to prominence in the 70s, mostly thanks to Ben Aipa and the top Hawaiian pros of the time. According to the Encyclopedia of Surfing, the sting was invented in 1974. (See here for an earlier post on Aipa stings).

More than anything, I’m stunned that the board appears to be in such great condition. It’s almost to the point where I began to wonder if it was a retro board shaped more recently. However, I have my doubts that a retro board would have a rainbow fin, not to mention the funky details (the step bottom and the wings). My guess? The board at the top of the page is just in fantastic condition.

The board is going for $750. As far as I know, there’s no special historical significance to this thing. $750 is never cheap, but if I’m correct in saying the board is all original and in such fantastic condition, I’d argue that’s actually a reasonable price.

You can check out the board here.