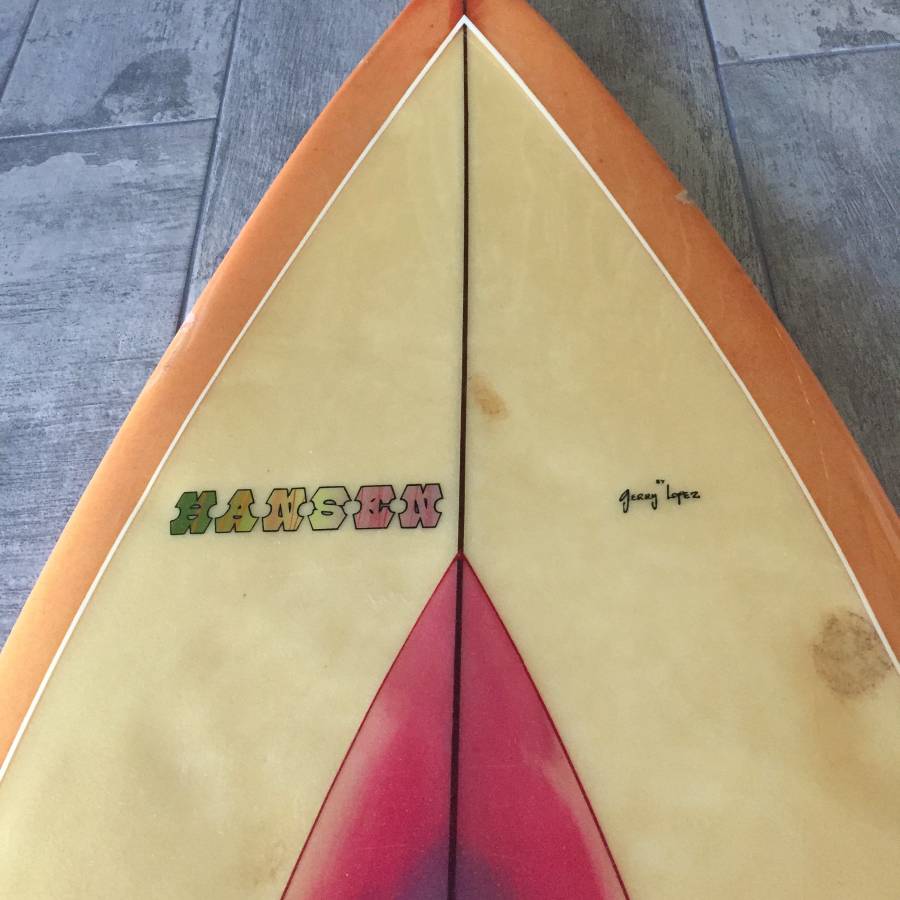 Greetings, Shredderz! I hope this post finds you during a weekend of bountiful waves and exceptional surf craft.

Regarding the latter, if you’re currently in need of a Gerry Lopez / Hansen surfboard, you’re in luck, because there’s a primo example currently up for sale on Craigslist in Phoenix, Arizona of all places. Photo by Art Brewer; via Encyclopedia of Surfing

While Gerry Lopez is best known for his work with famed surfboard company Lightning Bolt during its 70s heyday, he also produced a line of licensed boards for Hansen.

The boards from the Hansen / Lopez collaboration were not hand shaped by Mr Pipeline himself. Even so, given the relative rarity of these bad boys, you’d think that they would be more prized by collectors. Less than 1,000 of these boards were produced, according to Hansen’s blog.

Their blog also has some great photographs of another Hansen by Gerry Lopez board. I have reproduced those pictures below. You’ll notice that the board on the Hansen blog has Dart branding on it, which is absent from the Craigslist board featured at the top of this post. Another interesting detail can be found in the third picture. The “Dart” version from Hansen’s blog appears to be dated to 1972; Stoked-n-Board, however, claims that this board was only produced between 1970 and 1971. Note the “Dart” branding, which does not appear on every model 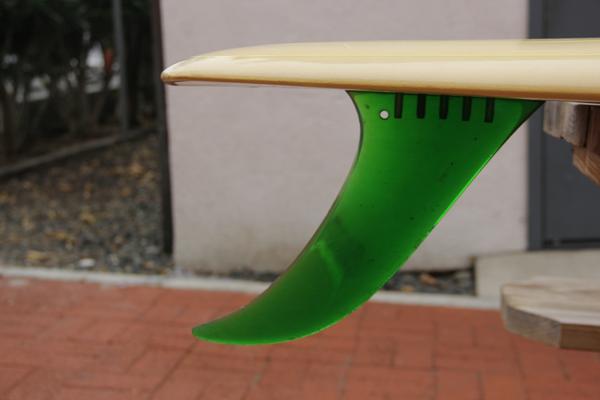 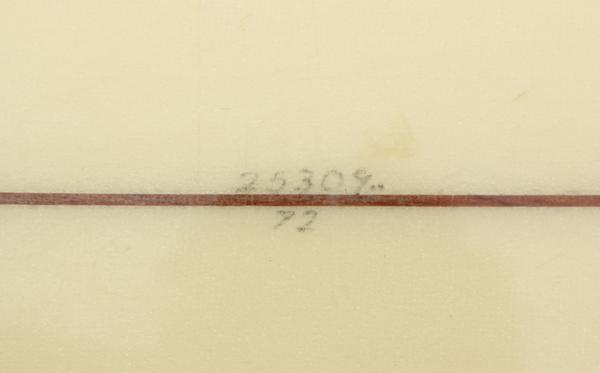 I would guess 1972 refers to the date, which contradicts Stoked-n-Board’s claim that these boards were only made in 1970 and 1971

The blog also includes a great shot of an ad announcing the board. It’s interesting how Hansen refers to it as “The Lopez Series”. You’ll also notice the board in the advertisement does not have the “Dart” branding, nor is “Dart” mentioned at all. 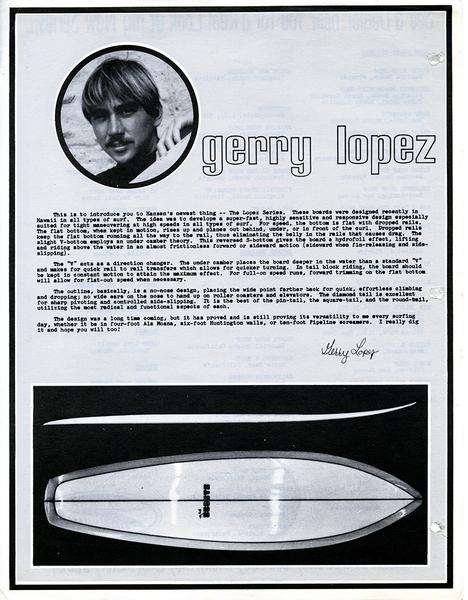 Here’s another example of the “Dart” branding on a Hansen / Lopez board, taken from a picture uploaded to Swaylocks: 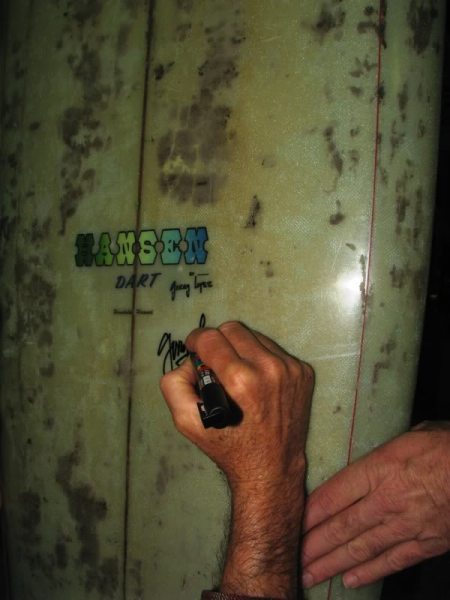 In typical Shred Sledz style, I also did some digging around the far reaches of the internet and was able to pull up some examples of other Hansen / Lopez boards. I was able to find one that recently sold at the US Vintage Surf Auction. The winning bid was $2K. This board is apparently all-original and in great condition, hence the price (which would still be considerably cheaper than a Lopez Lightning Bolt). One thing to note about the USVSA board is it boasts an alternate logo, which I have reproduced below. Note that the USVSA dates this pink logo board to 1969. I tend to believe the 1969 date, given that the Lopez / Hansen board has some properties that are shared with other Transition Era boards. The Hansen / Lopez board has a distinct S-Deck, and the ad above mentions a slight vee bottom as well. I’ve become even more convinced after finding this excellent post on the subject of Hansen hulls, courtesy of displacementia, which is one of the finest surfboard blogs on the planet. 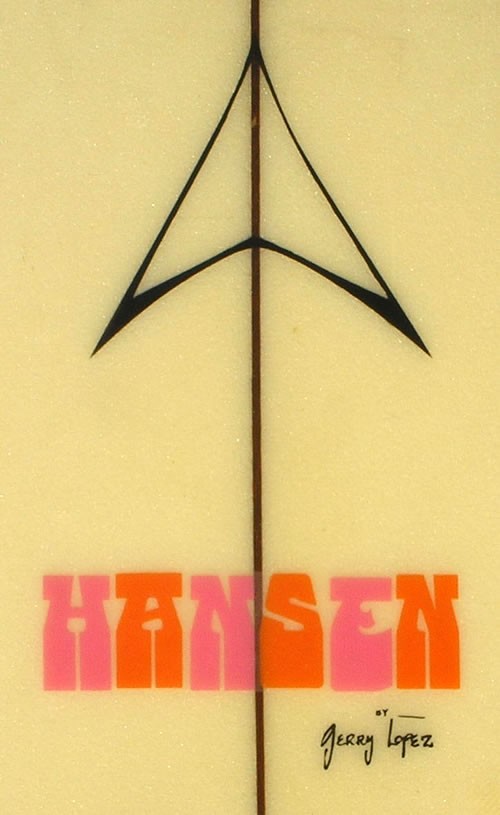 Here’s one more example of a Hansen / Lopez board. This one is for sale, but unless you live in Japan or you live for needless markup, I don’t think it’s worth the $2800 (minus tax) they are charging on usedsurf.jp. You can find a link to the Hansen / Lopez board here. Bitching about the price aside, it looks like it’s in great condition. Some other interesting notes: usedsurf.jp dates the board to the 60s, but judging by the date on the stringer it looks like it’s from the 70s, though I can’t quite make out the exact year. The Hansen logo on the usedsurf.jp board can be seen on the bottom, right near the nose — same as the Phoenix Craigslist example. 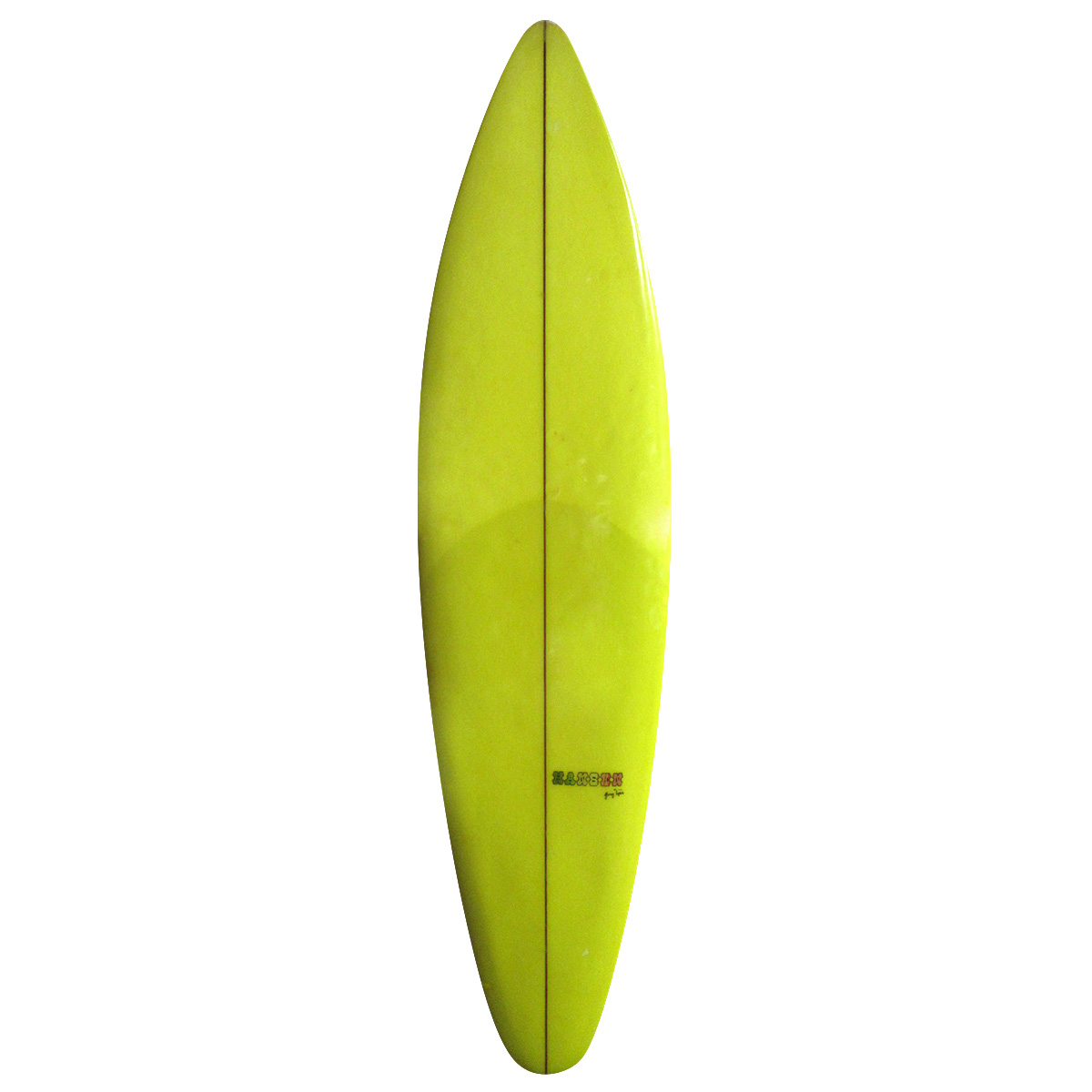 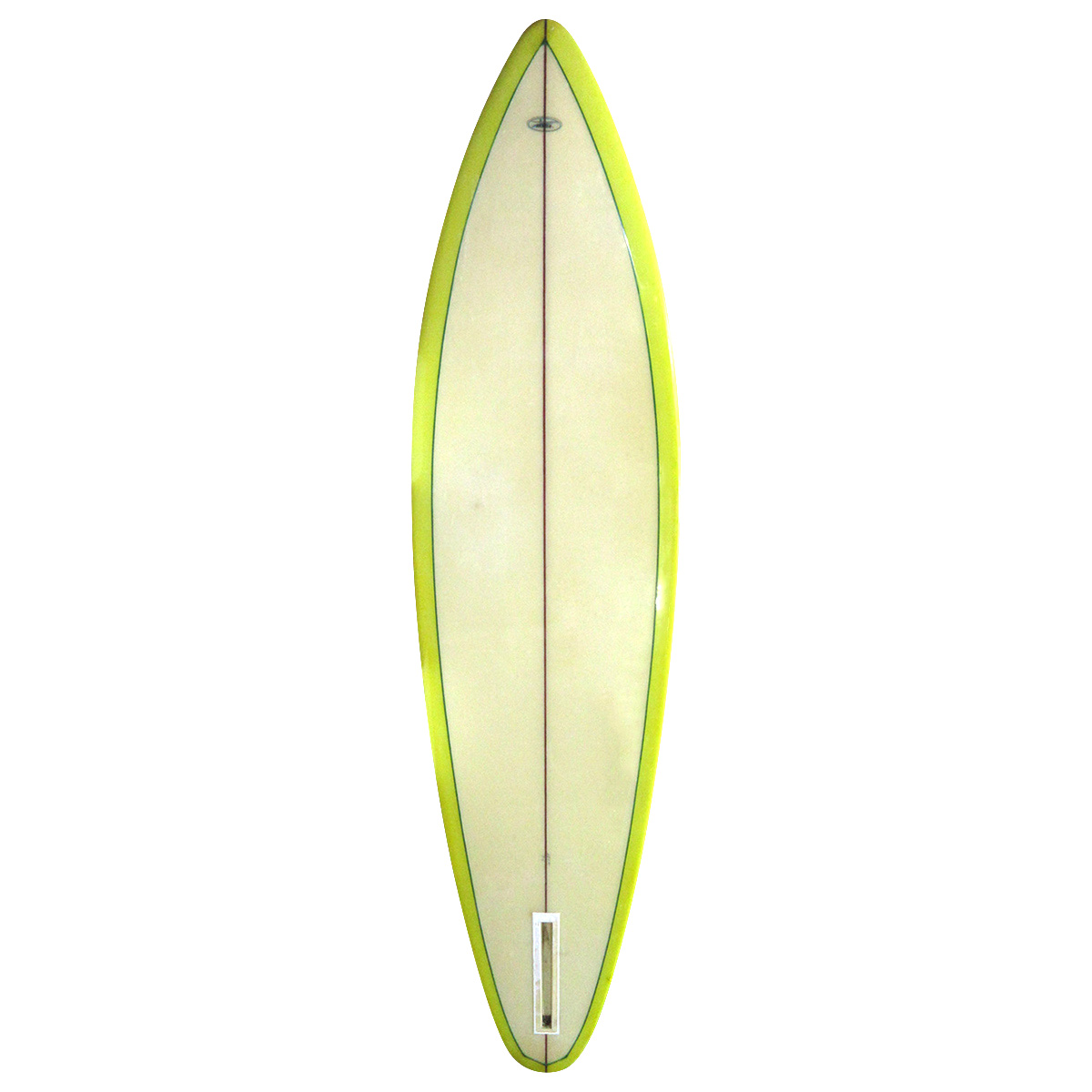 Love the subtle little Hansen logo by the nose 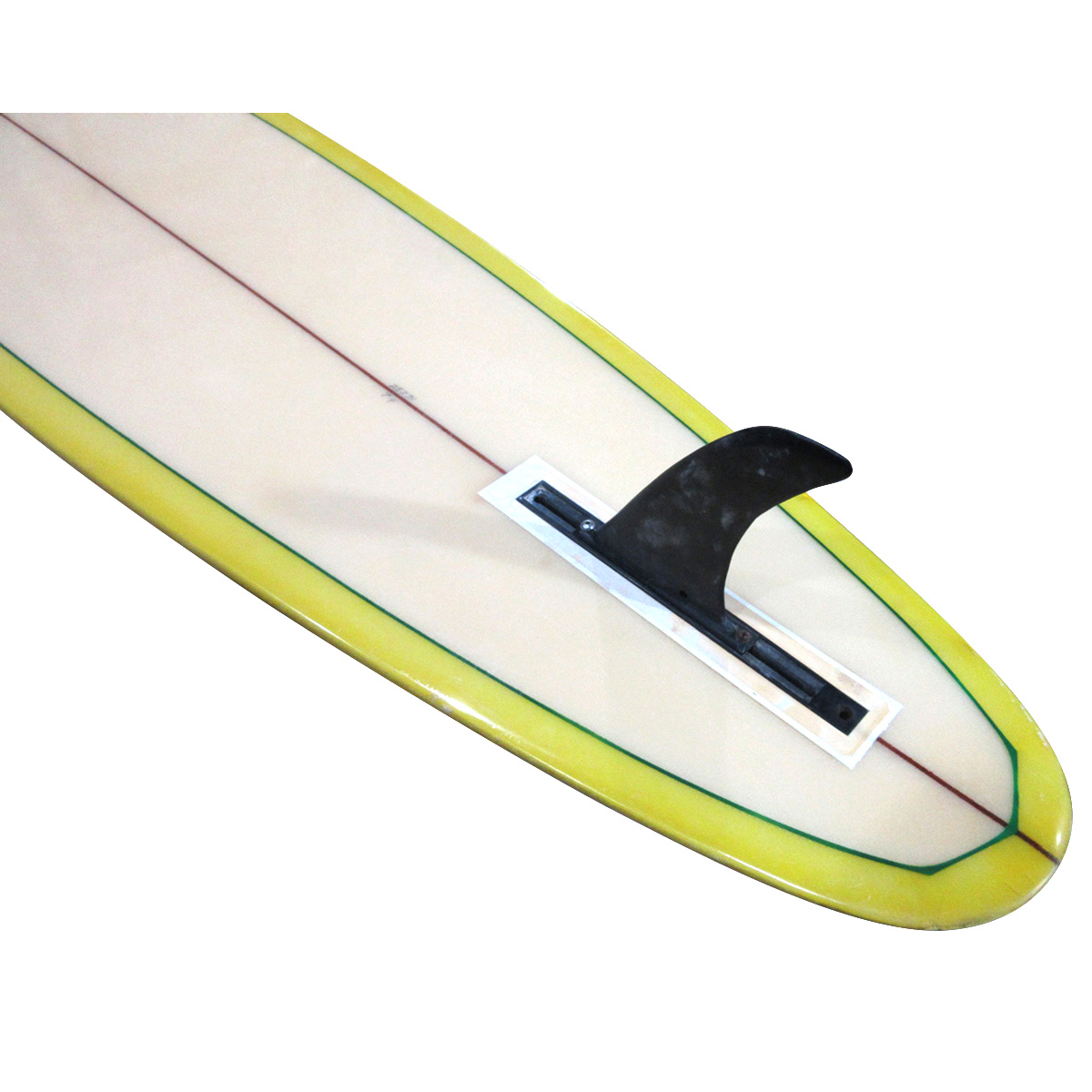 You can find the Phoenix board on Craigslist here. It’s being listed for $1,000, which I don’t think is totally insane. It’s not in perfect condition, but the board has not been totally restored, according to the poster, which I always prefer. In any event, check it out if you’re interested.