Shred Sledz is (proudly) made in California. And given HQ’s location in the Golden State (AKA my living room), it’s no surprise that the blog focuses primarily on American and Hawaiian surfboard shapers. Today I’m excited to lend a little more Aussie influence to this modest seppo-centric blog. We’ll be exploring the history and contributions of one of Australia’s earliest surf stars: none other than the late, great Bernard “Midget” Farrelly. In particular, today’s post focuses on a rare surfboard model: a collaboration between Midget Farrelly and Gordon & Smith, the famed San Diego-based US board maker. 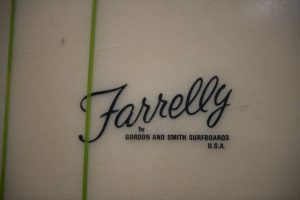 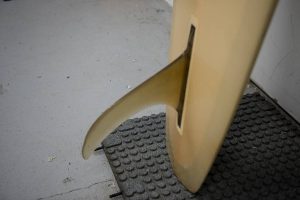 Farrelly won the inaugural World Surfing Championship in 1964. The event was held at Manly Beach, located in Farrelly’s hometown of Sydney. A few years later, Farrelly was an active contributor to the experimental surfboard designs of the Transition Era.

To this day there remains a heated debate over the origins of the vee bottom surfboard design. Bob McTavish, another Australian surfer and shaper, is widely credited with having invented the design in 1967. Farrelly, on the other hand, claims that he was the inventor of the vee bottom. He offers the picture below as proof. Farrelly claims the white board in the picture below was about 8′ x 22″ – a good deal shorter than the boards being ridden by his contemporaries – and that the picture was taken in 1967 at the Windansea vs. Australia contest in Palm Beach. Farrelly contends that McTavish did not even glimpse a vee bottom board until November of 1967, which later inspired McTavish to do his own take on the design. The Encyclopedia of Surfing, on the other hand, credits McTavish with having begun work on the vee bottom in March of 1967. McTavish says he was shaping vee bottoms at the Keyo factory in mid-1967. If you want to read more about Midget’s side of the story, I recommend going to his website. Sadly, Midget passed away last year from stomach cancer.

While the origin of the vee bottom may be contested, I think we can all agree on one thing: transition boards – and vee bottoms in particular – are very, very cool.

Pictured at the top of this post is a Midget Farrelly / Gordon & Smith design that is currently up for sale on Craigslist in Monterey, California. It’s 7′10″ in length, but no other dimensions are offered up. The price is $1200 – steep, but this is a rare surfboard, and it looks to be in good condition, other than an obvious repair on the nose. I have included more pics below: 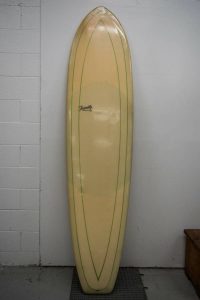 Gordon & Smith agreed to distribute Farrelly’s boards in the United States, and this is a clear example of the partnership. In the very first picture you can see the logo reads “Farrelly by Gordon and Smith Surfboards USA”.

However, it’s unclear to me exactly what model this is. Gordon & Smith – it’s interesting to note that the logo on the board reads “Gordon and Smith”, and doesn’t contain the customary ampersand – produced a Midget Farrelly Stringerless model. Stoked-n-Board has the Farrelly Stringerless model as having been produced between 1967 and 1969, which means it pre-dates the creation of the vee bottom. Here’s an example of a G&S Farrelly Stringerless model, and you can see that it is longer and more of a traditional longboard shape than the board listed at the top. It’s listed at 9′6″, and Surf Research actually dates the board to 1966, a full year earlier than Stoked-n-Board. Either way, it’s clear that the board below is a different model from the one at the top of the post – it’s longer, it has a fuller nose, and it has a different logo.

Here’s a close up of the G&S Farrelly Stringerless logo (from a different board).

And here’s an old print ad for the G&S Farrelly Stringerless model. Note that this is clearly more of a standard longboard / noserider design – pre-Transition Era, I’m guessing. Note that this version of the logo has numbering. I’ve seen Stringerless logos without numbers.

G&S has another old ad up on their website, which shows the Farrelly Stringerless design alongside a Skip Frye and a Mike Hynson design.

I’ve found pictures of the Farrelly V Bottom model elsewhere online, and here are a few examples. In this one below you’ll note that it has a tunnel fin, which I believe was added afterwards.

This board below – which I found floating around on Pinterest – looks like an exact match to the one at the top of the page. It has similar deck patches, logo placement, and of course the overall outline. The picture below also gives a better idea of the vee in the tail, which is of course one of the defining characteristics of the board.

The board for sale can be found here on Craigslist (Update: Link has been removed). The seller also looks to be getting rid of some other gems, including a Morey Pope Tracker and a mystery David Nuuhiwa model. None of the boards are cheap, but they look well cared for. I’m wondering if these weren’t all at some point part of a larger collection in the Monterey area that was sold off a few years ago.

Finally, while we are on the topic of Australian surfing luminaries, I cannot recommend surfresearch.com.au enough. This article on 1967 and the creation of the vee bottom is incredibly thorough and detailed, and a real treat for anyone who’s interested in the topic. The same can be said for surfresearch.com.au’s entry for Farrelly himself, which is a fitting tribute for a true legend of the sport.