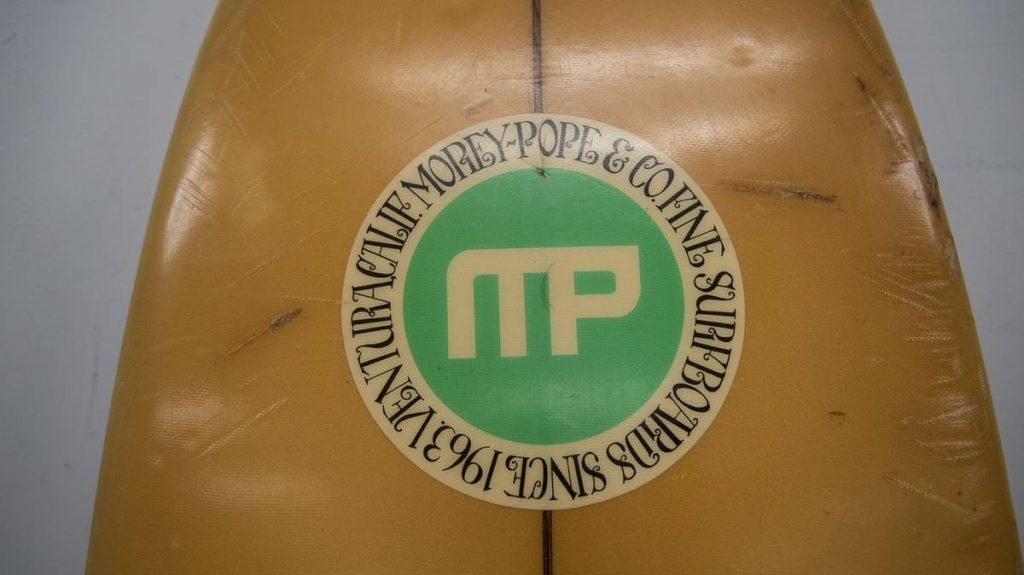 Morey Pope Surfboards is a brand I have written about a few times before, and I don’t think I’ll ever get tired of it. Morey Pope occupies a funky little corner of surf history. Co-founder Tom Morey, who apparently now goes by the Prince-esque name “Y”, might be one of the most innovative and interesting people in the history of surfing, having invented the bodyboard and Slipcheck traction, among others.

Anyway, right now there are two neat examples of Morey Pope Surfboards for sale, neither of which is priced in the stratosphere. Both boards aren’t perfect by any means, but the Shred Sledz motto might as well be “it’s always free to look.”

The first Morey Pope board can be found on the excellent Instagram account Red Dot Goods. They are first rate purveyors of various pieces of surf nostalgia, including some rad boards. They have a Morey Pope Sopwith Camel model up for sale, which you can see in the pic below. $750 doesn’t sound insane, but as always the usual caveats apply — check to see if there are any soft spots / delams, any dings, etc.

I’m unclear on whether or not the Morey Pope Surfboards Sopwith Camel model is one and the same as the regular Camel. For example, see below for a picture of an old Morey Pope Surfboards ad that clearly refers to a Camel model, with no mention of Sopwith. You’ll also see that the Camel logo is nowhere to be found on the board in the pic below. I’ll save you the Googling, if you’re curious — apparently the Sopwith Camel was a British biplane in World War I.

Here’s another example of an excellent Sopwith Camel, from surfboard collector galore Buggs, who runs Surfboardline.com (currently down, please tell me this is just a temporary hiccup!)

And here’s another example of a Sopwith Camel that I was able to find on Photobucket.

The second board that is for sale is a Morey Pope Surfboards McTavish Tracker, which can be found on Craigslist in the Monterey Bay area. The board looks like it has been well used and frequently repaired over the years. It’s being offered at $500, which I think is reflective of its condition (and apparently there are more repairs that still need to be made).

These are two cool Transition Era designs from a couple of legendary surfboard builders — including, of course, Australian shaper Bob McTavish‘s influence on the Tracker! Hope you enjoyed this comparison of two cool boards from a storied surfboard brand of yesteryear.