Greetings, Shredderz! I hope your weekend was chock full of uncrowded lineups and good times. As always, here is a smattering of a few boards that caught my attention over the past week.

First up is an orange Morey Pope mini-gun. It’s in the 7′ range and it’s on sale for $650 on Craigslist in Carlsbad, right near San Diego. Check out the logo on that thing, too — I couldn’t find a similar one on either Stoked-n-Board or Stanley’s.  The outline is very reminiscent of a Yater Pocket Rocket. I found a Swaylocks thread detailing a 1969 (estimated) Morey Pope “Power Dude” model, which also looks extremely similar to the orange board. At the risk of sounding financially irresponsible, I don’t think $650 is that crazy. Then again, Mrs. Shred Sledz likely has a very different conclusion, so take that with a grain of salt…

The other Morey Pope board for sale is the white board pictured in the gallery above. It can be found on Craigslist in Santa Barbara, where the seller is asking a cool $1K. The poster claims it is likely an early predecessor to the Camel model. Check out the very clear numbering, too.

If you’re still not satisfied with the amount of Transition Era weirdness served up by these two boards, here are yet two more Morey Pope sticks for sale: first is a hollow W.A.V.E board, going for $500; and then a Morey Pope McTavish tracker, also $500, which I wrote about previously. They’re being sold by the same collector so this could be an attractive package deal.

No link for this one, because you snooze, you lose! This vintage Chuck Dent bad boy went up on Craigslist in Jacksonville, Florida for a jaw-dropping $100 and then someone pounced. Check out that floral print on the bottom, which is extremely reminiscent of the Bing floral print boards from a similar era. Here’s an example of a very similar board, via the Encyclopedia of Surfing: 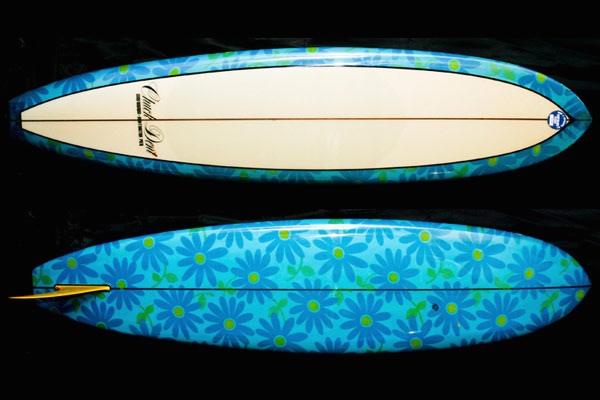 Pic from Encyclopedia of Surfing

Ah, well. Our collective loss is someone else’s gain. If you are the eagle eyed board aficionado who snapped up this thing, please comment below!

Yater Spoons for Sale on Craigslist

It’s not too late to find some deals online: check out these Yater Spoons on Craigslist on Venice, LA, which are listed for $150 (red) and $125 (blue). The blue board is definitely a Renny hand shape — you can see the signature in the pic above (look at the “R. Yater” above the measurements). These boards aren’t in perfect shape but I think these prices are practically criminal. Get ’em while you can.