Yeah, yeah…it’s not the weekend. But we live in the age of alternative facts, so I’m not going to let something as trivial as accuracy get in the way of giving you a little taste of the coolest vintage surfboards that are currently for sale online. Without further ado, here goes…

No link because the board already came and went. This board was sold on Craigslist in Santa Cruz and it vanished after a short time. The seller was asking $850, which is below market price if you ask me. Looks like it’s in decent condition, though there are some obvious repairs that have been done. Check out a similar Skip Frye vee bottom that went for auction recently, with the price estimate between $700 and $2K. Skip modeled his v bottom designs on the models pioneered by the Aussies — you can read a bit of history on  his website. This is such a sick board and I hope whoever owns it now is putting it to good use. This is a slightly unusual Harbour surfboard I had never seen before. According to Stoked-n-Board, Harbour produced a diamond tail between 1994 and 2015. I would guess this board is from sometime in the 90s. The Terry Simms logo is an interesting touch, and there’s no evidence of another one on Stoked-n-Board’s archives. Oh, and the board is cheap! $500 and it’s in decent condition. Apparently Rich is charging an extra $500 these days for custom shapes, so by that logic, this one is practically free! (Ms. Shred Sledz may object to the math on that one.) Board can be found here. 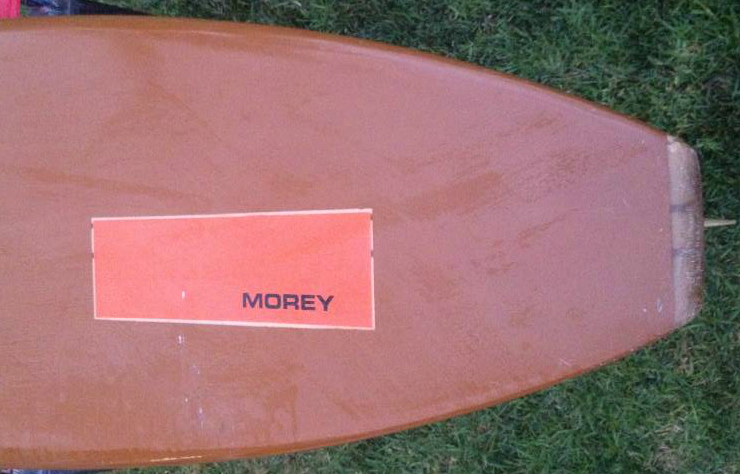 Tom Morey is every bit as odd as he is influential, which naturally makes him a Shred Sledz favorite. The board pictured above is an old Morey longboard that can be found on Craigslist in LA. The board is 10′ long and it’s going for $800. I’m starting to think that the board was restored and the brown color is a coating meant to disguise damage to the deck. More importantly, though, I can’t find an example of this logo online, nor any dates of when the board might have been made. Stoked-n-Board claims Morey started making boards in 1955, and then combined with Tom Pope to form Morey-Pope in 1965. By that math, and the traditional longboard outline, I would hazard a guess that this board is from the early to mid-1960s, but don’t quote me. Anyway, check out the board here.

Is it me or have surf company logos gotten worse over time? Nowadays they’re all vague approximations of a wave shape. O’Neill’s current design can charitably be described as bland and passé — yes, Shred Sledz is a blog that uses proper punctuation on French words — but I love their old school design. Look at the first picture above, and that slightly cubist take on a wave, along with the familiar Clark Foam bar logo. Anyway, I won’t bore you with my extended thoughts, except to say there are two old school O’Neill boards for sale on Craigslist. The first two pictures correspond to what looks like a late 1960s longboard that can be had for $950: link here. The board is located in its ancestral home of Santa Cruz. The third picture, which looks like a transition shape, and I would also guess the late 1960s, is a funky little mid-length for sale on Craigslist in New Jersey: link here. No price on the jersey board, but the bottom is a little beat up. Anyway, these are two cool examples from the days of yesteryear, when surf clothing brands had yet to discover that surfboards are, in fact, a not very profitable business.