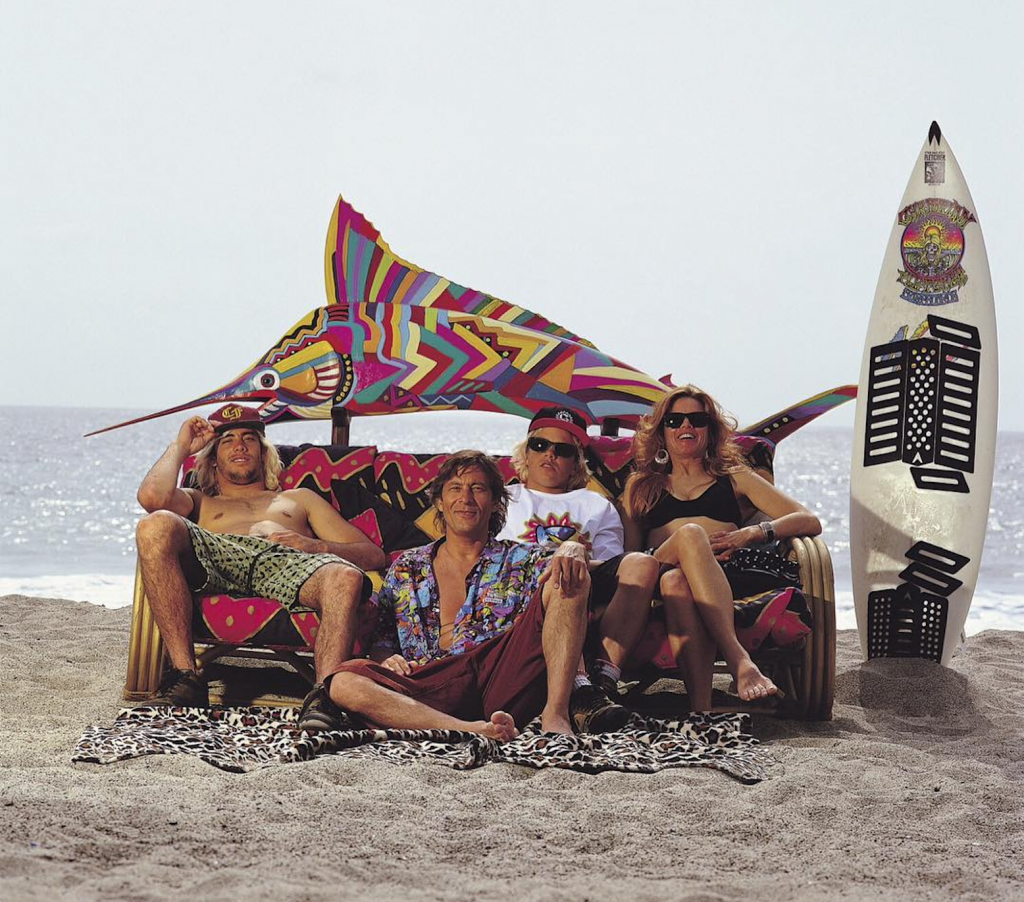 Surfing is a sport with more than its fair share of characters. And even by this standard, the combined Hoffman / Fletcher clan stands out for its per capita density of colorful personalities.

As a quick aside, while previous posts have covered various members of the extended Fletcher family, none have made mention of Dibi Fletcher (nee Hoffman). Dibi is Herbie‘s wife, and in addition to being the mother of Christian and Nathan Fletcher, both of whom are renowned pro surfers, Dibi plays a large role in running the day-to-day business of Astrodeck. Like Herbie, Dibi is descended from veritable surf royalty: her father, Walter Hoffman, was an early big wave surfer and surfwear industry pioneer, and sister Joyce was an early female pro, as well. See below for an incredible old ad Joyce Hoffman did for Triumph, of all brands.

Booming surf.Roaring engine.A pretty girl's smile. Triumph Spitfire Mk2. Why did "The Blonde Goddess of the Waves" select the Triumph Spitfire Mk2 as her official beach buggy? All Joyce said was "It's so me!" Ad copy #triumph #1966 #mysister #joycehoffman that's so hot!!! #surflife #surfhistory #tbt

RVCA, which has a history of collaborating with the Fletcher family, trained the latest episode of its “Inspired by…” video series on Herbie and the story behind the famed Astrodeck brand. The video coincides with the release of a new RVCA x Astrodeck collaboration. You can find more detail on the collaboration here.

And while the new RVCA project is focused on Astrodeck, the surfboard traction company that Herbie and family built into one of the original surf accessories brands, given that this is a vintage surfboard blog, we can’t let this entry go without highlighting some of Herbie’s shapes!

There’s currently a Herbie Fletcher-shaped single fin for sale on Craigslist in New Jersey, and you can find pictures of it below. Link to the Craigslist post for the board can be found here.

There are some open dings on the board that will need a bit of work to get it water tight. Click through to the listing for more details. Even though the board needs work the spray job has been beautifully preserved. I’m intrigued by the combination of a single wing pintail along with the twin fin setup, which feels unusual to me. There’s no signature on the board anywhere that I can see, but I don’t know that Herbie ever signed most of his boards.

According to Stoked-n-Board, some of Fletcher’s boards were subcontracted out to other shapes. Unfortunately, I have no way of knowing whether this one was shaped by Herbie himself.

There’s an Instagram user who found an old Herbie board in Baja at a surf shop near K38. He has some clear pictures of the board, and even some footage of him surfing it! It looks like a rad 70s single fin.

Mexico Score! Traded one of my back-up boards for this 1970's 7' Herbie Fletcher single fin… Saw it sitting in the corner of K38 surf shop @herbiefletcher @dibifletcher @astrodeck @christianfletcherlives

You would think that there would be more information available online about Herbie’s boards, but sadly, it takes a bit of digging. If any of you eagle-eyed readers have more examples of Fletcher’s handshapes, I would love to see them!