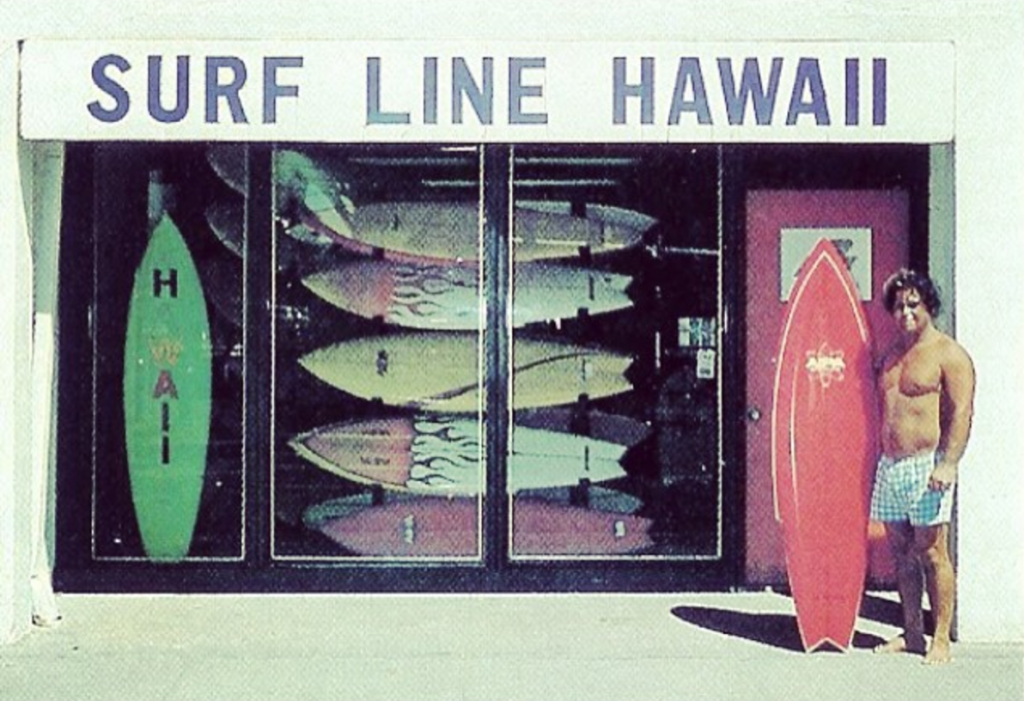 Greetings, Shredderz, and welcome to the latest Shred Sledz Deep Dive! Today’s Deep Dive features a venerable Hawaiian surf brand that has long deserved a closer look: Surf Line Hawaii. Before I get into the history, though, let’s skip right to the good stuff: pictures of awesome surfboards.

First up is a single fin shaped by none other than respected Hawaiian shaper Dennis Pang. Pang got his start at Surf Line Hawaii in 1976, before moving on to some of the most recognizable Hawaiian brands, like Lightning Bolt, Town & Country, and Local Motion. The board below was originally listed on eBay (pics originally found on the eBay post).

This thing is clean and mean. I love the black & white color scheme and the pinlines, with just a touch of color on the logos on both rails. I was a bit stunned when the board didn’t sell for $450, considering that another Surf Line board by Dennis Pang sold for $1800 ten years ago!

Surf Line Hawaii began as a surf shop on Oahu. It was founded by Dave Rochlen, and I believe Fred Swartz as well. By the time the shortboard revolution started in earnest, the shop began to put out boards under its own label.

I was blown away when I saw all the well-regarded shapers who passed through Surf Line over the years. According to Stoked-n-Board, Ben Aipa, Randy Rarick, Tom Parrish and Michel Junod, in addition to the aforementioned Dennis Pang, all shaped for Surf Line at some point! 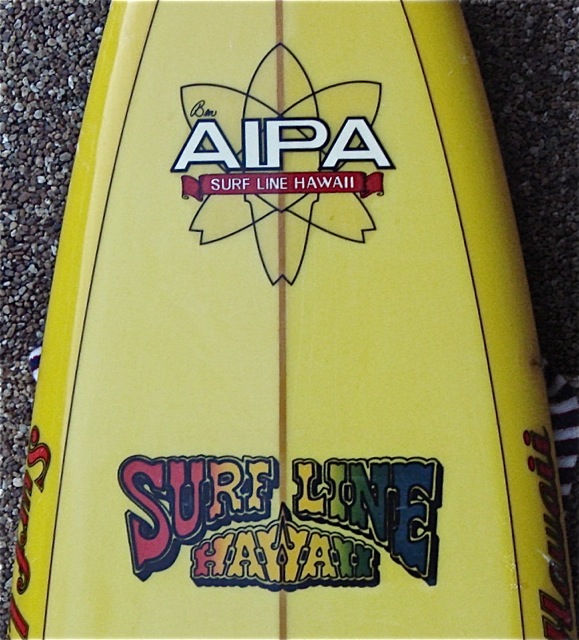 Aipa for Surf Line Hawaii. Board was made for Tony Moniz in 1981. Tony is a former pro and father to Josh and Seth, two up-and-coming Hawaiian pros in their own right. Pic taken from Boardcollector.com

However, I was even more shocked when I found out that Lightning Bolt’s famed core group — Gerry Lopez, Reno Abellira and Barry Kanaiaupuni — were all early Surf Line shapers. Lopez actually spent some time working in Surf Line’s offices on the business side. 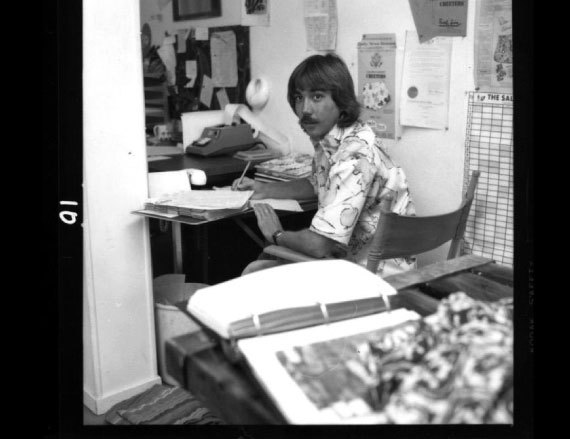 Here is a great Surfer Magazine interview with Tom Parrish that expands on how a bunch of Surf Line employees broke away to found Lightning Bolt. Bolt was founded by Lopez and Jack Shipley, the latter being Surf Line’s top salesman at the time. Shortly thereafter, Reno, Barry and co followed Lopez and Shipley out the door. It’s really saying something when it’s hard to find space to mention Dick Brewer‘s involvement with Surf Line, as well!

The board pictured below was shaped by Barry Kanaiaupuni. It was sold at the Hawaiian Islands Vintage Surf Auction in 2007, where it went for a mere $1,000 (anyone have a time machine handy?) Pics were taken from the auction site (original link here). I love everything about this board: the listing calls the bottom a “root beer” color, the purple fin pops, and I love the logo, with its clean lines and two-tone color job.

I’m fascinated by Dumphy’s boards. While they seem to be coveted by a segment of collectors, Dumphy shapes don’t seem to generate the same excitement as those from shapers like Barry K, Reno, and of course Gerry himself. Still, Lopez’s respect for Dumphy speaks volumes about his abilities as a shaper. Sadly, Dumphy passed away as the result of a car accident sometime in the 1990s.

The single coolest Dumphy board I was able to find online was posted by HolySmoke.jp. I have no clue if the board is for sale but that airbrush is absolutely killer! 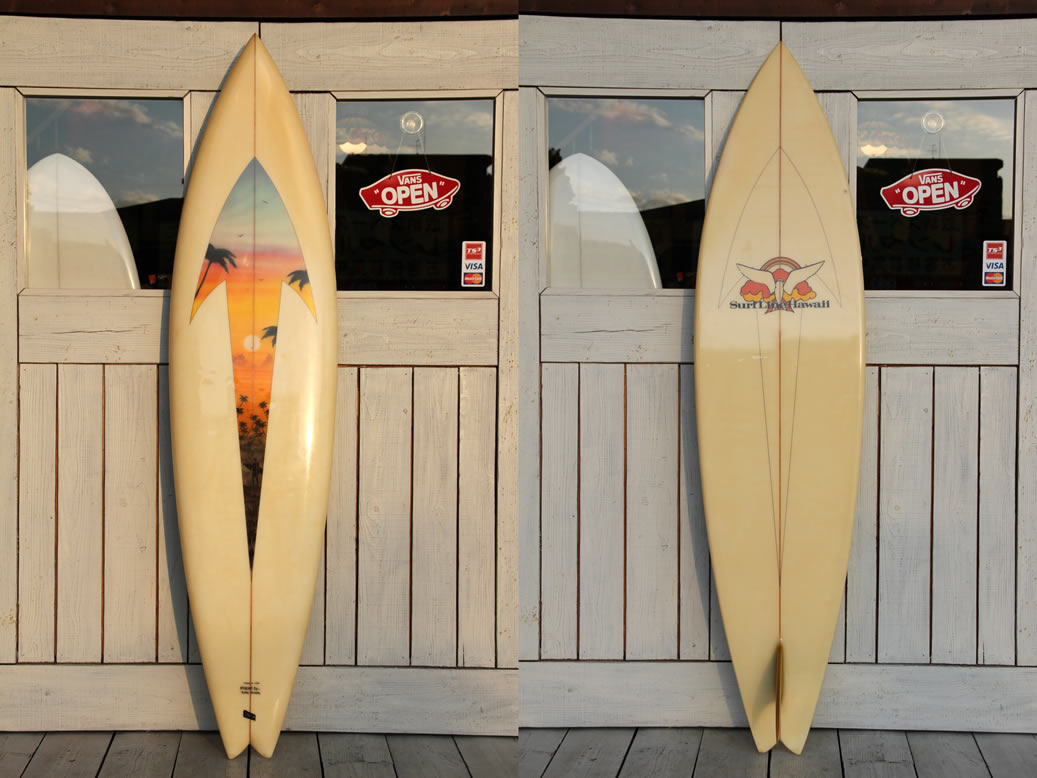 The 70s were a great decade for surfboard airbrushes… Here’s another Dumphy single fin, which was also sold at the Hawaiian Islands Vintage Surf Auction in 2007. I love the plumeria logo on the deck. It looks like this thing was shaped in the 70s for some serious North Shore surf. Pics taken from the original auction listing.

I was able to find a few Dumphy boards currently for sale online. There’s one currently for sale at New Jersey’s Brighton Beach Surf Shop, and it’s only listed at $450. Link to the board can be found here. I think it’s underpriced, considering the history of both the brand and Dumphy, but then again, the Pang board at the top of the page failed to clear the same $450 mark.

Surfboardhoard.com has a different Dumphy Surf Line Hawaii single fin for sale, but they don’t list the price. I’m going to go out on a limb and guess that it’s north of $450. You can find that board here.

Surf Line Hawaii has such a rich history and a deep stable of shapers, it makes it hard to spotlight just a few boards! Standard Store / UsedSurf.jp are selling two other 70s single fins. Note that because the boards are in Japan, the prices are much higher. But they illustrate the wide variety of cool logos that Surf Line employed throughout the years. Boards can be found here and here (pictures below taken from Usedsurf.jp). The boards are credited to Steve Wilson / Welson (guessing the difference is a translation issue), but I couldn’t find any evidence of a shaper by that name. If anyone has some details, let me know!

Finally, no Surf Line Hawaii post would be complete without a mention of Randy Rarick. In addition to organizing the Triple Crown of Surfing, putting on auctions like the aforementioned Hawaiian Islands Vintage Surf Auction, Rarick restores old surfboards. There is currently a Surf Line Hawaii board for sale on eBay that Rarick restored. The board is not a Rarick shape, but rather, it was made in 1971 by Ryan Dotson. You can find a link to the board here, and I have included some pictures below as well. (Pictures are from the eBay listing.)

Believe it or not, I haven’t even covered all of the Surf Line Hawaii shapers, like Rick Irons and Sparky Scheufele! If nothing else, that speaks to the incredibly deep collection of shapers that passed through the brand over the years. Sadly, Surf Line Hawaii no longer seems to be in business. It seems as if they stopped producing surfboards long ago (I would guess sometime in the 1980s or 1990s, but that is just a guess), and a Yelp listing indicates that Surf Line’s Honolulu retail location has closed, too.

Nonetheless, Surf Line Hawaii played a prominent role in the Hawaiian surf scene, and remains one of the most impressive collections of shaping talent ever.

I hope you enjoyed this Deep Dive! If you have any pictures of any Surf Line boards you would like to share, or any comments at all, please reach out via the Contact section. Thank you for reading, and may your stoke levels remain high and rising!

Featured Image at top from @aipasurf on Instagram. Original link to photo here.