Now here’s something you don’t see every day: a Dick Brewer vintage sting surfboard. The board is currently for sale on Craigslist in New York (pics via the Craigslist posting), and you can find the listing here.

As you can see, this Brewer Sting has a dramatic outline. There are no dimensions listed on the board, but it looks pretty long — I would guess 7′ plus, but there’s no way of knowing for sure. The wings on the side of the board are placed fairly high up as well. I would describe this as a thumb tail, which is slightly unusual for Stings. You tend to see more swallowtails and pintails on Sting shapes. The triple stringer is another unusual touch.

The Craigslist poster claims the board was shaped in 1975, which sounds right to me. The first giveaway is the Sting design itself, which is an iconic seventies shape. Other details point to a similar date, such as the glass-on fin.

The Sting, of course, was invented by Ben Aipa, and is still one of the more recognizable designs from the seventies. I had never seen an example of a Sting shaped by Brewer, but a bit of online research reveals that Dick Brewer dabbled with Sting designs during this time. See below for a picture showing Brewer sitting next to a Sting that bears his plumeria logo. Dick Brewer in the Seventies, sitting with some of his creations. Pic via Surfer’s Village / California Surfing Museum

The second board from the right has a clear — and pretty dramatic — Sting shape. Contrast it with the other boards in the picture, which sport the winged designs that Brewer was experimenting with in the seventies.

Here’s an even better shot of Brewer holding a Sting design. I couldn’t find any info on when the photo was taken and by whom; if you have any details to share please let me know! 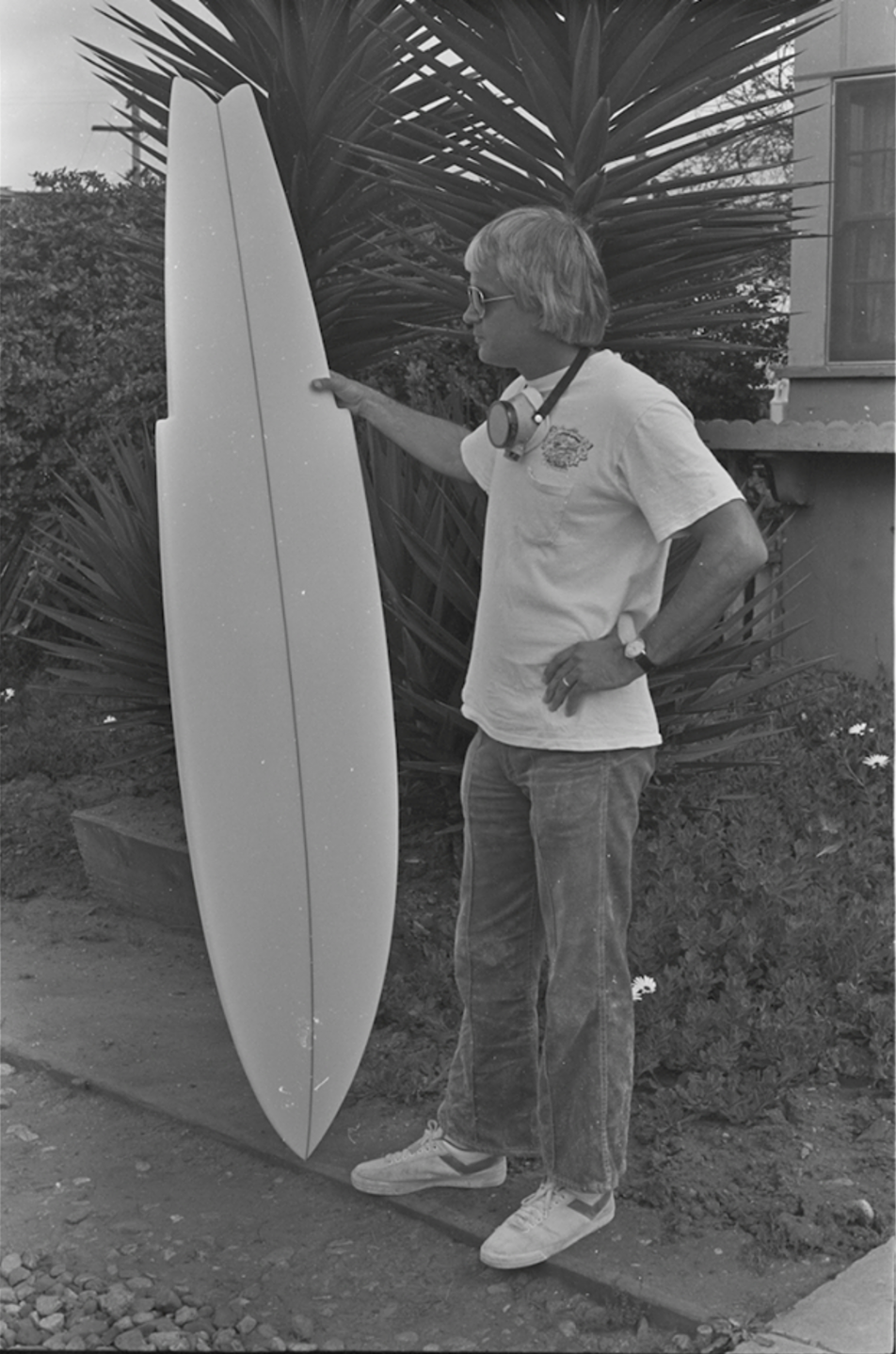 Aussie vintage surfboard purveyors Von Weirdos recently sold a Dick Brewer vintage Sting in excellent condition. The board is no longer for sale, but luckily there are still pictures up on the Von Weirdos site, along with a description of the board. You can find the link here and I have also included some of the pictures below. 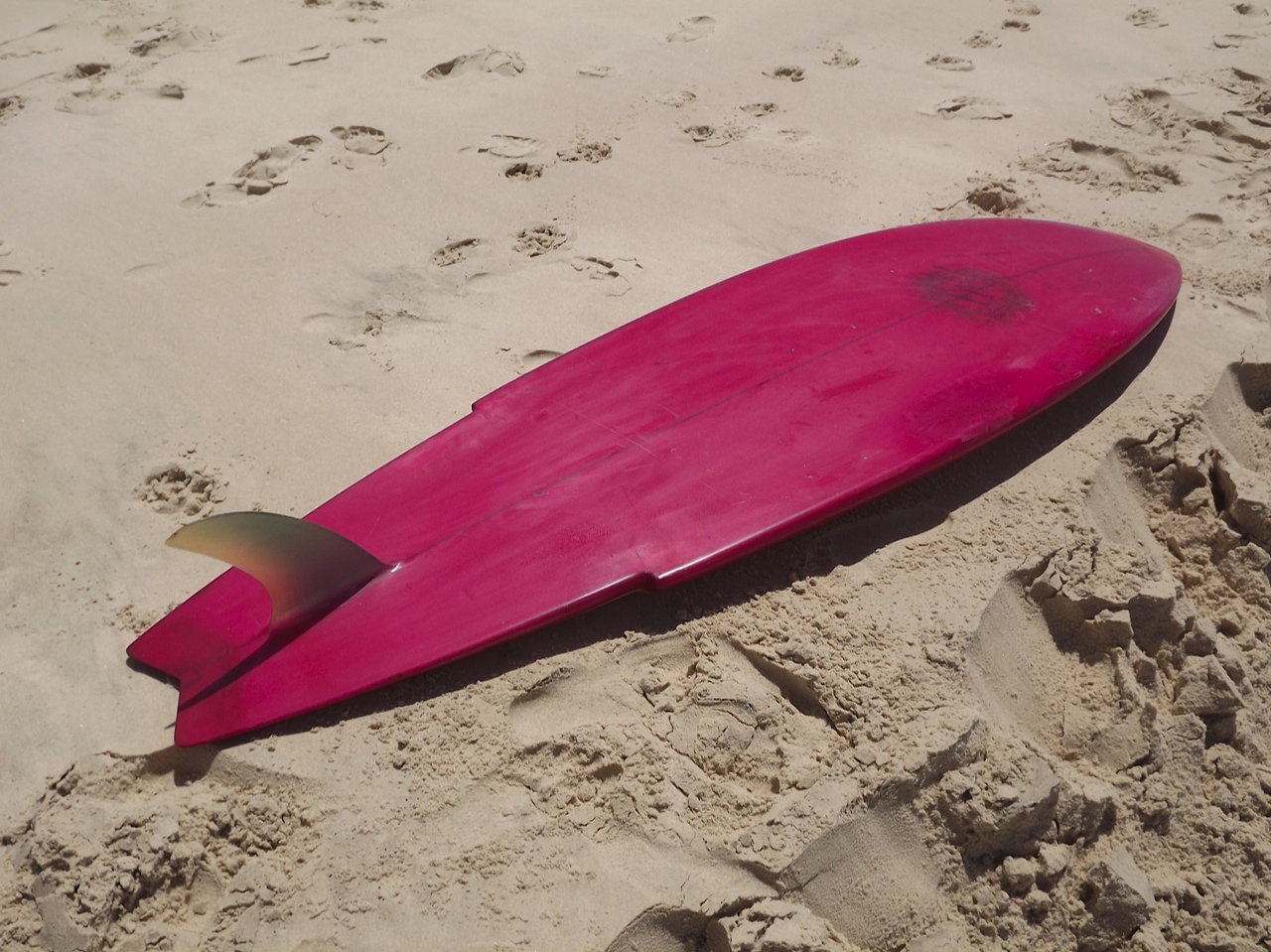 The Von Weirdos Brewer Sting is listed at 6’3″ x 20″ x 2 1/2″. The Von Weirdos Sting looks considerably shorter than the Craigslist Sting at the top of the page. In addition, you’ll notice the wings are located much further towards the tail. The wing placement is particularly noticeable in other shots of the board.

Finally, I was able to find another example of a Dick Brewer sting, this time via French surfboard site Daniel’s Longboards. I have included the picture below. You can find the link to the original board posted on Daniel’s Longboards here. Another beautiful looking Dick Brewer vintage sting. Note the fluted wings on the board. Pic via Daniel’s Longboards

Note the fluted wings, and how this creates miniature channels on the bottom. You can see the dimensions watermarked in the picture: 6’6″ x 21″ x 3 1/8″. The Daniel’s Longboard Sting and the Von Weirdos Sting seem to be very similar boards in a lot of ways, given the wing placement, the swallow tails, and the overall length and outline. Both boards look shorter and fatter than the Craigslist Sting.

The Dick Brewer vintage Sting for sale on Craigslist is going for $900. That’s pretty steep when considering the condition of the board. There’s also the small matter that there doesn’t appear to be a Brewer signature anywhere on the board. This doesn’t mean it’s not a Brewer hand shape, but it’s something to consider. On the other hand, Dick Brewer will always be considered one of the most influential shapers in history, and I believe his vintage boards will only become more collectible over the years. I have a personal soft spot for the Sting, and this is one of a handful of vintage Dick Brewer Stings I have seen, much less for sale. Even though this board is beaten up and on the expensive side, I’m hoping someone will buy it and get Randy Rarick to return it to its former glory.