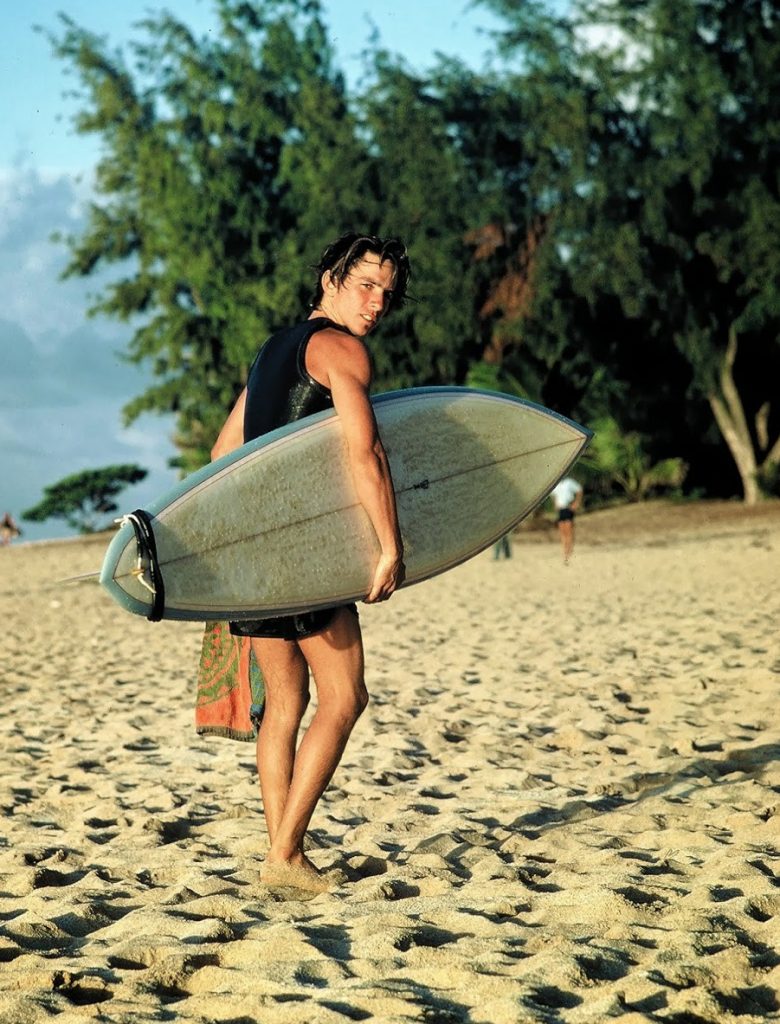 Let’s face it: no one would ever confuse Shred Sledz with real journalism. The upside is that we don’t have to pretend to be objective. Case in point: Shawn Stussy is a blog favorite, and until he says something nasty about us, that’s not likely to change. Stussy got his start shaping surfboards in Southern California. He printed up t-shirts for his fledgling brand, and soon his namesake company ended up becoming a streetwear juggernaut. And while Stussy’s best-known and most coveted surfboards are from the eighties, Stussy began his shaping career at a different Southern California brand: Russell Surfboards. For all you fellow Stussy-philes, there’s currently a Russell Surfboards Shawn Stussy board for sale on Craigslist. You can find a link to the board here. I have reproduced some of the pictures below.

The poster claims the board was shaped in 1973. It’s not surprising to hear that date given the outline and the dimensions of the board: 7’5″ x 19″. The coolest part of the board is the hand drawn Stussy logo, which you can see at the top of the page. Stussy’s boards are difficult to find as is, much less a clearly marked example of a Russell board. Rarer still is the logo: this is the only example I have seen of a hand-drawn Stussy logo on a Russell board.

According to Russell Surfboards’ website, Stussy, along with Jeff Timpone, handled the bulk of shaping duties for the brand from the mid- to late-1970s. Stussy’s run ostensibly ended in 1980, when he struck out on his own. I was able to find a picture from his Russell days. If you look closely, you can see the Russell Surfboards logo on his t-shirt. 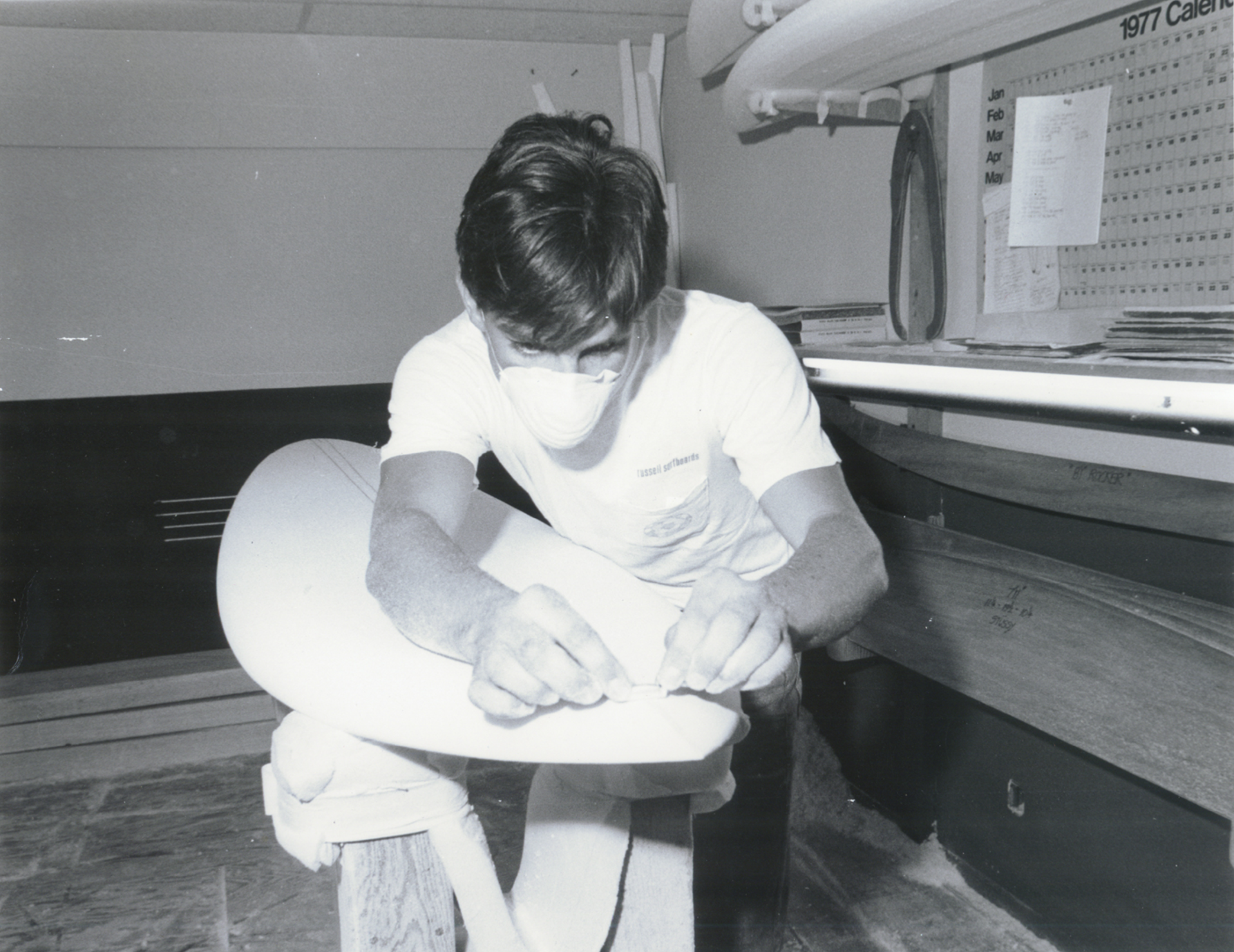 Stussy shaping a board. Note the Russell Surfboards t-shirt. Photographer / source are unknown.

Russell Surfboards has its roots in Newport Beach, where it was founded in 1967. During the seventies the brand was also referred to as “The Brotherhood” in reference to a tight-knit group of locals that surfed Newport’s best breaks. The Brotherhood included surfers like Junior Beck, Lenny Foster, Billy Pells, Paul Heussenstamm, and Jack Briggs. You’ll see The Brotherhood branding on a number of Russell boards from this era: Example of a Russell Surfboards / The Brotherhood logo. Pic via Craigslist

There’s an excellent blog post from a site called The Central Shaft that details one of The Brotherhood’s early trips down to Puerto Escondido during the mid-seventies. There are some incredible pictures of some Newport locals surfing Stussy’s boards in the pounding beachbreak for which Puerto Escondido has become infamous. 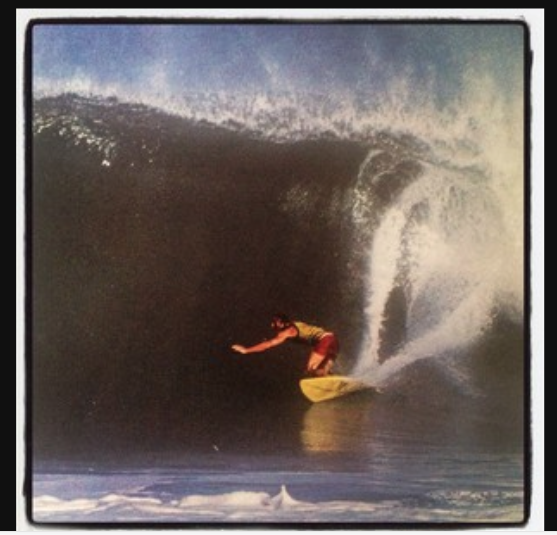 Paul Heussenstamm on a Russell Surfboards Shawn Stussy-shaped sled, about to pull in to a Puerto Escondido cavern. Apparently this was taken from the first published article about Puerto Escondido in Surfing Magazine (Nov 1976, Vol. 12 issue 5). Pic via Tim Bernardy, and taken from the awesome writeup found on The Central Shaft. 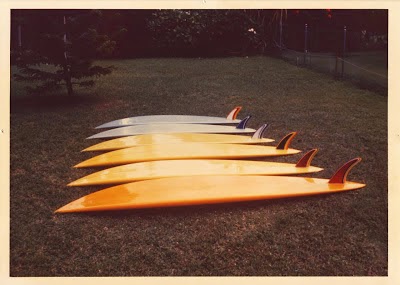 Stussy isn’t the first name that comes to mind when you think seventies single fins, but that is a killer quiver! Love the Rainbow fins, too. Pic via The Central Shaft

In The Central Shaft blog post, Stussy goes on to describe the boards he shaped for the Puerto Escondido trip.

These boards were usually between seven six and eight six, nose and tail blocks from scraps of fin panel that the glass on fin was made from, also the leash mound when that started to happen, yellow tint with full gloss and polish, double and triple touching resin pinlines Russell would lay down, shit was awesome… we were so committed to making what we called “Cadillacs” at the time… a full sixties vibe was alive and well at the brotherhood in that period… love these pictures and this part of my shaping life…

I was also able to find an example of another Russell Surfboards Shawn Stussy creation. This one comes courtesy of Board Collector / Damion Fuller. I have added two of the pictures below. It’s a classic twin fin shape, and according to Damion, the board was shaped in the late 1970s. You can see a Stussy signature on the stringer in the second picture; it’s also signed Greg, and I’m not sure who this is. If you have tips, let me know! The Russell Surfboards Shawn Stussy twin fin also has a Larry Bertlemann-inspired spray job, which is a beautiful touch. See the original post here. Stussy crafted some pretty fantastic twin fins in the eighties under his own brand, and Damion’s site has some great pictures as well.

Sadly, Robert Russell Brown, who founded Russell Surfboard, passed away in 2011. Stussy wrote a tribute to the man on his personal blog. It’s clear that Stussy remains very much influenced by his time at Russell Surfboards.

You can find the Craigslist link to the Russell Surfboards Shawn Stussy shape at the top of the page here. The seller is asking $750. The board needs some repairs, particularly on the bottom, but I don’t think this is an outrageous price. Stussy maybe known for his eighties design, with their bright colors and intricate logos, but the Russell single fin is a rare artifact from his earlier shaping days.

Updated the photo credit for the featured photo, which was taken by Craig Fineman. In addition, the quiver shot was originally credited as having been created for a Brotherhood trip to Puerto Escondido; an article in The Surfer’s Journal claims the quiver was made for a Kauai winter in 1974.