Greetings, Shredderz! As always, here’s a collection of some of the coolest boards I’ve seen floating around online as of late, including an awesome Yater hull.

How cool is this thing?! Yater was the subject of my most recent post, but I might like the board above even more. I can’t be for sure, but it looks to have a bit of a vee bottom. The outline of this Yater hull is very reminiscent of some Liddle and Andreini hulls (specifically, Andreini’s Vaquero model.) The fin — both its rake and its placement — reminds me of Liddle’s boards.

Hull aficionado Kirk Putnam has an excellent pic on his blog that traces the lineage of Andreini and Liddle’s shapes back to George Greenough. I’ve added the picture below. Liddle’s board is at top, and the next two are Andreini Vaqueros. The fourth board from the top is a Surfboards Hawaii vee bottom shaped by John Price, and the board at the bottom is a Midget Farrelly stringerless vee bottom with a Greenough logo. I had been aware of Greenough’s influence on Andreini and Liddle, but had no idea that Yater had tried out some of these shapes as well. Andreini has made no secret of his admiration of Yater, and it’s cool to see a shape that combines the Greenough school of displacement hulls, and Yater’s more traditional side of California board building. If you have pictures of another Yater hull, please drop me a line!

A partial shot of Kirk Putnam’s quiver. Pic via kp’s round up

For more on the subject, I urge you to check out Putnam’s blog. If you’re prone to quiver jealousy, though, his Instagram feed might push you over the edge!

Lopez’s boards for Lightning Bolt are by far the most collectible, but it seems like there’s a growing interest in some of his more obscure shapes. Pictured above is an extra clean example of Lopez’s signature model that he produced for Hansen in the late 1960s. What’s interesting about that board is that it actually featured two different logos. There’s an example of a different Hansen / Lopez board that was recently sold on eBay. It has the alternate logo, which I have reproduced below. Note the different logos in the two Hansen / Lopez boards. The first one says “By Gerry Lopez”, and the second has “Designed By Gerry Lopez.” In addition, you’ll notice the Hansen logos themselves are very different. Pic via eBay

A recently acquired Steve Lis and a Skip Frye from the same time frame. Do great minds think a like? Just received a voice mail from Scotty Brennan who confirms the board was his. This case is solved but Not closed!

Bird Huffman is a San Diego fixture. He runs Bird’s Surf Shed, where he oversees an ungodly stash of vintage boards. Here Bird has come across two awesome early examples of boards from two separate San Diego craftsmen: Skip Frye and Steve Lis. Make sure you click through all the pictures in the gallery above. The Frye is very similar to the Select Surf Shop single fin I posted about recently, down to the glassed on wooden fin. I love the Frye wings logo towards the tail — never seen that placement before. 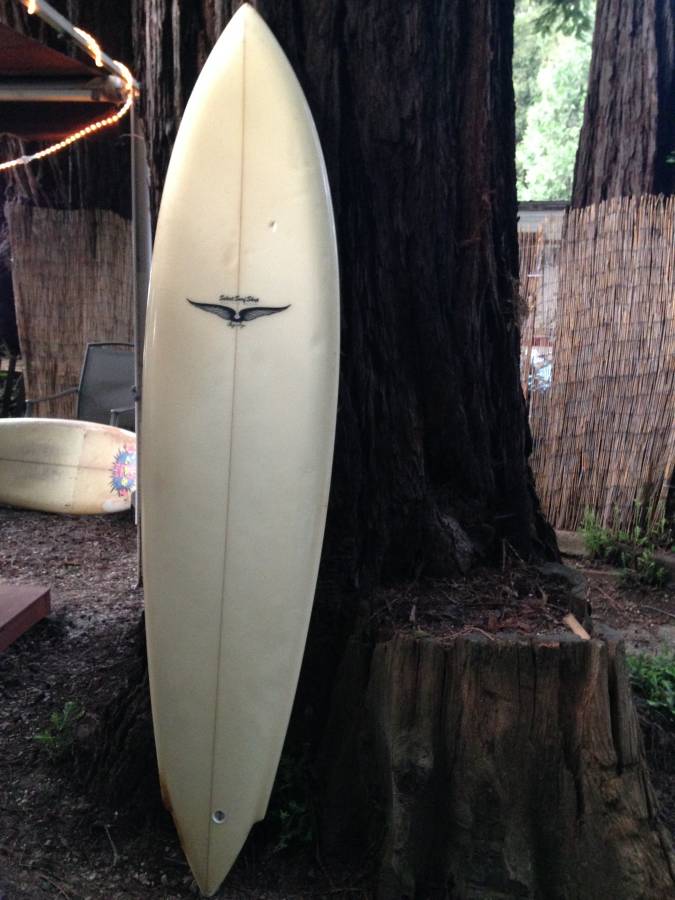 Skip Frye Single Fin with Select Surf Shop laminate. Look at the sharp wings in the tail. Pic via Craigslist

The Lis board is a funky shape, given that it’s a wing pin single fin, and Lis is best known for his fish designs. Make sure you follow Bird on Instagram, as he has been posting updates on the Lis board as he gets them!