Greetings, Shredderz! Hope your respective weekends are all going exactly as planned. See below for your irregularly scheduled dose of social media from the wonderful world of vintage surfboards, including a cool seventies Schroff single fin.

So stoked to pick up a very clean, 1975 "Sting Jet" Wave Tools shaped by Lance Collins. This board is the definition of innovation and creative risk. Check the sliding pics for up close details of the tubes running through the board. Grande Mahalos to the original owner, Maverick, who sold me the board and keeping it stored properly for the past forty-two years. Dims: 6'7", 20 1/4", 3". #thevintagesurfboard #vintagesurfboard #vintagesurfboards #wavetoolssurfboards #newportbeach #echobeach #StingJet #creator #innovator #singlefin #surfhistory

Now THIS is cool! This is a trippy Wave Tools Sting shape combined with some truly out there Jet elements meant to route the water flow. To top it all off, the gradient paint job on the board is beautiful, too. Make sure you scroll through all the pictures in the gallery above — this is a must-see. Congrats to @thevintagesurfboard for scoring such a rare and interesting gem.

Hope you’re not sick of me mentioning Bird and his eponymous Surf Shed yet, because I’m not stopping any time soon! Anyway, Bird has a few more recent Dick Brewer boards for sale. They’re not cheap, but quality never is. These boards aren’t technically vintage, considering they were built in 2001-2002, but they are beautiful nonetheless. I love the Surfboards Hawaii logos towards the tail, too. The Brewer boards are also a nice modern complement to this week’s earlier post about Terry Fitzgerald and Dick Brewer. Note that all three boards above were all glassed by Jack Reeves, too.

I’m not sure who Hemisphere Cargo is, but if he doesn’t work for Schroff, at the very least he has a fine appreciation for Pimp’s shapes! Everyone goes crazy over the Echo Beach Schroff thrusters with the checkerboard logos, and rightfully so, but I’m really digging this Schroff single fin. Relatively speaking, it looks a little restrained when compared to Schroff’s more out there looks, and I’m into it!

Just delivered the goods down to SHACC. It's going to be a great show! "Harbour Surfboards A Retrospective" at the Surfing Heritage & Culture Center Opening June 24th 6-9pm #HarbourSurfboards #Since1959

If you’re not familiar with Rich Harbour and his legacy, I have one small request for you: close this window immediately, read up on the man, and then beg the surf gods for forgiveness over the fact you were reading Shred Sledz instead of learning some history.

Actually, you can do one better, as the Surfing Heritage and Culture Center, located in San Clemente, CA, is currently exhibiting a retrospective on Harbour’s career. The exhibit opened yesterday and it will be going on for three months. Harbour is a legendary California shaper, and it’s rad to see him get some shine courtesy of the awesome SHACC. 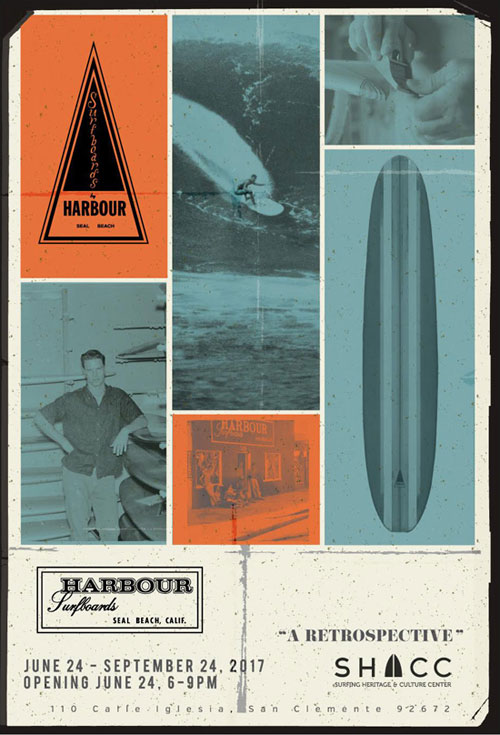 How cool is this board. This is a very early 1970's vintage surfboard shaped by Master Dick Brewer. Super important piece for a few reasons. 1) there is only about 12 boards shaped by Brewer under the Greek surfboards label. 2) it was shaped for Sammy Hawk. Part of the #luisrealcollection

Luis Real has a truly staggering collection of vintage surfboards, and he frequently posts about them on Instagram. Pictured here is a rare bit of Dick Brewer trivia — one of the few boards Brewer shaped under the Greek label.