The Sultan in Hawaii: Terry Fitzgerald for Dick Brewer 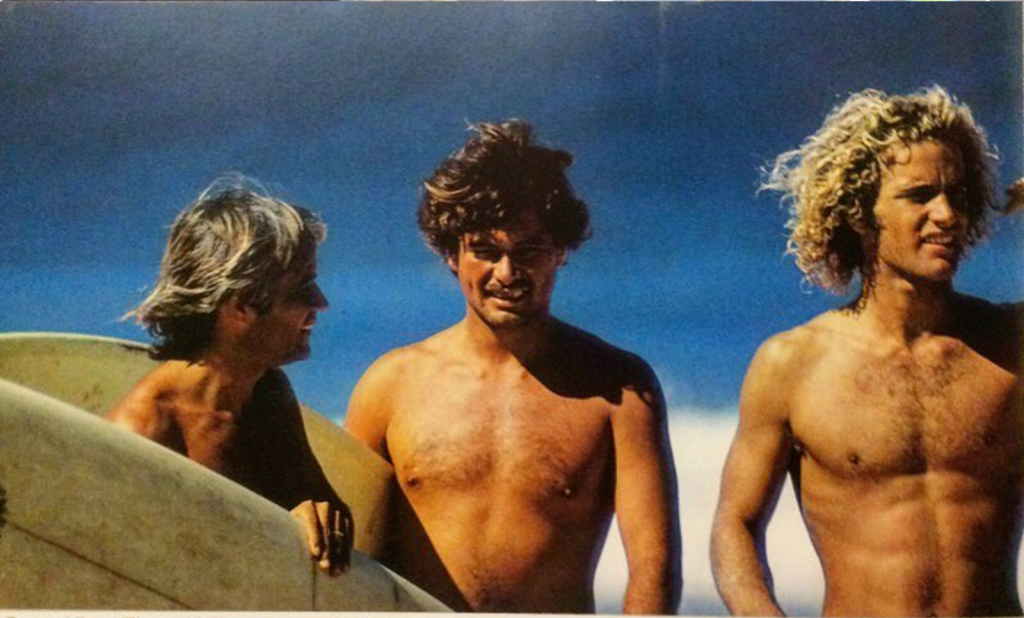 How to describe the North Shore of Oahu, the famed strip of surf breaks that, at the start of every winter, becomes the beating heart of the entire surf world? Volcom dubbed the most famous piece of real estate in surfing “The Proving Grounds”, and while surfwear marketing is rarely inspired, this is a fitting name. Surfers have long made pilgrimages to the North Shore, and Aussie Terry Fitzgerald, AKA The Sultan of Speed, is no exception. Sam Hawk (left) and Terry Fitzgerald, preparing to paddle out at Rocky Point in 1976. Hawk was a Brewer team rider and respected shaper in his own right. Photo by Jeff Divine

Fitzgerald’s first exposure to Hawaiian influence came during the world contest in 1970, held at Bells Beach. The Australians — Fitzgerald included — were riding equipment that was inferior to those of their Hawaiian counterparts. According to Fitzgerald, at the time of the contest he wasn’t particularly well-liked by his Australian peers. As a result, Fitzgerald ended up rooming in a hotel with Hawaiian surfers Ben Aipa and Paul Strauch. The experience left a lasting impression. “I got a whole new perspective out of that contest, and I connected with the network that was to become the foundation of my surfing life. …I was put in with Aipa and Strauch, and my mind was opened to the whole Hawaiian deal.”

The quote above can be found in “Accelerator”, an excellent Fitzgerald profile written by Phil Jarratt and published in The Surfer’s Journal. I cannot recommend the article enough; you can find a link to it here (article is free for TSJ subscribers, or $3.99 to download.) 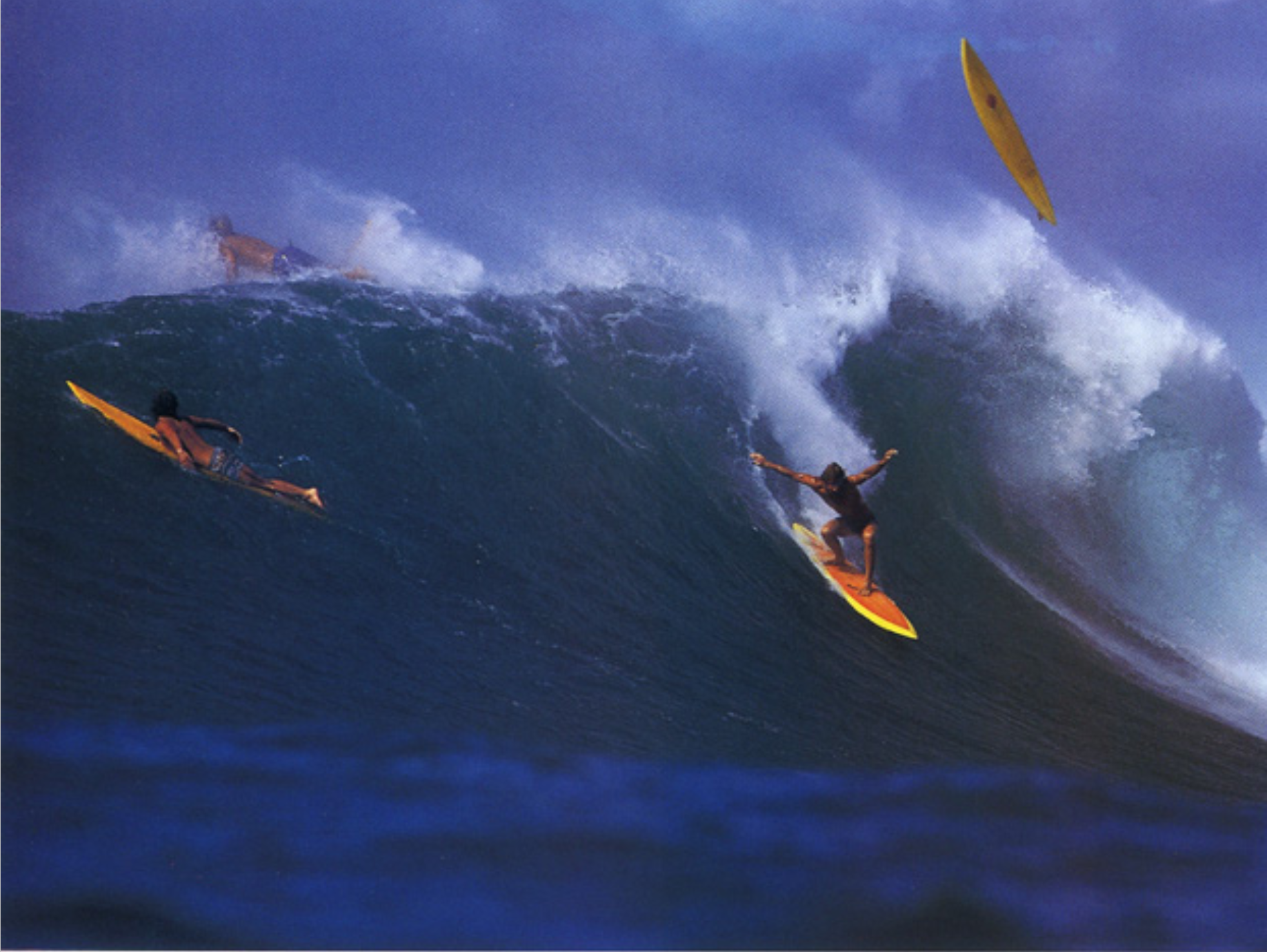 Fitzgerald made his first trip to Hawaii in the spring of 1971. In Hawaii Fitzgerald met none other than Dick Brewer, one of the statesmen of Hawaiian surfing. “Accelerator” has a number of excellent details on how the two shapers’ partnership began to emerge. Brewer witnessed Fitzgerald surfing Rocky Rights and dubbed the young Australian the best surfer in the world. In the summer of that same year, Fitzgerald followed Brewer back to Kauai, where the two began to exchange ideas on surfboard design. Fitzgerald credits Brewer’s influence, but disputes the notion that he left Hawaii intent on aping Brewer.

“The boards I took to Hawaii in 1971 were very much Terry Fitzgerald creations. They were the boards that created my reputation, and they were made before I met Brewer. Basically, I’d taken the twin fin that Greg Hodges and I made, put a single fin on it and refined it along the lines of the boards that Russell Hughes and Dana Nicely were doing at Byron Bay. Dick’s genius was that he could look at what a TF or a Sam Hawk was doing and subtly integrate that into his own designs. He could pull together influences from a whole range of people in a way that worked. …By the end of 1971, I was in California making a real statement in foam, and I know I couldn’t have done that without the Brewer experience.”

Shortly after returning to his native Australia, Fitzgerald opened up his own shop and began selling his shapes under the Hot Buttered label. Even the name Hot Buttered has its origins in Fitzgerald’s Hawaii experiences: during the winter of 1971, Fitzgerald and Hawaiian surfer Owl Chapman had been listening to Isaac Hayes’ album “Hot Buttered Soul”, and the name stuck. 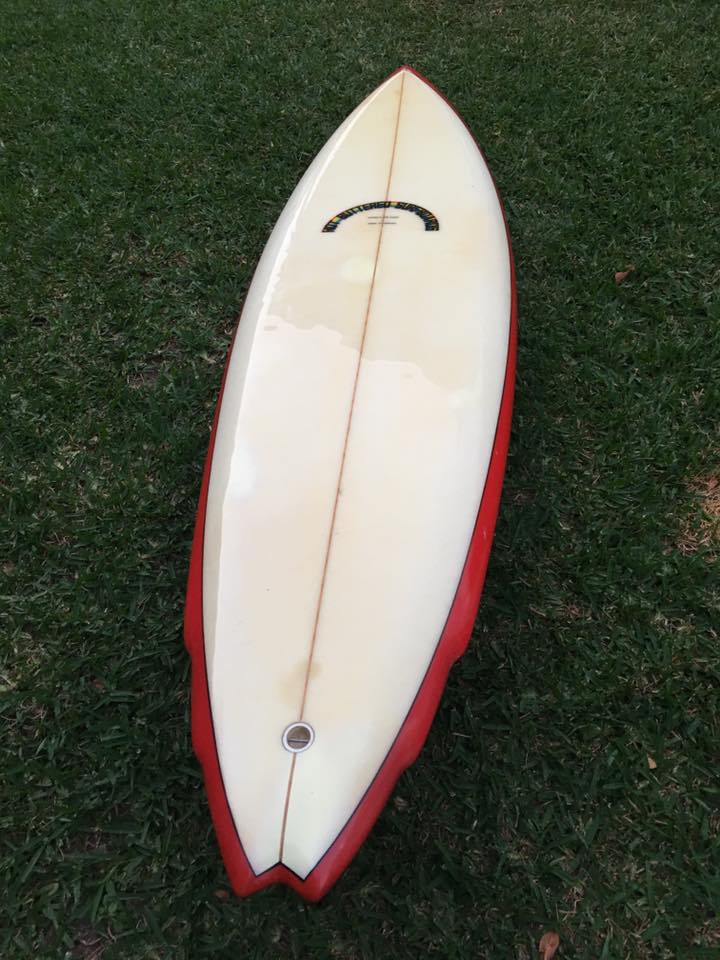 The board pictured above is an incredible piece of surfing history that serves as a document for the cultural exchange between TF and Dick Brewer. It is a Hot Buttered single fin, shaped in either 1975 or 1976, that Terry Fitzgerald made for Dick Brewer. The board belongs to Mark Loh of Beach Beat, who kindly contributed the photos to this post.

The winged pintail setup is a hallmark of Fitzgerald’s designs from the Seventies. The board above measures in at 6’5″, and it is a single fin. According to Loh, the board has had some small repairs, but otherwise completely original. The board is in excellent shape considering its age, not to mention that swallowtails and wings are notoriously prone to damage.

You can see Fitzgerald’s signature on the board. It clearly reads “T.F. Hawaii for Dick 6’5”. However, the board’s owner went one step further, and contacted Fitzgerald directly. Fitzgerald was able to issue a certificate of authenticity and provide some more details on the board itself. 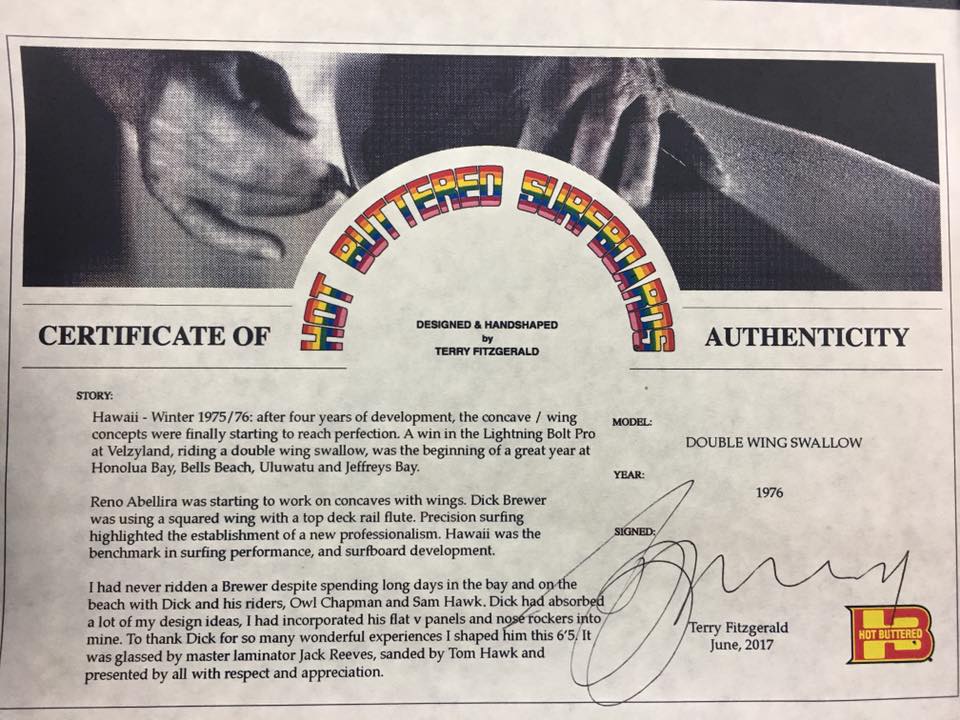 Fitzgerald provides great insight on the various elements that went into the board’s design. It’s amazing to hear that despite the time spent together, Fitzgerald had never actually ridden one of Brewer’s boards! Finally, Fitzgerald notes the board was glassed by Jack Reeves and sanded by Tom Hawk (brother of the aforementioned Chris). 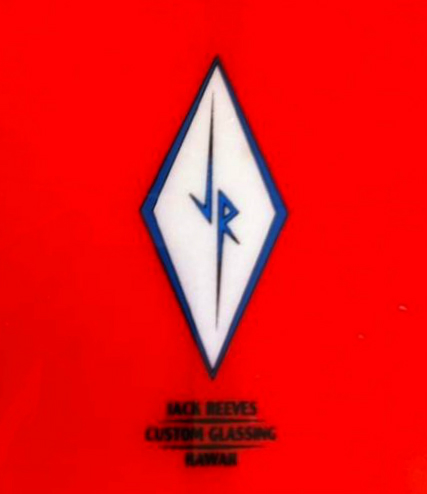 Jack Reeves logo taken from a different Owl Chapman surfboard. I love the simplicity and clean lines of this logo. Pic via The Surfboard Project

This is an amazing board, and Fitzgerald’s certificate is a wonderful source for some first-hand information. Finally, check out the original post featuring the board on Vintage Surfboard Collectors (Facebook). As you can see, I’m not the only person who was stoked about this find!

Thanks to Mark Loh for sharing the pictures and the story.