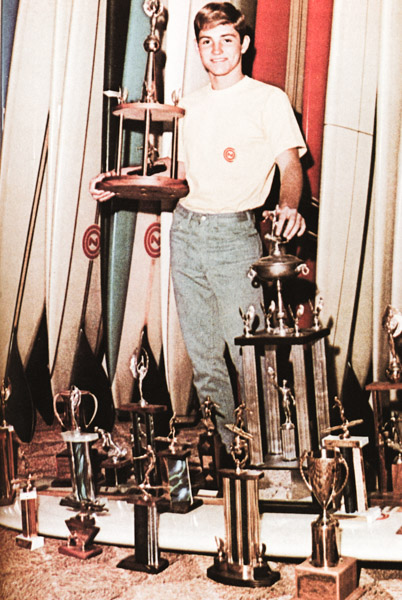 Greetings, Shredderz! Today’s Deep Dive focuses on perhaps my favorite old-school surfboard brand ever: Con Surfboards. I’ve said it before, but it bears repeating: the Con Surfboards logo is a gorgeous piece of graphic design. It’s classy and timeless, with just the right amount of color to make it pop. Today’s post examines a model that is near and dear to my own East Coast roots: the Con Surfboards CC Rider. The CC Rider is named after famed East Coast surfer Claude Codgen. Before one Robert Kelly Slater came along, Codgen was Cocoa Beach’s most famous surfing export who became a well-known pro in the 1960s. In 1966, Codgen had the honor of representing the East Coast at the World Surfing Championship held in San Diego. That same year, Codgen joined forces with Con Surfboards, which released his signature CC Rider model. 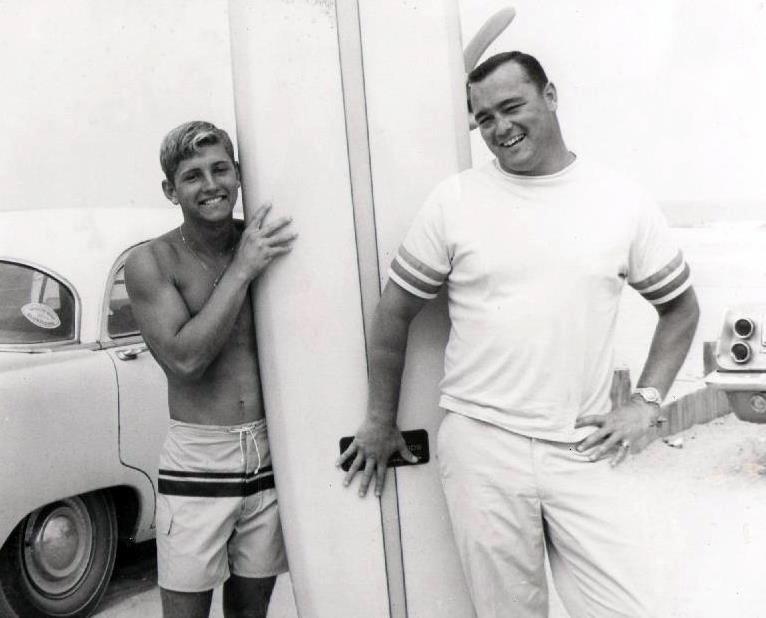 A young Claude Codgen on left, Greg “Da Bull” Noll on the right. Looks like Codgen is holding a Con Surfboards CC Rider model, but Da Bull’s hand is in the way! Pic taken by Roger Scruggs, via East Coast Surfing Hall of Fame

Despite Con Surfboards’ status as a cult classic brand, and Codgen’s legacy as one of the first true East Coast pros, there isn’t a whole lot of information online about the Con Surfboards CC Rider model. This post is an attempt to explore the history of the CC Rider, and present pictures of the various iterations of Claude Codgen’s signature model. This post is by no means definitive, as I have done my best to cobble together the various bits of information available online. As always, if anyone has any better info on the Con Surfboards CC Rider, do not hesitate to drop me a line.

The CC Rider was produced starting in 1966. I believe it was only produced for a handful of years, as Stoked-n-Board indicates that Sunshine Surfboards, Codgen’s own brand, was founded in 1970. Sunshine continues to produce the CC Rider model, and Codgen is still shaping today.

This is an example of the later Sunshine Surfboards CC Rider (here referred to as the “Claude Codgen Model.”)

According to a thread on Swaylocks, Bill Shrosbree was one of the early shapers responsible for making many of the early Con Surfboards CC Rider boards. I’m not sure whether or not this is true. Even though Codgen now shapes boards under the Sunshine label, I am under the impression that he was not responsible for shaping the various CC Rider models.

See below for an example of what I believe to be the most basic version of the Con Surfboards CC Rider. These pictures are via a Craigslist listing for a board from a few months ago.

Note the telltale black label on the board’s deck. Here’s another picture of a similar board, via the Long Island Surfing Museum, featuring Charlie Bunger’s personal collection of 1960s Con Surfboards. The board on the far right looks almost identical to the one posted above: same black label on the deck, and then the tapered yellow high-density foam stringer. 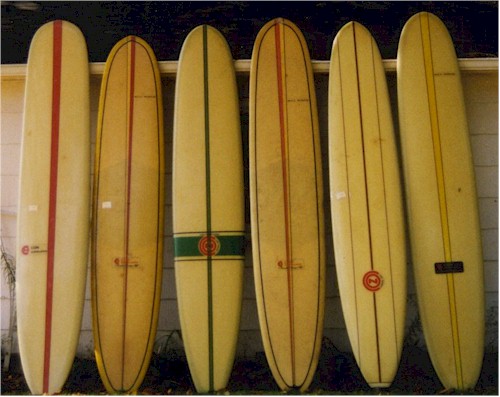 The CC Rider model can be seen at the far right. Note the “CC Rider” lam at the top right and the black laminate towards the tail. I believe the boards that are second from left and fourth from left are CC Rider pintail models. Pic via Long Island Surfing Museum.

The main distinction between the standard CC Rider and the Lightweight variant is unclear, other than the different text that appears on the laminates. In other words, I believe the CC Rider Lightweight model has a “Lightweight Model” added to the logo, which you can see in the first picture. I imagine the construction of the board was likely changed as well, but I can’t say for sure. Otherwise, the high-density foam stringer looks the same as the standard CC Rider, and the board appears to have the same volan patch as seen in the example in the ad above. Pics via an old Craigslist posting.

Vee bottom boards were very popular in the late 1960s, and to my surprise, I learned that Con Surfboards produced one as well. I love the branding of this board, including the hand flashing the peace sign in the ad above. The only example I have found of a CC Rider V-Wedge Bottom comes via ChubbySurf.com and their Pinterest account. This is a pretty rare variant, and I have yet to see one up for sale. Check out the neat rainbow CC Rider logo on the bottom. No dimensions were listed. 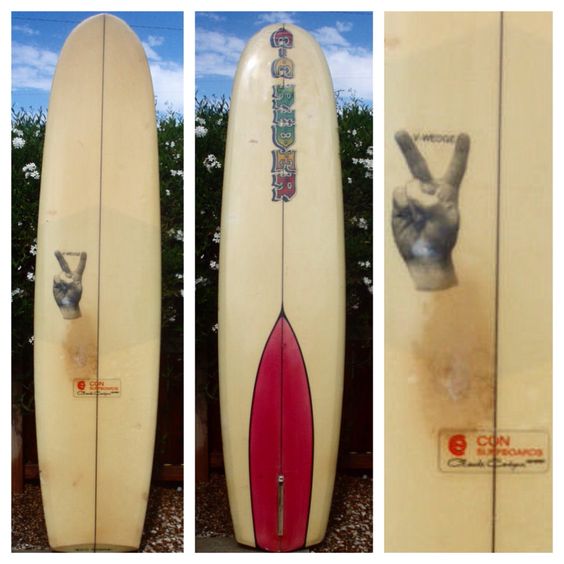 I have been able to find two versions of what I believe are CC Pintails, but there are a few details worth noting. First, neither of these boards bears a straight up “CC Pintail” laminate. The laminates on both boards read “CC Rider Lightweight.” I consider both of these boards CC Pintails, however, because their silhouettes are identical to the “CC Pintail” pictured in the ad above.

First is an CC Pintail Lightweight that was recently listed for sale on Craigslist in Los Angeles. This board is a trip, starting with the two-tone high-density tapered stringer. The board was listed at 9’10”, and according to the seller, it’s circa 1968.

Island Trader Surf Shop is a rad Florida-based shop that features a great collection of vintage boards. They have an example of another Con Surfboards CC Rider Pintail Lightweight, and you can find it here. I have reproduced some of the pics below. It also has the same two-tone high-density stringer, black pinline design, and logo placement. In addition to boasting an elaborate fabric inlay, the Island Trader board is considerably shorter than the orange board, measuring in at only 8’6″.

Finally, Con Surfboards also produced as CC Rider Minipin. This variant does not appear in the ad above, alongside the Lightweight, the V-Wedge Bottom, and the Pintail. I am guessing it is a later board — late 1960s? –but I’m not certain. There are three examples I have seen, the first being a 7’6″ CC Minipin Lightweight with a blue (probably re-done) bottom. This board was posted for sale on eBay a little while ago. According to the original listing, the board was produced in 1969, supporting the theory that this is a later-era CC Rider model. It certainly has the funky outline of a Transition Era board from the late 1960s, with the wide point pushed pretty far back towards the tail.

There’s another CC Minipin Lightweight that is currently for sale on eBay. You can find a link to the board here. This one measures in at 8’6″, a full foot longer than the blue bottom example above. There’s also a small difference in laminates: this board has one logo reading “CC Minipin Lightweight”, whereas the blue bottom board has its CC Minipin and Lightweight laminates located on separate parts of the board. The example below also has a bitchin’ Con Surfboards logo on the bottom near the nose (see last photo). Pics below via the eBay listing.

Finally, there is another Swaylocks thread with an extremely clean example of a CC Minipin, complete with its original fin. I have reproduced the pictures below. In the thread, well-regarded shaper Bill Thrailkill weighs in on the board. He identifies the fin as being a rare first generation Fins Unlimited fin, and based on this, he estimates the CC Minipin below was likely shaped in late 1967 or 1968.

Those are all the examples of Con Surfboards CC Rider models that I have been able to find. Drop Claude Codgen a line at the Sunshine Surfboards Facebook Page; it seems like he is still stoked on surfing and shaping a good half century after his signature model was released!