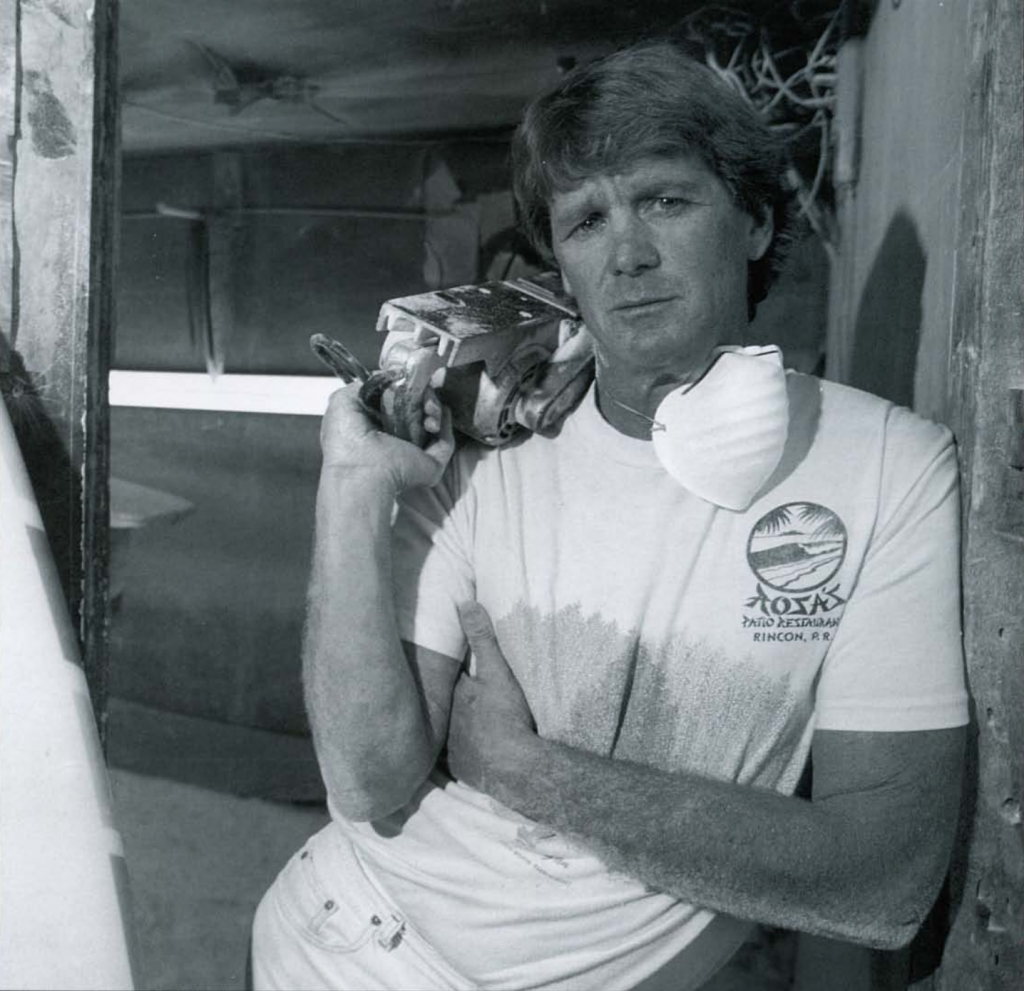 Shred Sledz may have a silly name, but we’d like to think we’re (somewhat) serious about making an effort to help preserve surf culture. Then again, the blog’s name does have an ironic ‘z’ in it, so who can be sure? One thing is certain, though: Shred Sledz has a keen interest in examining lesser-known chapters of California’s rich surfing history, and in particular, the craftsmen who have helped make it all possible. One such underground shaper is Creative Freedom’s John Bradbury. Bradbury might not be a household name, partly due to his untimely passing in 1999. Nonetheless, Bradbury is still respected by some of the most famous board builders in the world. Among others, shapers like Al Merrick, Renny Yater, Marc Andreini, Wayne Rich and Bruce Fowler have all expressed admiration for Bradbury and his designs.

Bradbury was an early proponent of EPS / epoxy surfboards. In 1985 Pottz won a World Tour contest on a Bradbury design. The success of this collaboration led to Bradbury supplying boards to other top pros Cheyne Horan and Brad Gerlach. 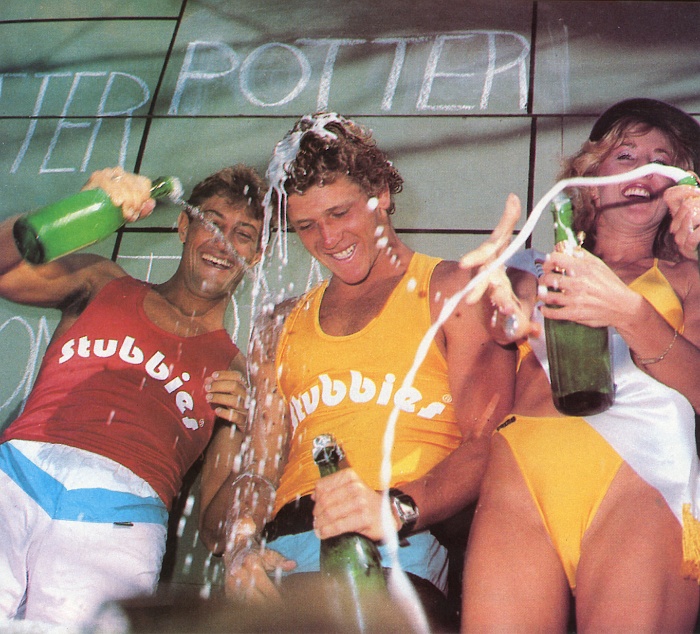 No Bradbury board here; just Martin Potter (center) celebrating a win at the 1983 Stubbies Surf Classic. You can see Shaun Tomson on his left. Pottz would surf a Bradbury epoxy design in a contest two years later and win, helping cement Bradbury’s status as a forward thinking shaper. Pic via Area561 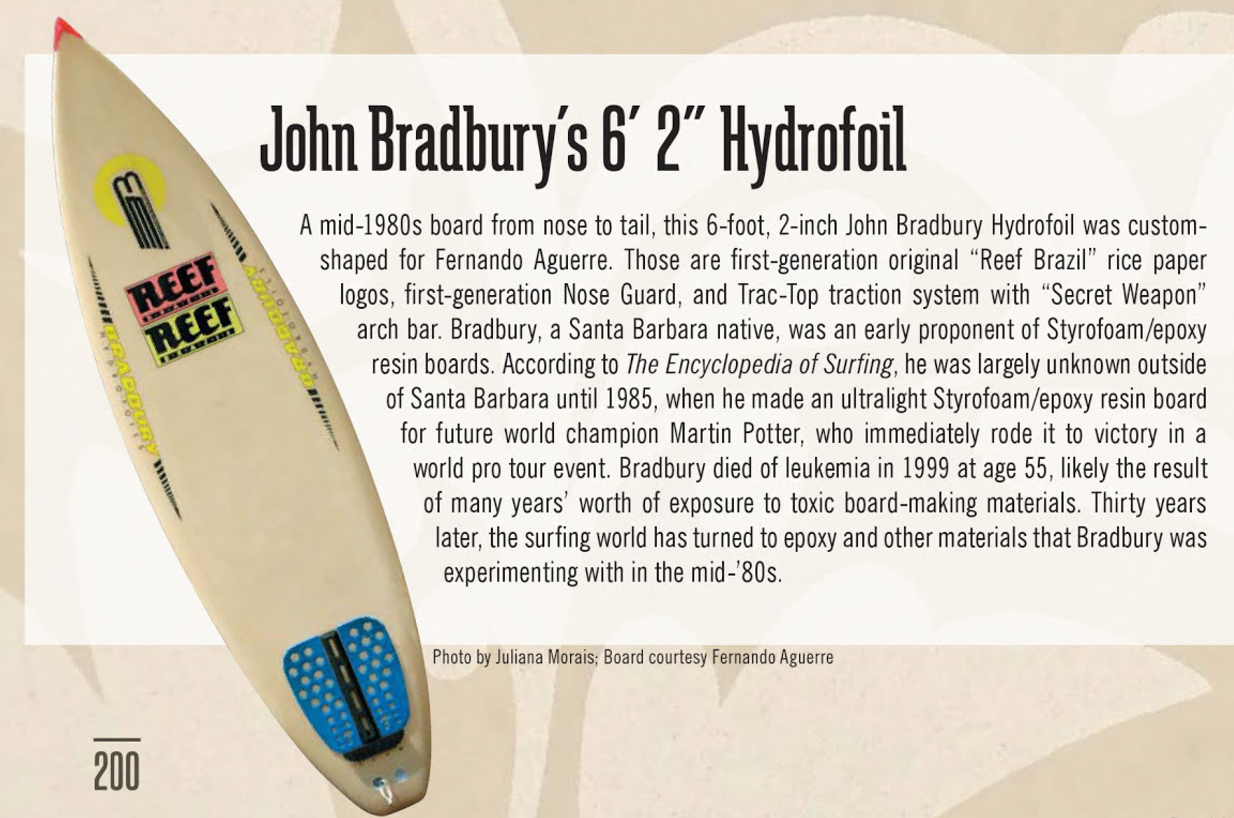 Here’s an example of an early Bradbury epoxy board, made for Reef founder and surfboard collector extraordinaire Fernando Aguerre. Note the lack of a stringer. In addition, you can see there is no “Creative Freedom” branding anywhere — by the mid-1980s it appears Bradbury was shaping boards under his own name. Pic via 365 Surfboards

While Bradbury is rightfully known for his early forays into epoxy surfboards, this post will focus on the boards he made during the earlier parts of his career. The pictures of the boards in the post below came from a Shred Sledz reader who has been quietly collecting Bradbury’s designs over the years. (Side note: If you have any interesting boards or stories you’d like to share, don’t hesitate to reach out!)

Twice as nice: an early Creative Freedom John Bradbury logo. Stoked-n-Board lists this logo as having been produced during the 1960s; I’m not certain that’s the case. More on this below.

It’s unclear when this board was shaped. My guess is sometime during the 70s. The fin box looks like a Bahne Fins Unlimited box, which I believe were not popularized until the late 1960s. In addition, the outline looks similar to many of the single fin guns and mini-guns being made during this era. This logo was created by Michael Drury, who also did the updated version (see below).

Stoked-n-Board continues to be one of the finest online resources on vintage surfboards. Predictably, S-n-B’s entry on Creative Freedom / John Bradbury is worth a read. However, after discussing the boards in this post with their owner, I’m not sure that the dates corresponding to the logos in S-n-B’s entry are correct. See below for an example of a Creative Freedom surfboard with a “compass logo”. Despite what is listed on Stoked-n-Board, the compass logo was actually the first logo ever designed for Creative Freedom. The board below is also numbered #199, which pegs it as a pretty early shape. 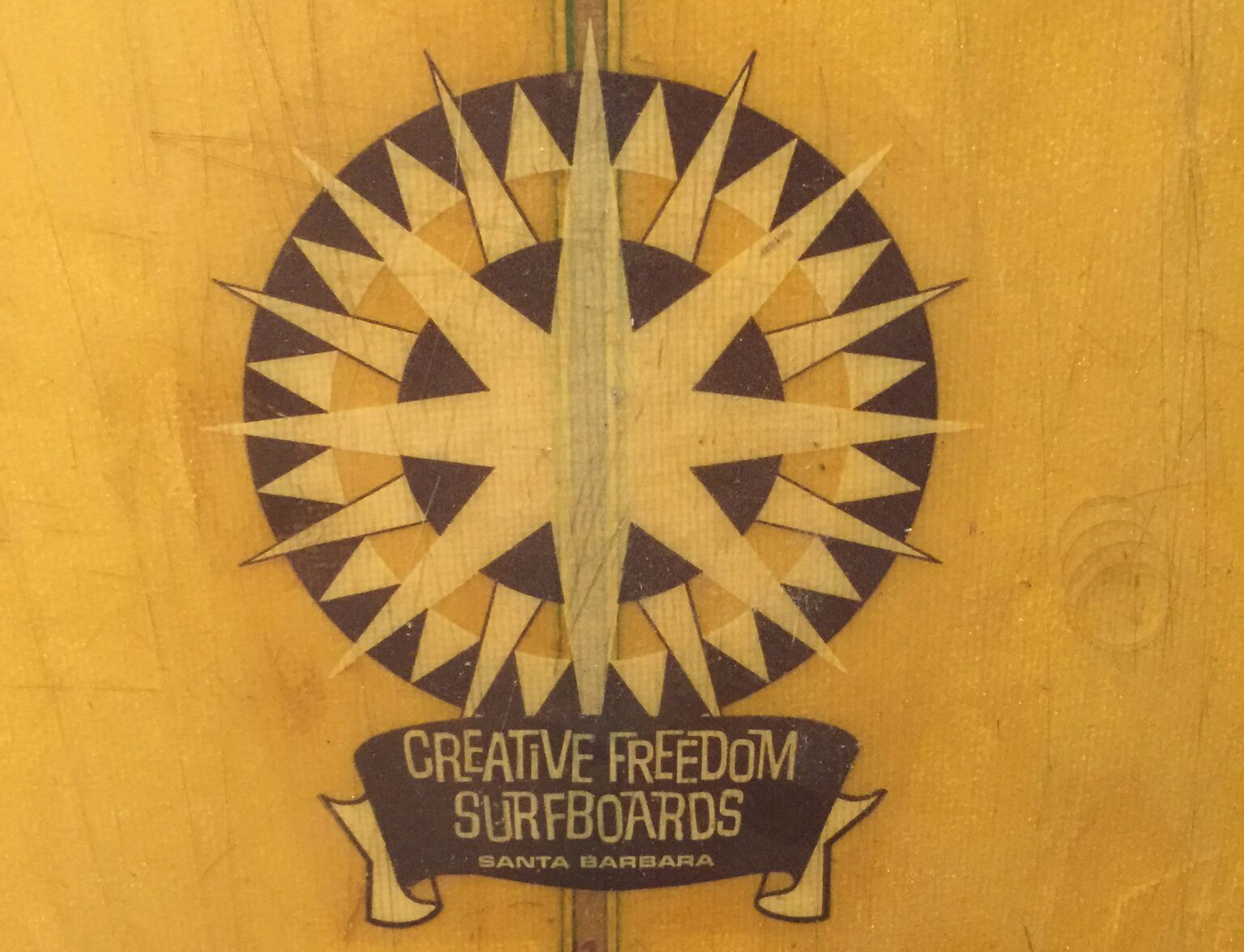 Example of the “nautical logo.” The owner of this board believes this may have been the first-ever Creative Freedom logo. This board is also numbered #199, which would make it an earlier shape.

See below for more pictures of the board in question. Note the prominent S-Deck with the domed tail.

The tail in particular is pretty funky looking, as you can see in the pictures: 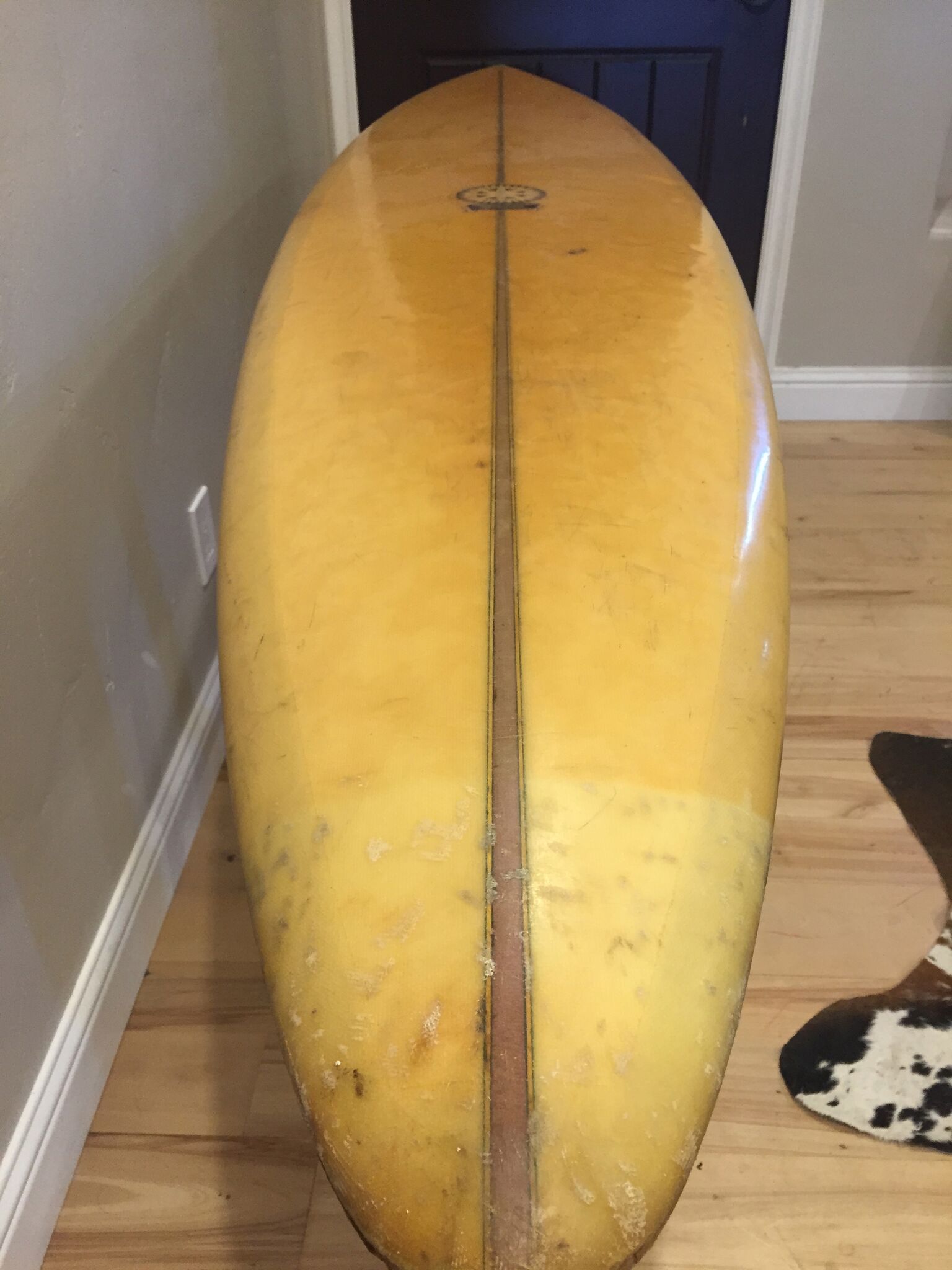 And here’s a side shot, which gives you a clear idea of the S-Deck and the rocker.

Look at the dramatic S-Deck and the low rocker in the nose.

Fountain of Youth Surfboards shaper Bruce Fowler graciously took some time to read this blog post and offer some additional information on the board above. There is no tail rocker present in the Compass Logo board, which was likely shaped in 1969. According to Fowler, the more modern designs of shapers like Dick Brewer, Mike Diffenderfer, and Mike Hynson forced the Santa Barbara crew to adapt. Brewer, Diff, and Hynson’s boards featured beak noses, full down rails, and natural rocker in the tail. These advancements were later incorporated into Bradbury, Yater, et al’s designs.

There’s one other data point that supports the 1969 date for the compass logo board, and it comes from Kirk Putnam. Putnam posted a picture of a very similar looking compass logo Creative Freedom board, which Putnam dates to 1969 as well:

At some point Bradbury tweaked his logo to include two surfers on the wave (maybe as a more accurate depiction of the crowds at Rincon?) The same collector owns a single fin sporting the two surfers logo. 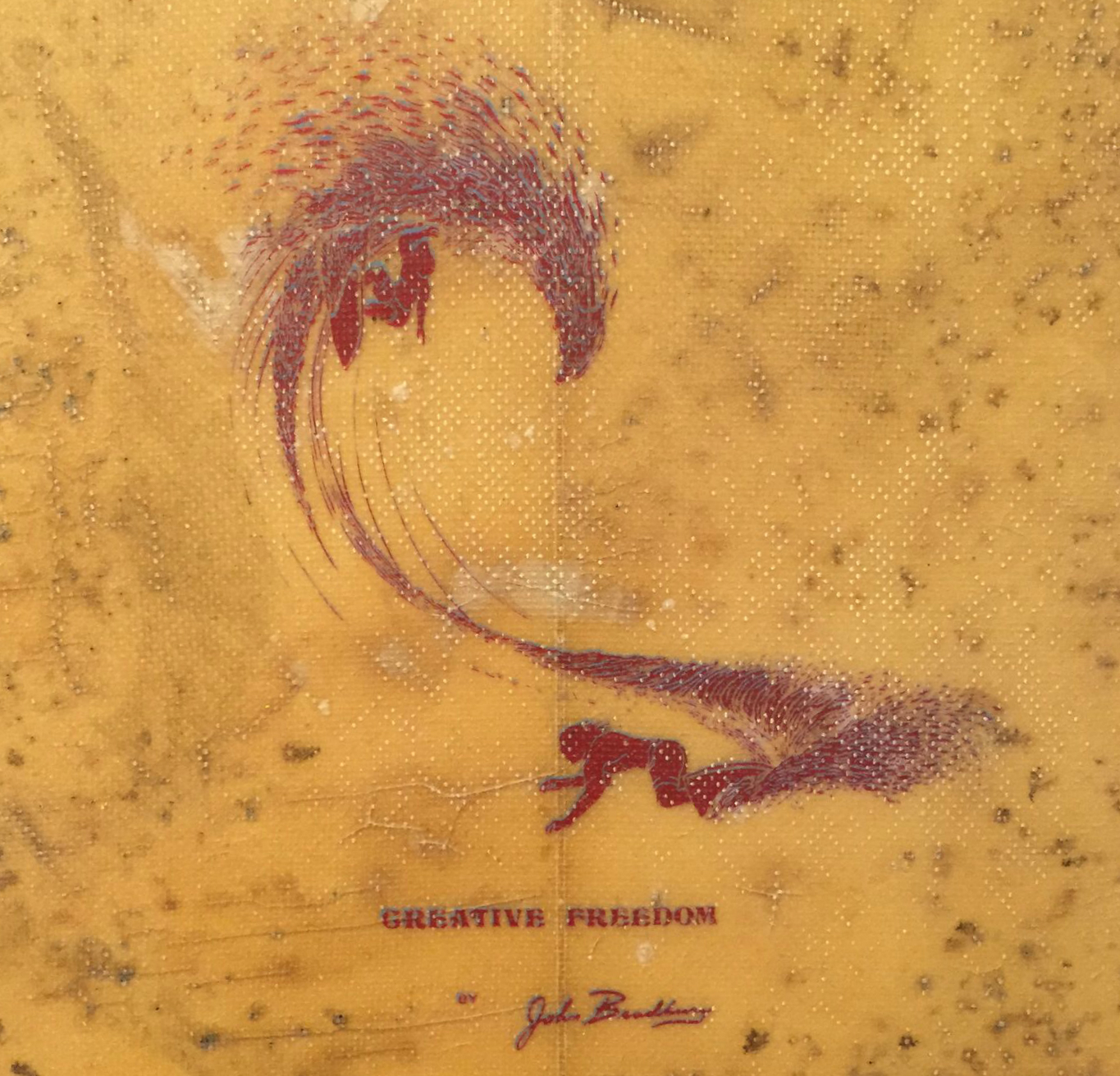 There’s now another surfer on the wave. Note the signature that has been added to the bottom as well.

I believe the logo with the two surfers is more recent than both the single surfer logo, as well as the nautical logo. The board bears many of the hallmarks of a traditional 1970s single fin. It has a beaked nose, a removable fin box, and beefy rails (3-1/4″!).

The 70s single fin also has a Bradbury signature on the board, addressed to Lewis. You can barely make out the “J. Bradbury” below. 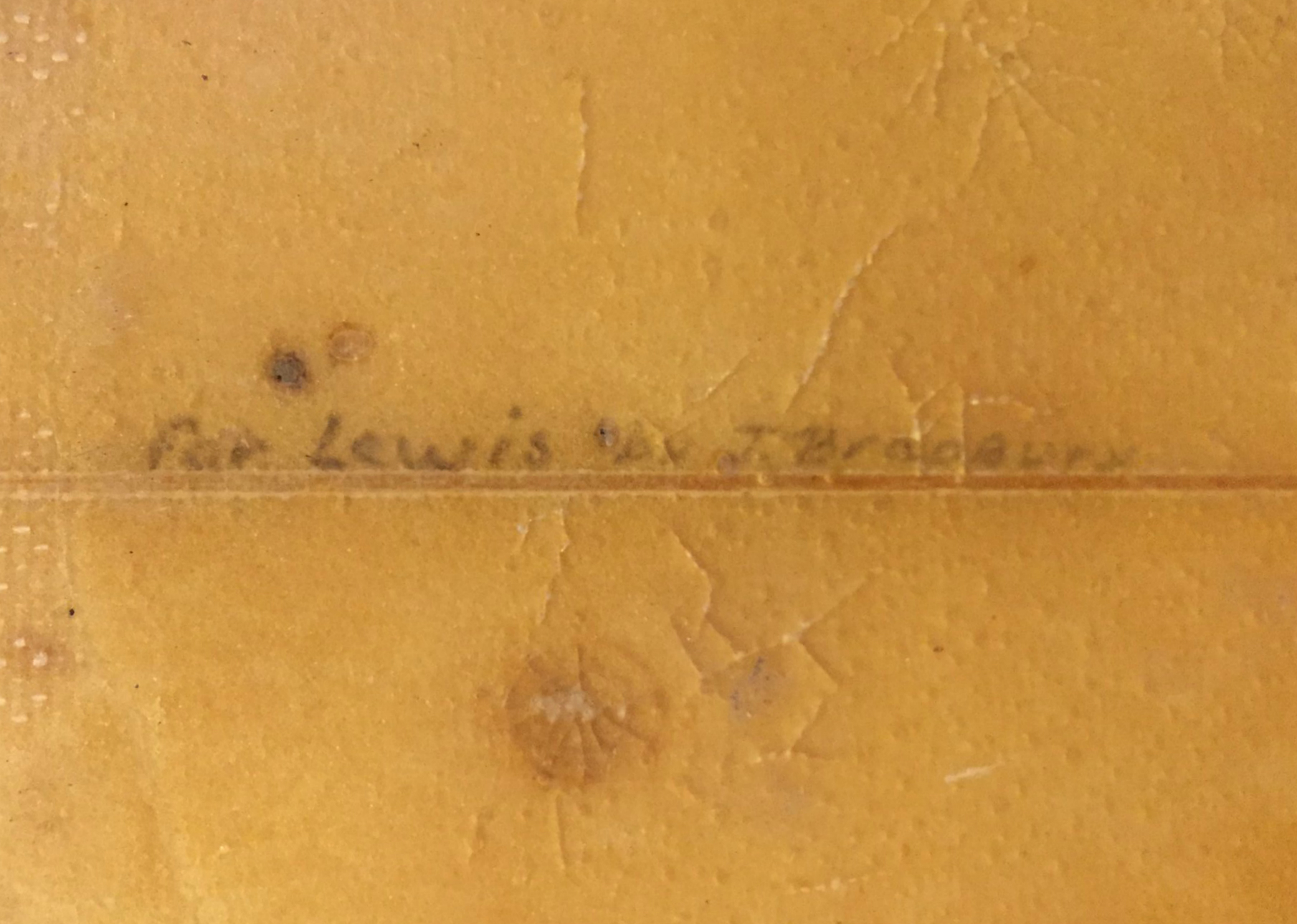 Example of a Creative Freedom surfboard with a John Bradbury signature on the stringer.

At some point, Bradbury appears to have ditched the Creative Freedom brand altogether. Stoked-n-Board estimates the switch happened in the 1980s, and Bradbury continued to use the new logo until his passing in 1999. Here is an example of the modern Bradbury logo, taken from a board that was listed for sale on Craigslist a few months ago: 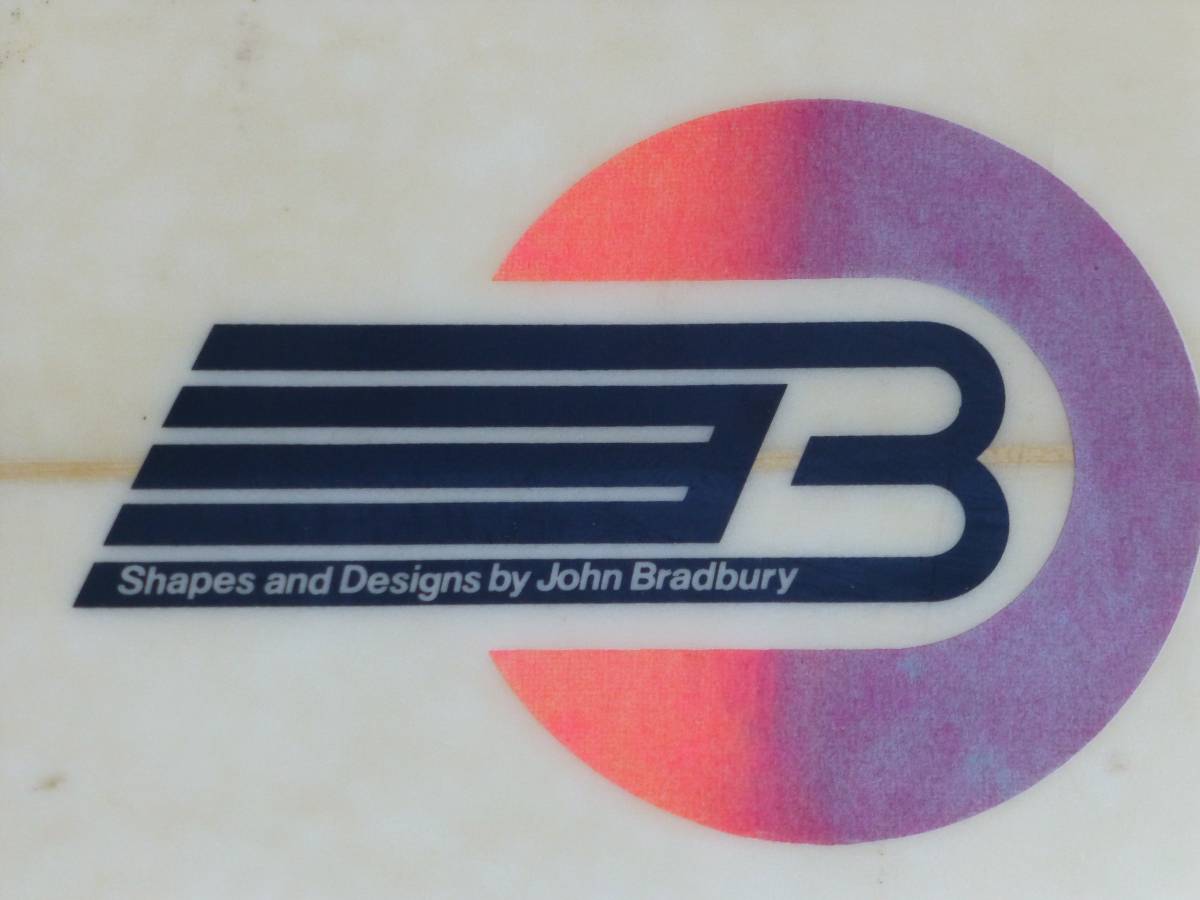 Clean and colorful example of the modern logo that John Bradbury used from the 1980s until his passing. 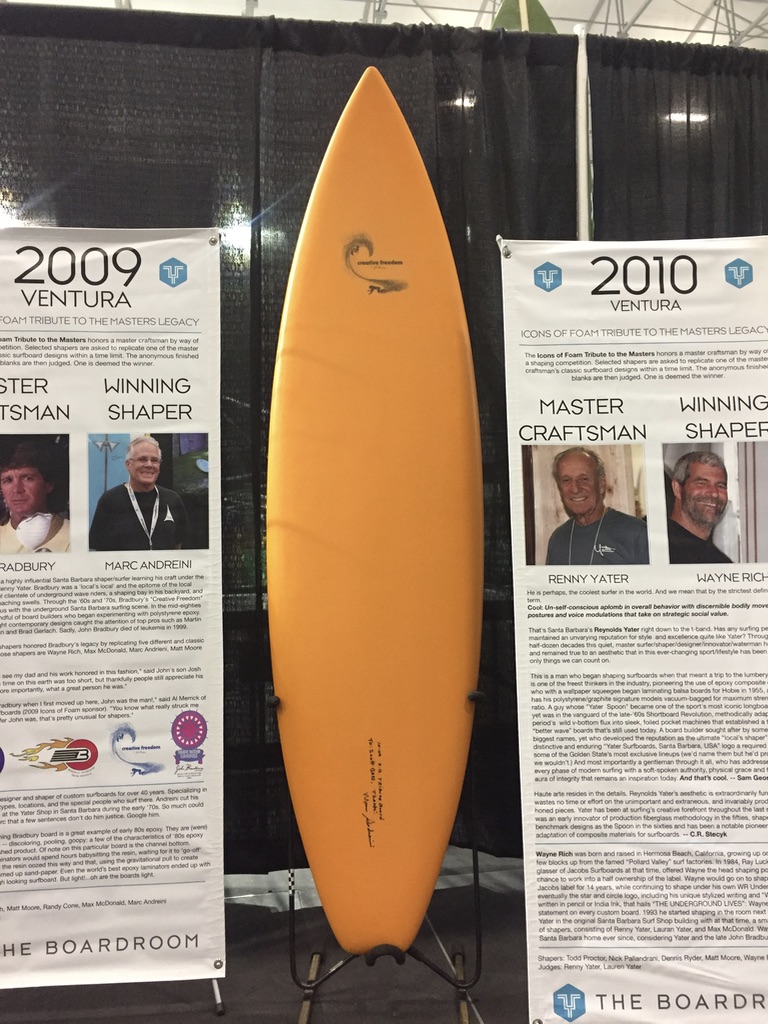 Creative Freedom John Bradbury shapes continue to have a cult following, particularly in and around Bradbury’s hometown of Santa Barbara. While Bradbury’s career as a shaper might have been cut short by his untimely passing, there is no doubt about the extent of his contributions to the sport of surfing.

Many thanks to Jesse McNamara for much of the information in this post!

Photo at the top of the page taken by Matt George; via The Surfer’s Journal

Update 7/24: Post updated to include date on the compass logo board, and additional information regarding its shape. Michael Drury also credited with designing the surfer logo.