Greetings, Shredderz! I hope this post finds you all well. Today’s post features a surfboard I have long been fascinated with: the Harbour Spherical Revolver. The Spherical Revolver was invented in 1969, according to Harbour’s website. Harbour continues to produce the board today, at lengths ranging from 6’10” to 8″. While the Spherical Revolver has been updated since its genesis in the Transition Era, the board’s MO remains the same: it is intended as a shorter board for longboarders who still want paddling power, but are looking for something a little more maneuverable.

Rich Harbour is California surf royalty, and his vintage boards are very collectible. As is far too frequent when it comes to surfboards, though, it can be hard to find concrete information on prices and history. Even Harbour’s website doesn’t have any details on the history of the Spherical Revolver, other than its creation date. Stoked-n-Board, shockingly, doesn’t even mention the model by name. As you can see in the advertisement above, the Spherical Revolver was based off an experimental design that was made in collaboration with Mark Martinson. (Side note: Harbour Surfboards has a webpage dedicated to their old ads and it is a must-visit.) Martinson was an early pro who won a bunch of surf contests in the 1960s, and was part of the Harbour Surfboards stable. Martinson continues to shape for Firewire Surfboards today, after stints working as both a commercial fisherman and then shaping for Robert August’s label.

Unfortunately, that is where the trail goes cold. I have no clear information on when the Spherical Revolver was produced, and what specific changes were made to the board between its introduction and its current iteration. It’s a shame, as while many Transition Era boards are derided as being impractical and tough to actually surf, the Spherical Revolver endures today. If you have more info, please drop me a line!

It’s not all bad news, though, as you can still find Spherical Revolvers that pop up for sale on Craigslist and eBay these days. There’s currently one up for grabs in San Diego, California on Cragislist. You can find a link to the board here. Pics below via the Craigslist posting.

The board is 8’1″ and the asking price is $650. I’m reluctant to weigh in on the price, as I have been unable to find any comparisons from boards sold at auction, etc. However, the board above was definitely produced in the late 1960s or so. The first thing you’ll recognize is the awesome, slightly psychedelic logo: Close up of the logo on the Craigslist board. Pic via the original listing.

Here’s a Hang Ten ad from Surfer Magazine in 1969 featuring Mark Martinson. You’ll notice he has a Spherical Revolver under his arm in the photo, and the logo is identical to the Craigslist board currently for sale. One quick note about the board and its logo: in the close-up shot of the board’s logo, you’ll notice there is a small serial number written horizontally (#6670). Nowadays, Rich Harbour signs his hand-shaped boards very clearly. However, I believe this was not the case early on in Harbour’s history. There are other examples of Harbour hand-shaped boards with similar serial number formatting. Kagavi.com interviewed Harbour a few years ago and took a picture of a very collectible 1968 Trestle Special that was hanging from the rafters of the Harbour shop. The Trestle Special was shaped in 1968 and it has serial number #4032. In the case of the Spherical Revolver that is listed for sale, I do not know whether this board was shaped by Rich himself. The Trestle Special documented by Kagavi indicates that there are Harbour handshapes that do not have a signature, but have numbers written horizontally across the stringer.

Finally, the Spherical Revolver for sale on Craigslist comes with an original W.A.V.E. Set fin and the corresponding fin box. This is as clear a sign as any that the board was made in the 1960s, back when these Tom Morey-designed fin boxes were popular. 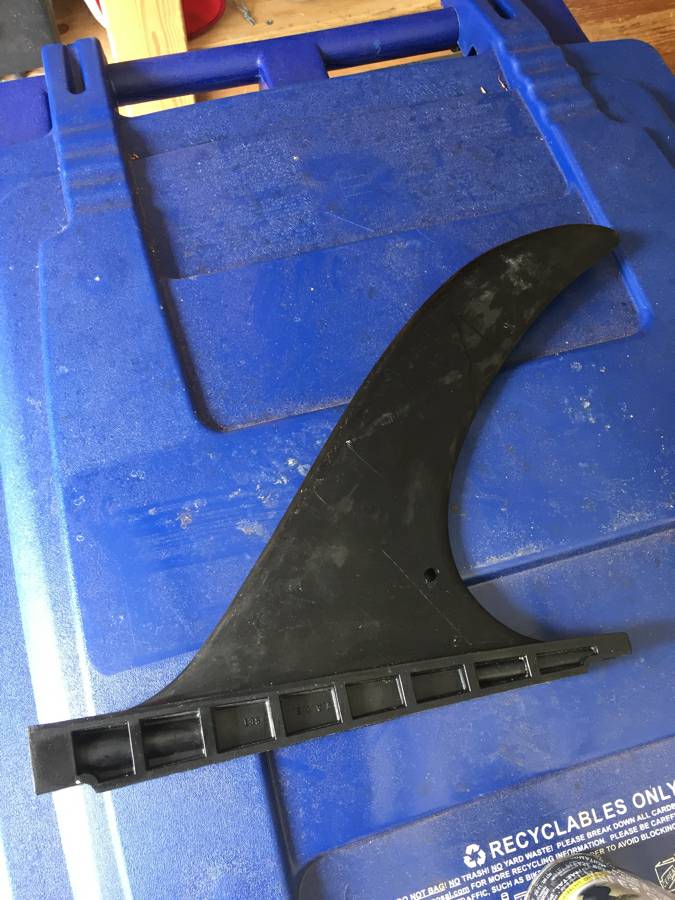 According to the seller, this is the original W.A.V.E. Set fin that came with the board. Pic via Craigslist

It’s too bad there isn’t a definitive history of the Spherical Revolver that is available to fans of Rich Harbour and his surfboards. In the meantime, check out the board that’s for sale listed here.