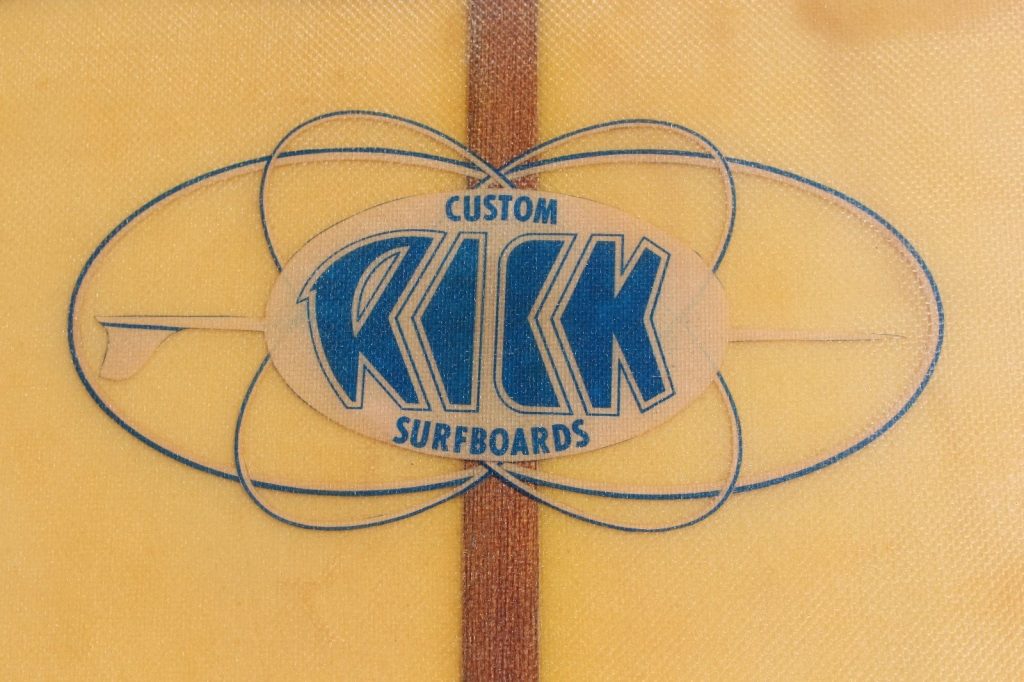 Rick Surfboards is a surfboard label that should be more famous than it is. I admit, part of this stance is informed by my own extensive biases, starting with the fact I have a soft spot for Rick’s clean and classy logos. Setting aside these preconceptions, though, Rick Surfboards boasts a rich history intertwined with some of California surf culture’s most notable figures. Sadly, Stoner’s premature passing in 1977 brought an early end to a label whose influence can still be felt today. Today’s post is an exploration of the early history of Rick Surfboards, and the shapes it produced during the mid-1960s. This is the first part in a series. As always, if you have additional information on Rick Surfboards, please drop me a line!

Rick Surfboards is the eponymous label of Rick Stoner. Stoner was a native of the South Bay of Los Angeles, hailing from Hermosa Beach. In 1955 Stoner decamped to Hawaii alongside friend Bing Copeland. Even in the 1950s the North Shore of Oahu was a proving grounds for the emerging surf scene. Bing and Rick surfed until their funds ran out, then joined the Coast Guard reserves, where they were lucky enough to be stationed on a ship in Hawaii. I believe Rick Stoner is pictured at the far left, and Bing Copeland is in the white boardshorts at the right. Makaha, 1950s. I’m not sure who the other two surfers are, although there’s a very similar version of this picture in the Easy Reader News.

Bing Copeland (left) and Rick Stoner, paying a visit to the Piha Surf Club in New Zealand in 1958. I believe Piha was a lifesaving club, hence the outfits on Bing and Rick. During this visit, Bing and Rick introduced New Zealand to modern lightweight foam surfboards. Pic via Piha

The two would later become business partners: in late 1959, following a trip to New Zealand, they opened Bing and Rick Surfboards in Hermosa Beach.

According to Copeland, shortly after opening up their shop, Rick decided to focus on being a full-time lifeguard, selling his shares of the business to Bing in the process. The newly renamed Bing Surfboards went on to become one of the most recognizable and influential surf brands in the world.

At some point, Stoner must have had second thoughts about the surfboard business. As best I can tell (mostly from the Stoked-n-Board entry for the brand), Stoner established Rick Surfboards in 1963.

Before the dawn of the Transition Era and shortboards, Rick Surfboards, like every other surfboard manufacturer at the time, initially focused on producing beautiful old-school longboards. Examples of 1960s Rick Surfboards longboards are highly coveted and demand high prices at auctions. Here is a rundown of some of the best-known early Rick Surfboards models.

The Rick Surfboards Barry Kanaiaupuni Model is one of its most famous designs. Produced in conjunction with the legendary Hawaiian surfer, The Barry Kanaiaupuni Model first hit shelves in 1966. For the first few years, the BK signature model was a traditional noserider. This changed when the Transition Era hit (more on that later). There’s a great example of a Rick Surfboards Barry Kanaiaupuni model that was listed on eBay. The auction was pulled, so there is no final price associated with the board, but the initial asking bid of $2,500 is telling (as is the fact the seller, Brett7873, has sold a number of collectible boards before.) See below for pictures:

According to the seller, the Barry Kanaiaupuni model above was produced in 1966. The dimensions are 9’6″ x 21-1/2″ x 3″. The board has been restored by none other than Hawaiian surfboard whisperer Randy Rarick, which is the next-best thing to being completely original. One last important note about the board: even though Kanaiaupuni went on to famously shape boards at Lightning Bolt, it’s unclear whether or not he shaped these Rick boards, or merely leant his name to them.

Rick Surfboards also released the Dru Harrison Improvisor model in 1966. Dru Harrison was a well-regarded pro in the 1960s. Like Stoner, Harrison hailed from Hermosa Beach. Dru Harrison in a Rick Surfboards promo shot. Photographer unknown. Pic via the Encyclopedia of Surfing

Here are some pictures of a recent Improvisor model that was listed for sale on Craigslist (board has since been purchased). The dimensions of the Dru Harrison Improvisor example are 9’0″ x 20-1/2″ x 2-7/8″. I believe this board is all original, other than some repairs that were made.

As for the collectibility of the Rick Surfboards Dru Harrison Improvisor Model, it is difficult to say. I haven’t seen any Improvisors sold at auction recently. The one data point I have is an eBay sale that took place almost six years ago. You can find the link here. The board sold for just under $3K, and apparently it had a very low serial number (#67). Sadly, there are no pics on the listing any longer.

Rick Surfboards also produced the UFO Model longboard between 1966 and 1968, according to S-n-B. The UFO Model had a bunch of advanced features at the time of its release, including an interesting scooped out tail, a step deck, and a teardrop concave design on the nose. These features were incorporated to improve the UFO Model’s noseriding capabilities. Adam Davenport of Davenport Surfboards has a nice writeup of the UFO Model’s functionality, which you can find on his personal website here.

Close up of the Rick Surfboards UFO Model tail. Notice the pronounced concave in the deck at the tail, which creates a corresponding rounded bottom. Pic via Davenport Surfboards

Here’s another example of a Rick Surfboards UFO Model. Pics below are from an old Craigslist posting (board is no longer for sale). The multiple stringer configuration is a common characteristic of the Rick UFO. On an aesthetic note, I love the logos, particularly the ones framing the stringer.

The UFO Model can be seen on the far left in the gallery above; it is the board with the blue / green fin and the quadruple stringers (two center stringers, and then one on either edge). The seller listed the board at 10’0″ and claims it was made in 1967. The asking price was $1300, but seeing as the board sold on Craigslist (if at all), I have no insight into the final closing price. Alternate version of the Rick Surfboards UFO Model logo. I suspect this logo is from a later run (late-1960s versus mid-1960s). I say this because the font was later used on many Rick Surfboards models produced during the 1970s. Pic via TJ Carr on Pinterest

There are other longboard models that Rick Surfboards produced during the mid 1960s, but I have yet to see any examples for many of them. It’s difficult to comment on the rarity and collectibility of these boards. For example, I have only seen one D&B Pintail Model, and that was submitted to The Surfboard Project. Here’s a smattering of some random Rick pre-Transition Era noseriders::

Pictured above is a beautiful 9’9″ Rick Surfboards noserider with the classic old-school logo. I love the double laminates on the deck. It has serial number #1252, and the seller claims the board dates to 1965. This board has been listed on and off Craigslist for a while now. The seller has been holding firm at $1200, which I think is reasonable for an all-original 1960s Rick, but apparently I’m in the minority, judging from the fact the board has yet to sell. You can find a link here. Pictured above is another Rick Surfboards longboard. Check out the beefy stringer. It’s also interesting to note the tail block and the glassed-on fin. The Rick Surfboards logo appears to be a few shades of blue lighter than the double-logo version above. This board is listed at 10’6″; pics via an old Craigslist posting.

Here’s a Rick Surfboards model with a rare “Tripper” laminate. Check out the Rick logo on the fin, too! I have never seen this model before, and I haven’t been able to find any other information about it online. Stoked-n-Board has no mention of a Tripper model. Pics via an old Craigslist listing. According to the poster, this may be an experimental board that never saw the light of day. The wedge stringer is taken from the Improvisor Model, and you’ll notice the similarities between the Tripper fin and the one on the Barry Kanaiaupuni Model.

Finally, see above for an example of a Rick Surfboards Noserider with a corresponding logo. Pics via Island Trader Surf Shop, who date the board to 1966. This is a pretty unusual logo, that I have only seen on a few boards. The board measures 10’1″.

As always, my sincere thanks for making it this far through the post. As mentioned earlier, this is the first post in a series that will cover the history of Rick Surfboards. Subsequent posts will cover Rick Surfboards’ Transition Era models — including the famous Barry Kanaiaupuni Pintail — as well as Rick’s transition to the 1970s and single fins produced under the stewardship of Phil Becker. Stay tuned and Happy Shredding!