Greetings, Shredderz! It’s been a while since I put one of these together. What better way to stave off the slow and inexorable encroachment of the work week than by perusing some of the cooler vintage sticks to go on sale over the past few days? Here’s a little selection of boards that have caught my eye recently:

T&C boards have become incredibly collectible over the past few years. This is especially true of 80s T&C boards with outrageous spray jobs. Given the board above is a bit earlier than the most famous T&C models, I’m a little surprised that it seems to be commanding a premium with five days left to go in bidding, as the price is already north of $350. It’s also surprisingly small, clocking in at a cozy 5’9″. As an added bonus, the board was shaped by Dennis Pang (see here for an earlier post about his work for Surf Line Hawaii.)

I’ve written before about how to distinguish whether or not an Aipa sting has been shaped by the man himself. And while I think it’s useful to know whether or not a board is an Aipa hand shape, let’s not forget that there are plenty of other non-Aipa shaped boards that are still awesome. Pictured above is a Rick Hamon-shaped Aipa sting, under the Surfing’s New Image label, that recently sold on eBay. Asking price was $600 but the listing makes it seem as if someone came in with a higher offer. Hamon is a well-renowned shaper in his own right who can currently be found mowing foam at Rusty Surfboards.

The second board in today’s Rick Hamon doubleheader is a Surfing’s New Image 80s single fin that can be found on Craigslist in Charleston. The seller is asking $475. The board looks like it’s in absolutely beautiful condition. They say you shouldn’t judge a book by its cover, but hey, some covers just happen to be way more beautiful than others. The board has an interesting shape, too. It looks like Hamon’s take on the famous McCoy Lazor Zap model. I’ve reproduced a picture of one below, courtesy of excellent online vintage surf purveyor Von Weirdos. 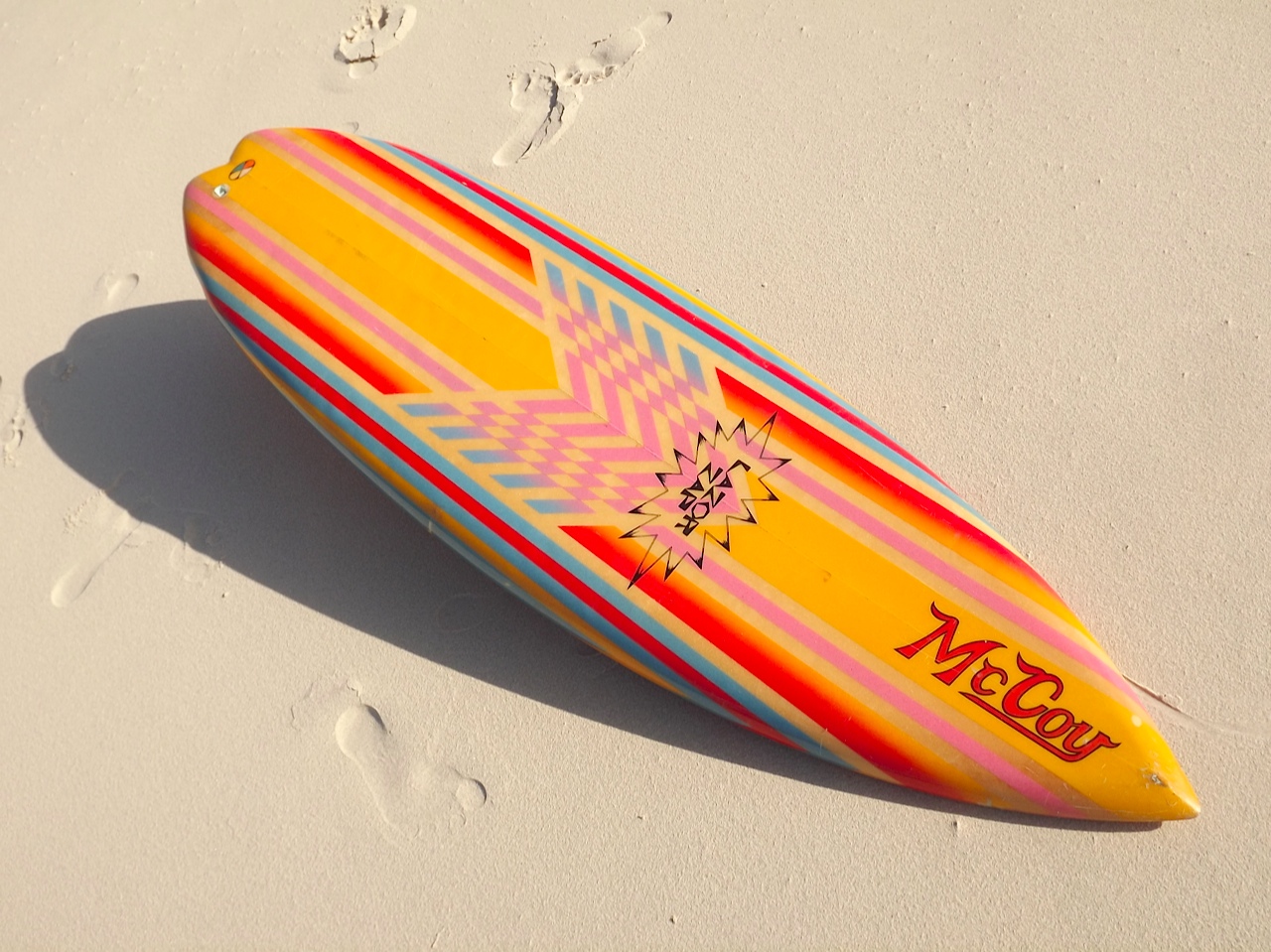 A real McCoy Lazor Zap. Note the similarities between this board and the Rick Hamon single fin above, from the geometric paint job down to the super wide swallow tail. Pic via Von Weirdos

We’ve got two separate Choice Surfboards / Steve Lis fish here, both of which are linked in the header above. The blue quad fin on the left is 5’8″; the twin fin on the right with the wooden keels doesn’t have any dimensions listed. There’s no price on the blue board, and the twin fin is going for $1K. I’m not sure what to make of these Choice / Lis fish boards. As I wrote earlier, I’ve heard these Choice / Lis models are not shaped by Lis, but rather, made from a template he designed. If anyone has any additional info, please drop me a line!