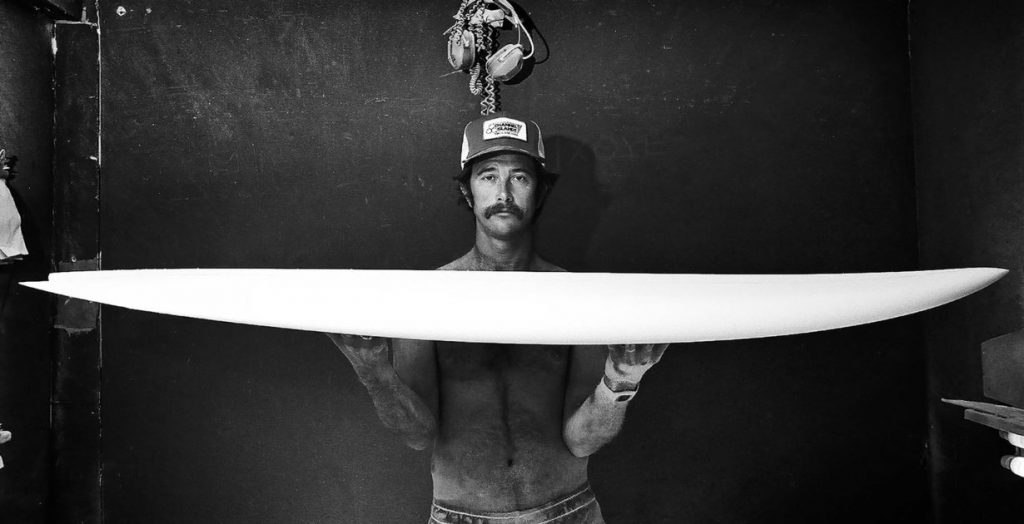 Al Merrick’s greatness is undeniable. What else is there to say about the guy who shaped boards for Shaun Tomson, Tom Curren and Kelly Slater, and forever changed high performance shortboards? As an added bonus, every interview with Merrick indicates that his talent was matched only by his graciousness and humility. I continue to be amazed that Merrick’s hand-shaped boards aren’t in higher demand. I wrote an earlier post about how to identify a genuine Al Merrick signature. The post focused on boards made between the 1980s and 2000s. Today’s post will feature Channel Islands surfboards made during the during the brand’s early years (1970s through early 1980s), some of which pre-date the brand’s now-famous hexagon logo. Continue reading below for an unnecessarily detailed journey into the boards from Al’s early years… Awesome old Channel Islands Surfboards ad that pre-dates the famous hexagon logo. There are some really funky 70s shapes in there, including some stings, a lightning bolt, and some winged pintails. Source unknown. I have never seen an example of a signature like this one. Check out the additional signatures from Bob Haakenson and Dave Johnson. The fish icon has a unique thick outline. Pic via Joshua Speranza & Vintage Surfboard Collectors Facebook Group

This might be one of the coolest vintage Channel Islands boards I have ever seen. First, check out the Channel Islands ad above, which was taken sometime in the mid-1970s. You can see that none of the boards in the ad have the now-famous CI hexagon logo. Second, the swallow tail board with the fish airbrush is clearly visible in the center of the ad. The airbrush was done by Jack Meyer, who was a Santa Barbara legend in his own right. Miraculously, this board has survived, and it belongs to the owner of Pig Dog Surf Shop. You can find the original Facebook post about the board here, which has many more pictures and info. The second picture is a close-up of the stringer, where you can see an Al Merrick signature with his full name, in addition to longtime glasser Bob Haakenson. The fish design, which appears on so many of Al’s boards, has an outline, which is unlike any other example I have seen on a Channel Islands board.

Channel Islands 1970s single fin. There is an inscription on the stringer, but it’s unclear whether or not Al signed or shaped this board. Pic via Mollusk Surfboards

Pictured above is a Channel Islands single fin that was dated to 1971. This board originally appeared for sale at Mollusk Surf Shop. It is currently for sale on SurfboardHoard.com (link here). There is an inscription on the stringer, and you can see a closeup here. It’s difficult to make out anything in the inscription other than the fish design, which is a near constant presence on CI boards. The verdict: it’s difficult to say whether this is a genuine Merrick handshape, given the lack of an identifiable signature.

Unfortunately, I don’t remember where I found this picture. If it belongs to you, let me know so I can give credit where it is due! I believe the board above was made in the late 1970s or early 1980s. You can see the Channel Islands hexagon logo on the bottom. According to Stoked-n-Board, the hexagon logo wasn’t introduced until 1979. This board looks extremely similar to a Channel Islands Tri Plane Hull model I wrote about almost a year ago. There is a clear signature on the stringer that has Al’s full name. The serial number is #6106, compared to #5374 on the CI Tri Plane Hull. The glassed-on wooden fin is interesting: I haven’t seen any other CI boards with a similar fin setup.

Early 80's Tri Plane Hull Channel Islands Twinne hand shaped by Al Merrick. 6'1" x 20 3/4 x 3. Wing swallow tail ( around the birth of the Hurley RAB 1) The story about how Rabbit borrowing Tom Currens Twin Fin to form what was.. I have had the pleasure in continuing the story telling on this board in riding it in some Perfect flawless Ranch runners and blessed to have acquired it. Will cherish it and pass it on to generations to come . All original. @cisurfboards @travlee @curfuffle #triplane #channelislandssurfboards #buggscollection #surfboardcollector #surfboardline #vintagesurfboard #1980 #twinfin #tomcurren #builtforspeed

See above for an example of an early 1980s Channel Islands Tri Plane Hull twin fin that also bears Al’s signature with his full name, and not the “Fish / Al” combo that is common on later Merrick shapes. If you don’t follow Buggs on Instagram, you should! The serial number on this board is #6383, dating it a little after both of the single fins mentioned in the above paragraph.

Finally, we have some surfboards that I simply don’t know how to classify. The picture above comes from a late 1970s / early 1980s CI single fin that I wrote up earlier this year. The more I look at the signature above, the more I am convinced that this is simply a laminate. The “Shaped By” is obviously printed, and the signature is either printed or is in dark ink, unlike most of the examples above. Even though I believe the signature above is a laminate, I think it’s still possible the board was hand-shaped by Al. I’m just not sure.

Look at the Al Merrick “signature” on this board. You can clearly see that this was intended to be a laminate, and not any sort of evidence. Moreover, this particular board has the “Al / fish” combo signature on the stringer. Pic via Douglas Pearson on Vintage Surfboard Collectors Facebook Group.

For example, see the board pictured directly above. It is an odd combo: it has a signature that is an obvious laminate, but it also has a clear Al hand signature on the stringer. I believe the board above was likely made during the early 1980s, right before the thruster took off, but I’m not certain.

How can one tell whether or not a board was shaped by Al Merrick? Well, I hate to even say this, but it depends. There are many examples of early Channel Islands Surfboards that do not have a clear Al Merrick signature, but were still shaped well before the brand shifted to mass production of its designs. I suppose it’s possible that Merrick employed ghost shapers, but I can’t say for sure. One trend is also clear: during CI’s early days, Merrick had a habit of signing his board with his full name, before transitioning to the “Al / fish” combo during the 80s and the subsequent years of his career. If you have additional information, please let me know!

See “How to Tell if Al Merrick Shaped Your Channel Islands Surfboard” here.

Picture at the top of the post by Jimmy Metyko. Pic via The Surfer’s Journal