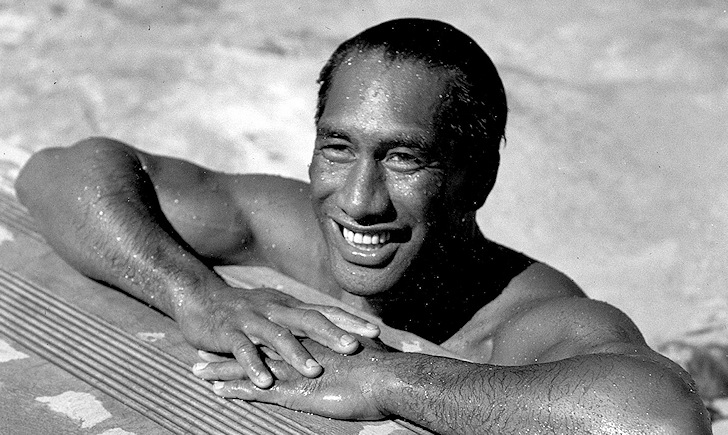 Greetings, Shredderz, and welcome to a very special edition of Sagas of Shred! Today is the birthday of none other than Duke Kahanamoku, perhaps the single most important person in the history of the great sport of surfing. Today would have been the Duke’s 127th birthday. In the process of researching today’s post, I was stunned by the things I learned. I had always heard about Kahanamoku’s prowess as a swimmer, but I had no clue he won five medals for the United States between 1912 and 1924. (I highly recommend this New York Times profile of Kahanamoku for even more stories of his all-around bad-assery.)

Kahanamoku, at left, accepting his gold medal at the 1912 Olympics, from King Gustav of Spain. Pic via Surfer Magazine.

Post-Olympics, Kahanamoku went on to a varied and fascinating career, including a smattering of movie roles and a stint as sheriff of Honolulu. Kahanamoku didn’t just play heroes, though: in 1925, he single-handedly saved eight people’s lives during the rescue of a sinking boat off the coast of Newport Beach.

Kahanamoku in a still from “The Isle of Sunken Gold”

It is difficult to overstate Kahanamoku’s contributions to surfing. He arguably played a bigger role in the sport’s development than anyone else, thanks to his tireless work as a true ambassador of the sport. It is safe to say Kahanamoku is an embodiment of Hawaii’s famous aloha spirit. Mahalo, Duke, and happy birthday!