Clark Foam Ad from the 1960s: Sagas of Shred 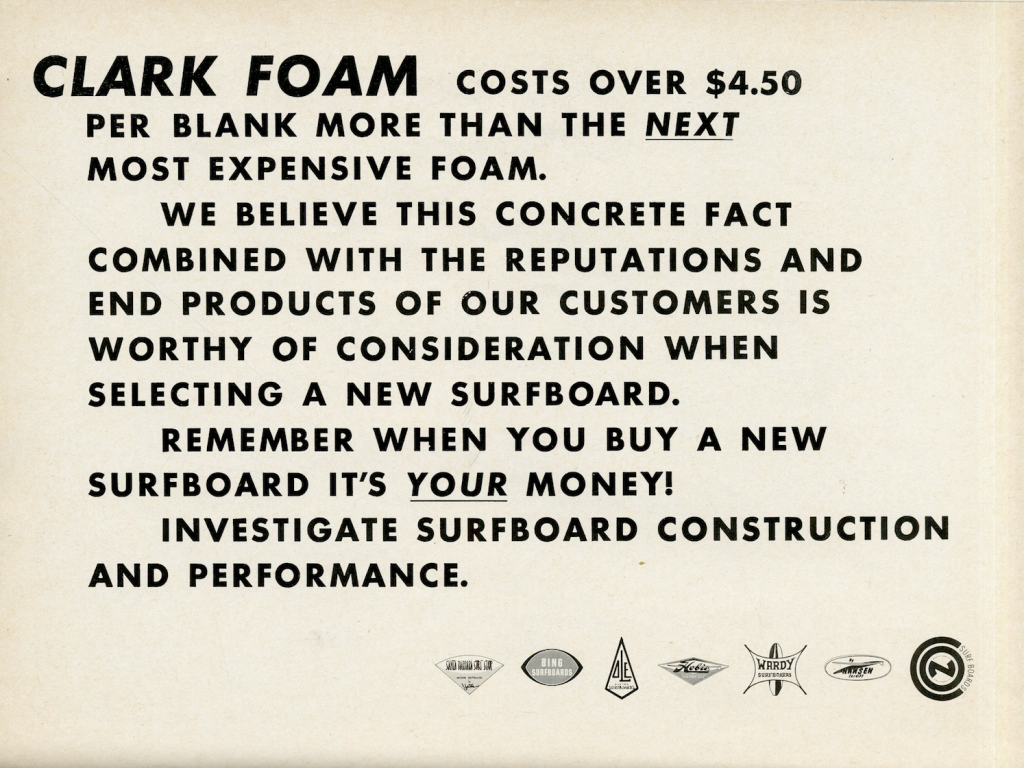 Greetings, Shredderz! Welcome to yet another installment of Sagas of Shred. Every Thursday we feature a different slice of surf history, and today’s entry sheds a light on one of the most accomplished businessmen the surf industry has ever seen: Gordon “Grubby” Clark, the founder and CEO of Clark Foam. Before its abrupt closing in 2005, Clark Foam was one of the most fearsome forces in the surfboard industry. There are endless stories about Clark’s ruthlessness. The Surfboard Project has an anecdote, via Joel Tudor, about how Donald Takayama’s first label went under after Clark Foam denied him blanks. Surfer Magazine recently ran a retrospective on the Clark Foam closing, which includes similar tales of strong-arm tactics.

In the early 1960s, though, Clark had yet to establish its dominance, and this ad, at least, makes an earnest appeal to quality and performance instead. I love the fact that just about every single big name surfboard brand at the time has their logos present: Yater, Bing, Ole, Hobie, Wardy, Hansen, and Con. Of that list, only Wardy no longer continues to produce boards (although Con is a completely different company, and Bing Copeland has ceded control to well-regarded shaper Matt Calvani.)

For a great article on the early years of Clark Foam, and how Grubby and Hobie Alter helped lay the groundwork for the modern surfboard industry, I recommend the “727 Laguna Canyon Road” feature in The Surfer’s Journal.

Hope you enjoyed this entry in Sagas of Shred, and tune in next Thursday for what comes next!