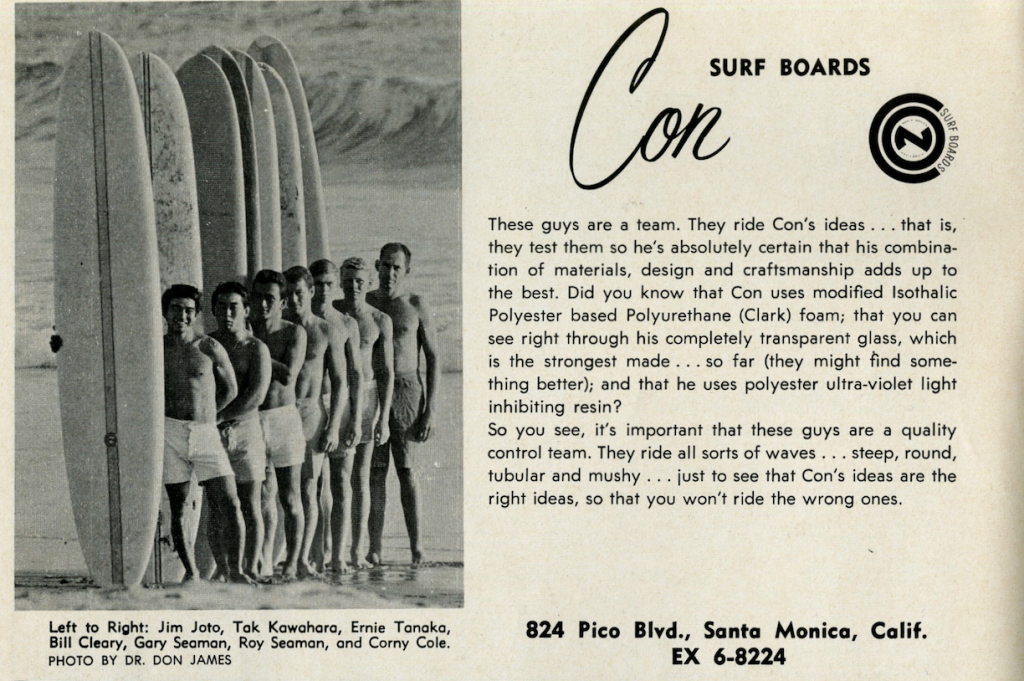 Greetings, Shredderz! Welcome to the best part of your Thursday: another blast from the past, courtesy of Shred Sledz’s “Sagas of Shred” series. Today we’re featuring a vintage Con Surfboards ad that originally ran in the Dec / January 1963 issue of Surfer Magazine (Volume 4, Number 6). Con Surfboards, of course, is a Shred Sledz favorite, thanks to the timeless design of the logo and the brand’s Southern California pedigree.

The interesting thing about this vintage Con Surfboards ad is the team lineup. To be honest, I didn’t recognize a lot of these names at first glance. I can’t find any information on Jim Joto. Tak Kawahara helped pioneer surfing in his ancestral Japan, for which he earned the title as the “Father of Japanese Surfing.” Later on Kawahara founded CHP and helped distribute Town & Country Surfboards on the West Coast, according to this Swaylocks thread. Ernie Tanaka became a well-known shaper in his own right, and later helped put out some Paul Strauch signature models. Bill Cleary sadly passed away in 2002; but before then he made a career as a well-known surf journalist. I could only find references to Gary and Roy Seaman in random discussion threads online. From what I understand, the Seaman brothers were early Con Surfboards shapers. Finally, Corny Cole became a well-known animator, even winning an Academy Award for Best Animated Short Film!

There also happens to be a vintage Con Surfboards Competition Model that is currently on sale on Craigslist in Los Angeles. You can find a link to the board here. It hurts me to post this one. In an ideal world, the board would be the newest member of the Shred Sledz Signature Collection. Sadly, blogging about vintage sticks — yes, even Con Competition surfboards — isn’t quite as lucrative as I had been led to believe!

Close up of the logo on the Con Surfboards Competition Model. Pic via Craigslist

The poster claims the board is all original, and it is in lovely condition. There are a few tiny dings here and there, and the seller hopefully provided close-up pictures of the areas that do need a little attention. The board measures in at 9’4″ x 22″ x ~3″ and the asking price is $1500. The price seems quite fair, and I have seen similar vintage Con Surfboards models go for similar prices before. The other interesting detail is the fin on the board. Once again I refer you to the Swaylocks thread I mentioned earlier. The fin exists somewhere between being a glass-on fin and a swappable fin box design. Some (and perhaps all, I’m not sure) Con Competition surfboards made during the 1960s featured fins that were fitted into routed boxes on the stringer, and then glassed over without completely covering the fin.

You can check out the Con Surfboards Competition Model for sale on Craigslist here.