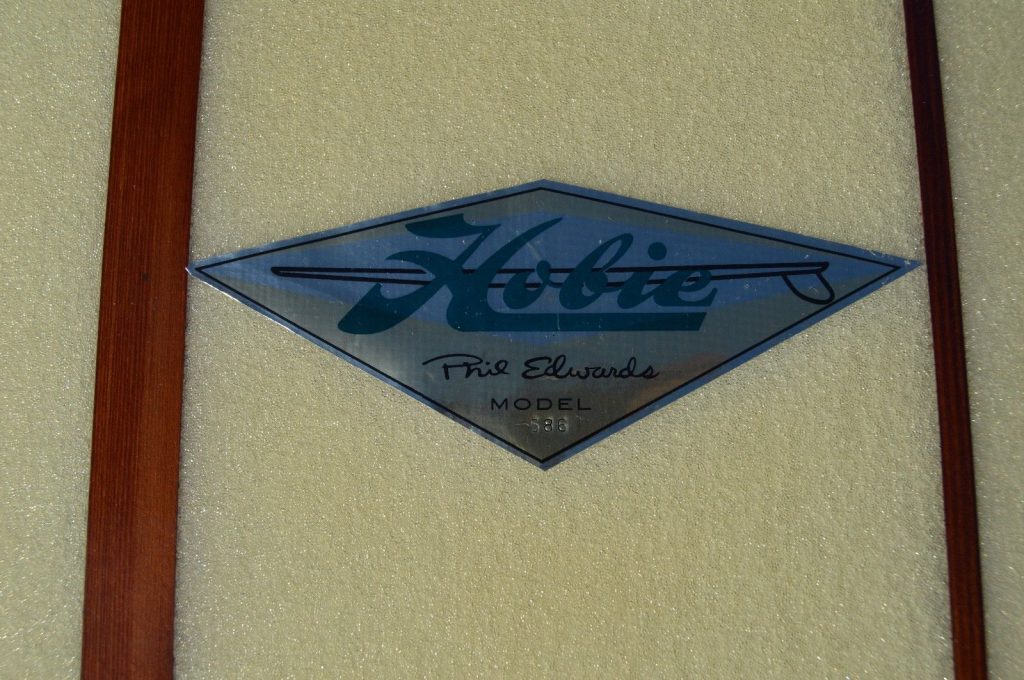 Greetings, Shredderz! Here at Shred Sledz HQ we like to think of ourselves as equal opportunity surfboard enthusiasts. Stoke levels remain high for all kinds of vintage surfboards, ranging from underground Santa Cruz shapers to household names like Gerry Lopez. Even so, it can be difficult to resist the urge to play favorites. Such is the case with the Hobie Phil Edwards Model surfboard, which holds a special place in the hearts of Shred Sledz staff. If you missed our earlier post covering the Hobie Phil Edwards model, I urge you to check it out here. It’s a detailed look at the various Hobie Phil Edward Model surfboards that have been sold at auction. As always, if there are any missing boards you know of, don’t hesitate to drop me a line!

Pictured above is a Hobie Phil Edwards Model Surfboard that is currently for sale on eBay. Pics are all via the eBay listing, which you can find here. The board is exciting for a number of reasons. First of all, it’s an example from the original run of the Hobie Phil Edwards boards, as evidenced by the foil logo and the serial number. This is the first time I have seen board #586 appear (my previous post covered boards with serial nos #999, #865, #103, and #479). The seller dates the board to 1963. You can see it has the classic triple stringer setup, with a 3/4″ central stringer made from redwood, and then two 1/4″ redwood stringers flanking it on either side. The dimensions of the board are 9’3″ x 20-7/8″ x 3″, which should be provide ample paddling power on top of all the necessary style points. It’s interesting to compare the lengths of the various boards: #103 is 9’9″; #865 is 10′; and #479 is also 10′. I was unable to find data on #999.

It’s unclear to me the extent to which the board has been restored. The listing mentions that #586 has been re-glossed by surfboard whisperer Randy Rarick, but I’m not sure if that amounts to a total restoration. Close up of the fin. The seller claims this is the original one that came with the board. If so, it’s remarkable that it has retained its color over the years! Pic via eBay

The fin stands out as well. The seller claims that this is the original “two-tone powder blue fin.” Board #999 has an identical fin, although it looks like the color has faded over time. It’s interesting to note that boards #103 and #479 have wooden fins. The auction listing for #103 describes it as a reverse mahogany fin. Board #865, meanwhile, has what looks like a fiberglass fin similar to #586, but it is a burgundy color. I’m not sure if there’s any discernible pattern for why a given Hobie Phil Edwards Model surfboard would come with one type of fin or another. Goodness gracious, this board has some beautiful lines. Pic via eBay

If you’re interested in the board — it would make an ideal gift for your favorite vintage surfboards blogger — please check it out here.