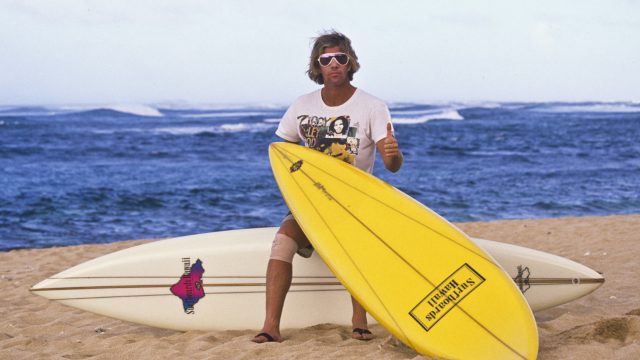 Greetings, Shredderz! Those of you who follow me on Instagram may recognize the photo above from my Instagram account, where I posted it a few days ago. (You can check out the official Shred Sledz Instagram account here.) The photo was taken by Tom Servais on the North Shore of Oahu, and it features none other than Aussie legend Rabbit Bartholomew posing with some beautiful big-wave guns. As soon as I posted the photo, the current owner of the yellow board — a Surfboards Hawaii gun shaped by Dick Brewer — reached out and was kind enough to send over some more pictures. Thank you to Luke Carter for supplying the pics. If you’re interested in vintage surfboards and fast cars, give Luke a follow on Instagram!

As you can see, the board is still in great condition, even after all these years.

Close up of the Dick Brewer signature on the stringer. Pic via Luke Carter

You can see a clear example of a Dick Brewer signature on the stringer, alongside some measurements. At 9’5″ x 20″ x 3-1/4″, the gun was clearly shaped for waves of consequence. Close up of the glass-on fin on the Dick Brewer Rabbit Bartholomew gun. Pic via Luke Carter

Luke was also kind enough to point me to a photo that gives some indication of when Brewer may have shaped this board. The photo above was supposedly taken at the opening ceremony for the Eddie Aikau contest at Waimea Bay held in the winter of 1989 / 1990.

Occy (left) and Rabbit, showing off some sweet Dick Brewer guns. It’s interesting to note that Occy’s board has the 1980s Brewer laminate, while Rabbit’s board has the Surfboards Hawaii logo. Photo by Peter “Joli” Wilson / Joliphotos.com

I actually found a copy of the program for the 1989 / 1990 Eddie Aikau contest on eBay, and neither Occy nor Rabbit Bartholomew were invitees. Nonetheless, given Occy and Rabbit’s ages in the Joli photo above, I believe the photo was taken sometime during that decade. I suppose it’s also possible that Occy and Rabbit could have showed up to the Eddie’s opening ceremony with their boards in tow, but that would have been unusual given that is usually reserved for competitors.

Per the title of the blog post, Luke also tells me that apparently the board was originally shaped for Hawaiian big-wave charger Darrick Doerner. This theory makes a ton of sense. For starters, Bartholomew’s brash attitude initially made him a target in Hawaii, as documented in “Bustin’ Down the Door” and even a sketch on “Drunk History.” Moreover, Doerner was something of a Waimea Bay specialist — for which the Brewer board would have been an ideal fit — and also boasted a long association with Brewer. How the board would have made its way from Doerner to Rabbit is a mystery to me, but I’m glad it did, given the rad pictures that resulted!

I’d also love to know what happened to the other board in the picture at the top of the page. I love the splash of color on the Surfboards Hawaii logo. I’m assuming the board Rabbit’s sitting on must be another Dick Brewer, but without a picture of the stringer, there’s no way to be sure.