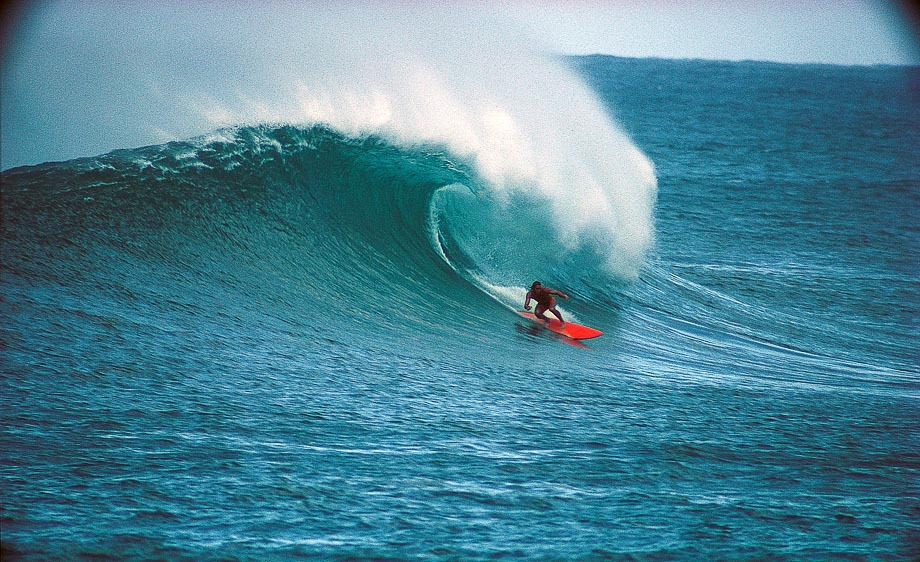 Greetings, Shredderz! Today’s post is Part II of our exploration of one of surfing’s most influential but still somehow underground surfboard labels: Rick Surfboards. If you missed Part I, which covers Rick noseriders and pre-Transition Era models, please check it out here. The initial version of the Barry Kanaiaupuni Model, produced starting in 1966, was a noserider. Rick Surfboards BK Model longboards continue to command high prices; one recently sold at the California Gold vintage surf auction for $2,450.

In 1967, with the Transition Era underway, Rick Surfboards released a shorter surfboard made for the steep, challenging conditions of Hawaii’s North Shore, and, of course, its namesake’s radical surfing. The end result was the Barry Kanaiaupuni Pintail model.

Barry Kanaiaupuni and one of his signature bottom turns. Sunset Beach, 1972. Photo by Jeff Divine.

From what I can tell, the longboard version of the Barry Kanaiaupuni Model was produced only during 1966 and 1967. I believe sometime in 1967 Rick Surfboards began producing the Pintail version of the BK Model. Stoked-n-Board claims the BK Pintail was produced until 1982. I find this unlikely for two reasons. First, just about every BK Pintail I have seen has a distinct Transition Era outline, which would have been outdated for the 1970s, much less the early 1980s. Second, Barry Kanaiaupuni started shaping for other brands during the early 1970s.

The Encyclopedia of Surfing tells us Kanaiaupuni began his shaping career at Rick Surfboards, followed by stints at Country Surfboards, Surf Line Hawaii, and then Lightning Bolt. This sequence makes me think Rick Surfboards ceased production on the BK Pintail well before 1982. There are many examples of boards shaped by Kanaiaupuni for other brands well before 1982: Surfboard Hoard has a Chuck Dent brand shaped by BK dated to 1969; I have seen a BK Surf Line Hawaii board dated to 1971; and Surfing Cowboys has a Lightning Bolt BK board supposedly made in 1972. Based on this evidence, I believe the Rick Surfboards Barry Kanaiaupuni Model was produced from 1967 until the early 1970s, at the latest.

Pictured above is an unusual example of the Rick Surfboards BK Pintail. Although dimensions for the board are not listed on the post, you can see the board has a traditional big wave gun shape. Compare this to all the examples below, which are shorter and have fuller noses paired with long, drawn out pintails. Nor is the pintail gun above a noserider, a la the board featured in the first post. The logo is interesting, too. It is the only example I have seen that reads “Barry Kanaiaupuni Model Pintail.” All the other versions in this post read either “Barry Kanaiaupuni Model” or “Barry Kanaiaupuni Pintail.” The board has been fully restored by Randy Rarick. The restoration makes me think it’s possible the logo is not all-original. See below for a pic comparing the length of the board to a Hobie Dick Brewer Model. I couldn’t find dimensions for the gun, but it looks considerably longer than all the other BK Pintails featured in this post.

Pictured above is another Barry Kanaiaupuni Pintail oddity. Pics are via the USVSA. As you can see, the board is clearly a Pintail version of the Rick Surfboards Barry Kanaiaupuni Model. However, it does not have a Pintail logo. The Rick Surfboards laminate is in the original font, too. Note the board is numbered #442 on the stringer; more on this later. This section focuses on “standard” versions of the Rick Surfboards BK Pintail. I define these boards as follows: they possess a Transition Era outline, with a full nose and dramatic, pulled-in pintail; and the logos bear the updated Rick Surfboards font and the “Pintail” text (versus boards that simply read “Barry Kanaiaupuni Model”).

A number of the standard Rick BK Pintails have been sold at auction recently. The picture above is from a board that sold at the Vintage Surf Auction in 2015. The Rick BK Pintail above is dated to 1967, and it has the serial #368. No dimensions are listed for #368. One thing that throws me for a loop is the ordering of the serial numbers. #442, the board with the blue fin that appeared earlier in the post, does not have the updated font on the Rick Surfboards logo, nor does it have the Pintail text. The numbering indicates #442 was made after #368, but the logo suggests otherwise. BK Pintail AKA Buggs’ Board. This is an all-original example of a standard Rick BK Pintail. Pics via Surfboardline.com

Buggs, the proprietor of Surfboardline.com, has a number of awesome Rick BK Pintails, which he has featured on his website and Instagram. The board above appears on Surfboardline.com. No serial number is listed for what I’ll call “Buggs’ Board.” I think it’s very possible Buggs’ Board and #368 are one and the same, but I can’t be sure without seeing pictures of the fin on #368. Buggs’ Board is all-original and it measures in at 8′ x 22″ x 2-1/2″, compared to #442, which comes in at 7’1″.

Pictured above is a 1967 Rick BK Pintail with an era-appropriate acid splash paint job. The board was sold at a USVSA event close to ten years ago. Pics are via the auction listing, which you can find here. The Acid Splash board measures in at 7’10”. Other than the rad airbrush, it looks quite similar to the other Rick BK Pintails listed above, from the silhouette down to the W.A.V.E. Set fin box.

The board above comes courtesy of French surfboard site Surf-Longboard.com, and it is currently being offered for sale at €1,000. You can find a link to the board here. The French Board measures in at 7’4″. It has a very similar outline and length to the other Rick BK Pintails posted above. Close up of the fin on the French Board. The fin looks different — it has more rake and is thinner towards the tip — than its counterparts on the Acid Splash Board and #442. You can also see a bit of color towards the base of the fin. Pic via Surf-Longboard.com

The thing that stands out about the French Board is its glass-on fin. This is the only example I have seen without a W.A.V.E. Set fin box. The French Board also has some nice pin lines, reminiscent to #442.

There are a few Instagram posts that show off the details of the tail on the French Board. I assume this is true of the other Rick BK Pintails as well, but it’s difficult to say without any close-up pics. The only triple stringer version of the Rick BK Pintail I have seen to date. Also note the signature on the bottom right. I can’t say for sure that it’s legitimate, but it’s promising!

The yellow board shown above is the only Rick Surfboards Barry Kanaiaupuni Model I have seen that looks like it was signed by BK himself. The board was previously posted for sale on SurfnHula.com. You can find the link here. I don’t know whether or not this is a genuine BK signature. I have seen a variety of boards signed by BK, and his signature seems to vary.

There you have it — every single Rick Surfboards Barry Kanaiaupuni Model Pintail I have ever laid eyes on. I’m still bursting with questions: did BK shape all of these, or did Rick Surfboards use a ghost shaper? (I’m leaning towards the latter). What were the exact years during which the Rick BK Pintails were produced? How to explain the varying lengths of the boards — were they offered in different pre-set sizes? And, perhaps most importantly, are these boards every bit as cool as they look? As always, if you have any additional information or pics about the wonderful Rick Barry Kanaiaupuni Model, please give me a shout!

Check out the earlier post in the Rick Surfboards Deep Dive series here. Coming soon is Part III, in which we will delve into the beautiful single fins Rick Surfboards produced during the 1970s.

Photo Credit at the top of the page: Barry Kanaiaupuni surfing Sunset Beach, 1969. Photo by the peerless Art Brewer.