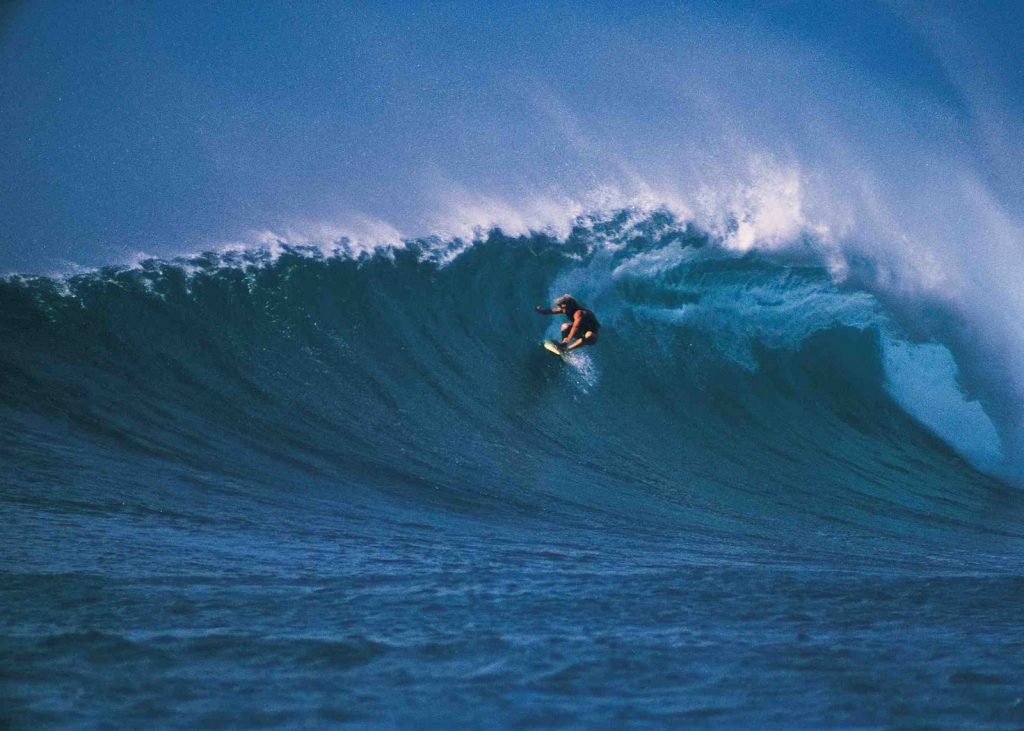 Hawaii is, and will always be, the center of the surfing world. Even as globalization pushes surfing into new and interesting corners, like retro longboarding’s unlikely resurgence in Indonesia, Hawaii is not only the birthplace of surfing, but the very place where much of its history continues to be made.

The 1970s were a particularly fertile and fascinating time in surfing’s development. It was during this decade that Australians descended upon the North Shore of Oahu, raising eyebrows with their brash surfing and matching attitudes. While the “Bustin’ Down the Door” episode has rightfully earned its spot in surfing history, the arrival of top Australian pros on Hawaiian shores had another side effect: many fruitful collaborations between Aussies and their Hawaiian counterparts.

I wrote an earlier post about a board Terry Fitzgerald shaped for Dick Brewer, which you can find here. Mark Richards is another example of an Australian surfer / designer who found inspiration in the Hawaiian boards of the 1970s. MR still counts Ben Aipa and Dick Brewer among his influences. MR has written some great posts on the subject, and he continues to produce his version of an Aipa sting today! And if you prefer the reverse commute, Von Weirdos has a Hot Buttered surfboard shaped by Owl Chapman.

Today’s post, however, covers another Terry Fitzgerald board: a rare example of a Terry Fitzgerald Lightning Bolt collaboration. The story behind the board comes courtesy of Gavin Scott, an Australian collector with a special interest in what he calls the “Aussie / Hawaiian cross-pollination.” During the early 1970s, Lightning Bolt founders Gerry Lopez and Jack Shipley invited Fitzgerald to do some shaping for the brand while he was spending the winter on the North Shore. Fitzgerald already had Hot Buttered up and running, but the way Fitz tells it, he took on the gig shaping for Lightning Bolt for some money on the side and to refine his designs. The board below is one of but four boards Fitzgerald shaped for his initial run at the Lightning Bolt shop. Terry Fitzgerald posing with one of the few surfboards he shaped for Lightning Bolt. Note the fluted wings in the tail, which TF attributes to Reno Abellira’s influence. Pic via Gavin Scott

The Terry Fitzgerald Lightning Bolt board is filled with all kinds of beautiful details. I’m particularly drawn to the precise double-winged pintail and the striking white pin line on the bottom of the board: Close up of the fin. Check out the white pin line! Pic via Gavin Scott

The Terry Fitzgerald Lightning Bolt board also has some interesting laminates. On the deck you can see the famous Bolt laminate. The bottom, though, has a Lightning Bolt logo that I have personally never seen before. The board’s owner tells me that the text Lightning Bolt logo along the stringer is something that Roy Stamm did with many of the boards he glassed. Unusual Lightning Bolt logo along the stringer on the bottom of the board. Apparently this was a common technique for Roy Stamm, who glassed the board. Pic via Gavin Scott

After purchasing the board, Gavin was able to get a certificate of authenticity from Terry Fitzgerald that details the board’s history. I have included a photo below: Certificate of Authenticity by Terry Fitzgerald for the board pictured above. TF goes all out on these certificates! Not only does Fitzgerald get deep into the design elements, he also provides great context on the state of surfing during the time the board was made. Pic via Gavin Scott

As you can see in the certificate of authenticity, the board was shaped in Hawaii in 1973. I love how TF goes through the various influences that informed the board’s final design, including a nod to Barry Kanaiaupuni’s radical stylings at Sunset Beach. The board truly is a product of Hawaiian and Australian influences, spanning Fitzgerald’s experiences from Narrabeen to Sunset. I love how comprehensive the certificate is, going as far as to credit Roy Stamm with the lovely glass job.

Randy Rarick also played a part in this board making its way back to Australia. Rarick was kind enough to share some back story on the board. Apparently Rarick found the Terry Fitzgerald Lightning Bolt on the West Side of Oahu and then turned it over to a friend. Eventually the board made its way to Gavin Scott, its current owner. Scott was responsible for getting the certificate of authenticity and the back story from Terry Fitzgerald. Many thanks to Gavin for making this post possible! You can also check out Gavin’s activity on the Vintage Surfboard Collectors Group on Facebook, where he is kind enough to share more of his incredible collection.

Photo at the top of the page taken by Jeff Divine.