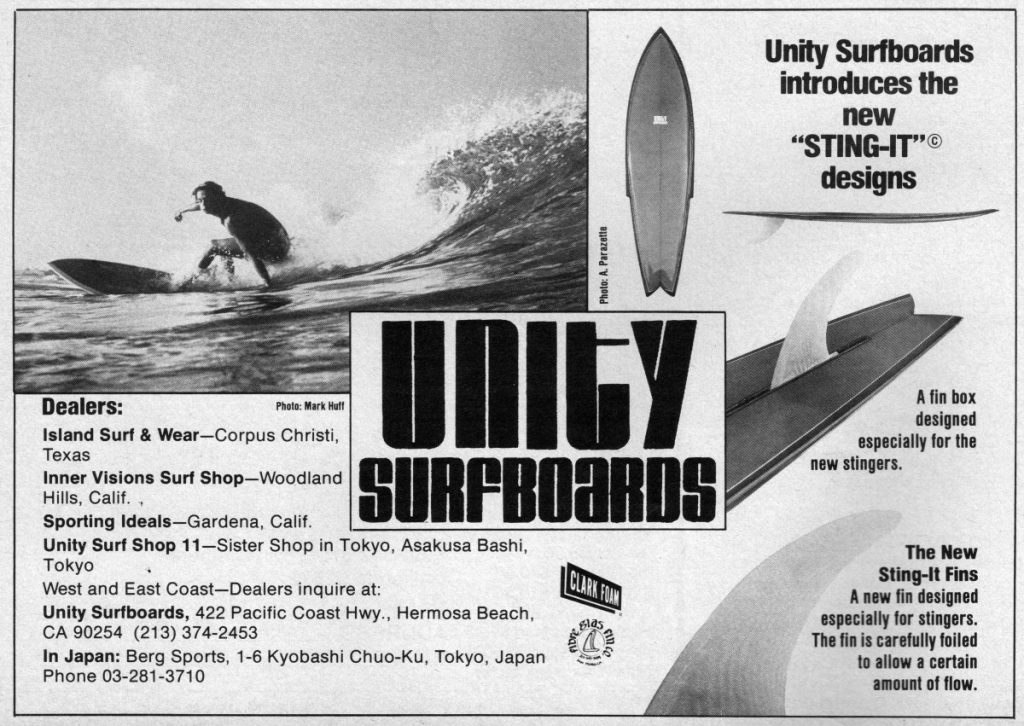 Greetings, Shredderz! Today’s Sagas of Shred post focuses on a South Bay brand of yesteryear: Unity Surfboards. There isn’t much info to be found on Unity, other than the requisite Stoked-n-Board entry. Unity Surfboards was the brainchild of Pat Reardon, who later shaped under his own name. According to Easy Reader News, as of March of this year, Reardon continues to shape boards for South Bay surfers.

The Unity Surfboards ad pictured above apparently ran in 1977. This makes sense, given the ad features a distinctive Sting shape. Here at Shred Sledz HQ, there are few boards more beloved than the Sting design. And while Aipa’s Stings will forever be held in high regard, I get a big kick out of seeing Sting interpretations from other shapers, whether that’s Con Surfboards or even Al Merrick and Channel Islands.

Unity Surfboards dubbed their design the “Sting-It.” You’ll also notice in the ad that Unity refers to the Sting-It as a stinger. The debate over Sting or stinger rages on; I have heard that it’s the former, and until someone can prove otherwise, I’ll continue to refer to them as Stings.

There also happen to be two separate Unity Sting-Its that are listed for sale. The first board is can be found on Craigslist in San Pedro, not far from Unity’s Hermosa Beach stomping grounds. You can find that Sting-It here. It’s listed at 6’8″, and it’s not in perfect condition, though it certainly looks rideable. (There’s also another Unity Surfboards single fin on Craigslist in Orange County, which you can find here.)

The board pictured above is currently listed on eBay. There’s no mention of Unity on the eBay listing, but it’s quite clear from the pictures. Pics via the eBay listing, which you can find here. The asking price for the eBay Sting-It is $600, which seems a bit steep. Nonetheless, it’s a great example of a classic 1970s design (even though a part of me cringes at the black leash plug that seems to have been added after the fact).