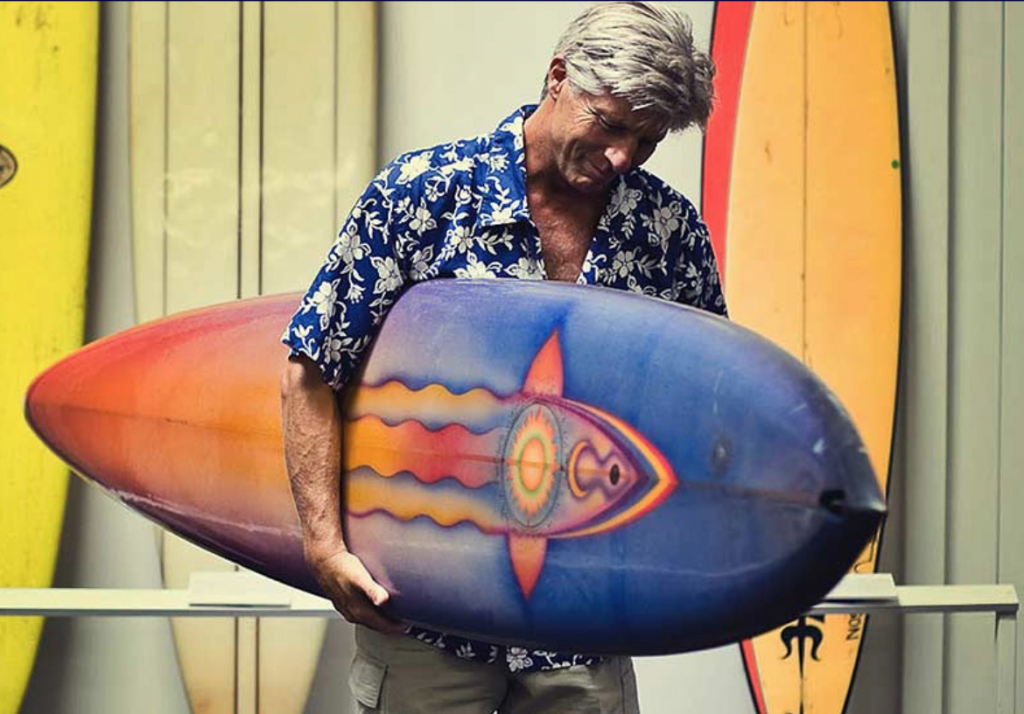 Greetings, Shredderz! Today we have a lovely surfboard that involves a few of the best-known figures in San Diego surf history, including none other than Mike Hynson. Over his long and illustrious career, Hynson has been associated with many well-known labels from his own label, Hynson Surfboards, to other recognizable brands like Rainbow Surfboards, Gordon & Smith, and Bahne. Hynson’s history is a colorful one, often quite literally. He first burst onto the scene as one of the stars of “The Endless Summer”, and then became a figurehead of sorts for the psychedelic 70s, thanks to the equally trippy and elaborate airbrushes on his boards. For an excellent rundown on Hynson’s involvement with drugs and the notorious Brotherhood of Eternal Love, I recommend this long-form Surfline feature on the subject. Close up shot of the Hynson downrailer featured in the picture at the top of the page. Photo by Jeremiah Klein; pic via Surfline

Hynson Surfboards is still in business today, and the man himself continues to churn out hand shaped designs. Today’s post concerns an older board that, upon first look, doesn’t have any overt ties to Hynson.

First, a little background: Hynson is widely credited with creating the down rail, which helped usher in a new era of high-performance surfing during the 1970s. None other than all-around guru Gerry Lopez claims the down rail was one of the critical elements in turning shortboards into fully functional surf craft. One little-known fact about the down rail is that one of Hynson’s first test pilots for the design was none other than Herbie Fletcher!

It’s difficult to put together an exact timeline of when Hynson shaped for the various surfboard labels with which he is associated. Gordon & Smith was an early stop, and Hynson’s signature red fin model is still coveted by collectors today. Hynson worked at Hobie and also founded Rainbow Surfboards in 1970, according to the Encyclopedia of Surfing.

The board pictured above is a rare example of a Hynson shaped downrailer that was created for Bahne during Hynson’s brief tenure at the brand, which took place between 1969 and 1970. It is currently being offered for sale on Craigslist in Orange County, and you can find a link to the board here. The Bahne Hynson downrailer measures 6’8″ and it has been restored by Sam Cody, who works on glassing boards at Bing Surfboards today. You can clearly see the down rail design in the picture above. This may look pretty unremarkable by modern standards, but that’s the point: compared to Transition Era boards in the late 1960s, Hynson’s down rail designs represented huge performance gains

According to the seller, Bahne produced these downrailers in production quantities during 1969 and 1970, and the boards were shaped by Hynson himself. (Stoked-n-Board claims Hynson shaped for Bahne only during 1970; however, both Surfy Surfy and the board’s seller claim 1969 was the year Hynson started, so I’m going with 1969.) There is no signature on the board. Nonetheless, I believe the seller’s account, given that he is a current surfboard industry executive and a knowledgeable collector. The seller also took the board to both Bill Bahne and Mike Hynson, who confirmed that the board was shaped during 1969 / 1970 in the old Bahne factory, which was located on top of the hill on Westlake in Encinitas.

But wait! There’s even more back story. The seller believes the airbrush was done by Gary Brummett, an artist who also did some pinline and resin work with Surfboards Hawaii. The seller initially showed the board to Peter St. Pierre, founder of Moonlight Glassing and father of the owner of Leucadia shop Surfy Surfy. It was St. Pierre who identified the airbrush as being the work of Gary Brummett.

While the Bahne Hynson downrailer above doesn’t bear a Hynson signature, there are a few other Bahne boards that do. Bahne Mike Hynson surfboard, as originally seen on Surfy Surfy. Click through to their blog for more pics of the board, which is another example of a 1969 downrailer.

To no one’s surprise, Surfy Surfy has a great example of a different Bahne / Hynson board. See the photo above. It’s interesting to see the “Designed and Hand Shaped by Mike Hynson” laminate right beneath the Bahne logo.

Another example of a Bahne / Hynson collaboration. Even though Hynson definitely shaped for Bahne, I tend to think the “Designed and Hand Shaped by Mike Hynson” logo is a laminate. Pic via Vintage Surfboard Collectors (Facebook)

There’s another example of a Bahne Hynson shape on Facebook. You can find the link to the board here. The board is also dated to the late 1960s, according to the poster. I highly recommend clicking through, as the board has a beautiful acid splash paint job and it is in beautiful condition.

Hynson Surfboards and its creator have a long and illustrious history that is well-deserving of another, more in-depth post. In the meantime, however, enjoy the evidence of Hynson’s time at legendary Bahne Surfboards. Finally, you can find a link to the Bahne / Hynson downrailer being offered for sale here.