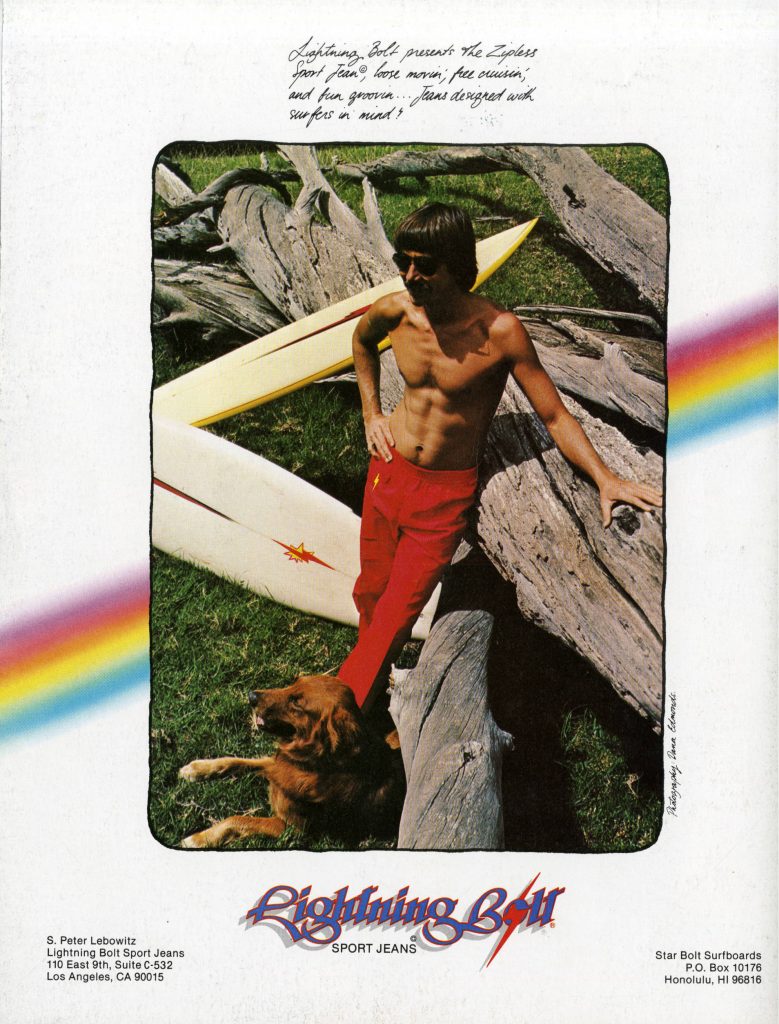 Thursday is a day of anticipation: with the weekend in striking distance, hope has a way of blossoming. And just in case Thursdays weren’t glorious enough already, here at Shred Sledz we have made considerable efforts to further ease your transition into weekends chock filled with waves, wax and warmth. Yes, that’s right: Thursday means it’s time for Sagas of Shred, your favorite peek into surfing’s past. Today’s entry features a Gerry Lopez Lightning Bolt ad from 1979. Lopez is famous for navigating gaping barrels at Pipe with aplomb, but he can also make pleated tracksuit bottoms look cool, which might be just as impressive.

You can see some of the cracks starting to form in the fine print of the Gerry Lopez Lightning Bolt ad. While the ad is advertising a product known as “Lightning Bolt Sport Jeans”, you’ll also notice in the lower left hand corner that there’s an address for a separate business under the same name, which is owned by a mysterious gentleman named S Peter Lebowitz. I wasn’t able to find any info about Lebowitz online. On the lower right hand side you can see that there’s a separate address for Star Bolt Surfboards. There isn’t much information about Star Bolt online, but Damion from Board Collector has an excellent overview of the mysterious brand. My guess is that at this point, Bolt had licensed out some of its apparel production to separate companies — a hint of the rapid over-expansion that would later cause headaches for the storied brand.

It’s a shame that Lightning Bolt came to such an ignominious end, but the Gerry Lopez Lightning Bolt ad above is a reminder that the brand’s heyday was — and is — timeless.

Tune in next week for another entry in Sagas of Shred!