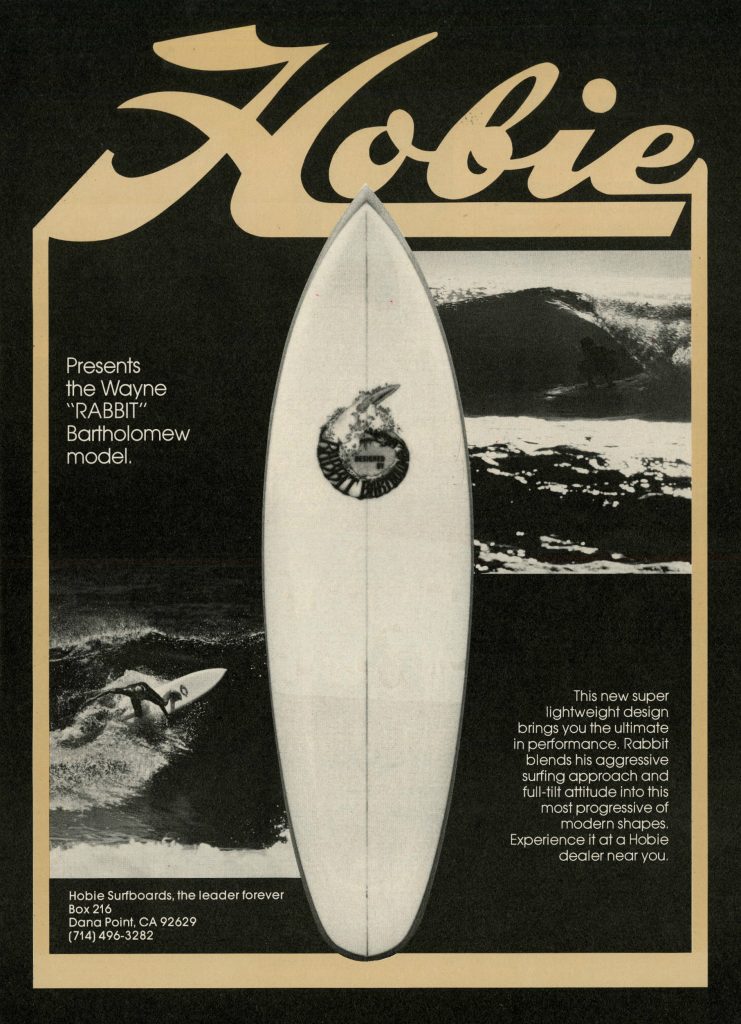 Greetings, Shredderz! It’s Thursday, which can mean only one thing: here at Shred Sledz we’re taking a trip in the Wayback Machine to take a peek at some long-lost surf artifacts from the past. A few weeks ago I featured a Hot Stuff Rabbit Bartholomew model with an incredible airbrush of Burleigh Heads on the bottom. Rabbit’s Hot Stuff model features an absolutely classic logo that probably wouldn’t fly in today’s intellectual property environment. Today’s post features an ad for a Hobie Rabbit Bartholomew Model that originally ran in Surfer Magazine in 1979.

This ad was the first — and only — time I have ever heard of the Hobie Rabbit Bartholomew Model. It’s particularly interesting given that Hobie is a California-based brand, and Rabbit remains one of Australia’s all-time surfing heroes. That said, Rabbit was still an incredibly popular surfer stateside, and I imagine that this collaboration was meant to capitalize on his recognition at the time.

I have been able to find some similar boards online, but none bearing any sort of association with Hobie Surfboards. The first comes courtesy of SoulSurf.com.au. If you’re into vintage Australian boards, I can’t recommend SoulSurf enough. They have a great selection of vintage sticks for sale, and they have kept up galleries of boards that are no longer in stock. SoulSurf has an example of a twin fin Rabbit Bartholomew model made for Aussie label Pipedream Surfboards, which you can see below.

You’ll notice the laminate on the left is nearly identical to the one that appears on the Hobie Rabbit Bartholomew Model in the ad at the top of the page. The only difference is the “Fashioned by Murray Bourton” laminate (Bourton founded Pipedream).

First, it’s hilarious to note that Rabbit is clearly surfing a Lightning Bolt board in the laminate on his signature model! To me that speaks to the ubiquity of the Bolt label during the 1970s, which had become more or less synonymous with the sport itself. I also love the so-called “Hookah” Pipedream logo (and note the “Kirra QLD” designation, letting you know the brand’s Gold Coast origins.)

Finally, it looks as if Rabbit barely changed the Pipedream logo before repurposing it for the Hobie Rabbit Bartholomew model. Here’s an example of a non-Rabbit Pipedream board, which was originally posted on Von Weirdos.

Standard Pipedream Surfboards logo from 1980. As you can see, the logo Rabbit uses on his Hobie signature model is virtually identical. Pic via Von Weirdos

As evidenced by the Lightning Bolt logo throughout, the 70s were a different time when it came to trademarks and the like. I see the recycling of the various logos is a sign of the freewheeling nature of the surf industry during the 1970s.

If you’ve ever seen one of these mysterious Hobie Rabbit Bartholomew models, give me a shout! Until then, tune in next week for another installment of Sagas of Shred, brought to you by the fine folks at Shred Sledz.