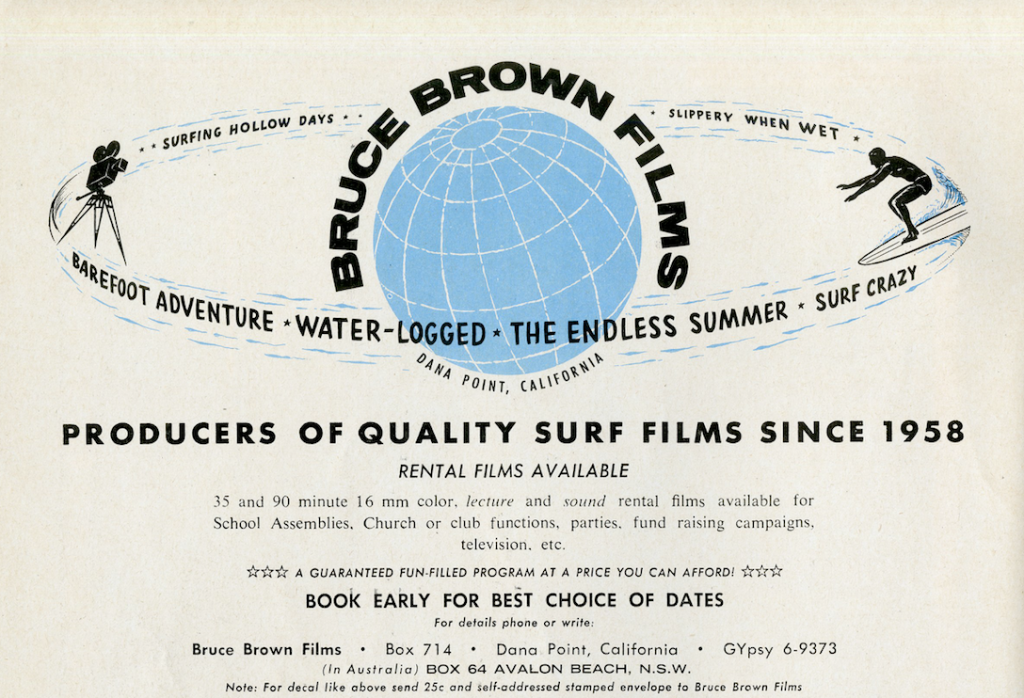 It’s Thursday, Shredderz, and that means we all get to hop in the Delorean and head back to surfing’s golden years as part of the Sagas of Shred series. Pictured above is a vintage Bruce Brown Films advertisement from 1963. The advertisement appeared in an issue of Surfer Magazine well over fifty years ago (Dec. – Jan. 1963 / 1964, Vol. 4 No. 6). Bruce Brown might be the most famous filmmaker in the history of the sport of surfing, thanks to “The Endless Summer.” It is no exaggeration to say that there are too many iconic images from “The Endless Summer” to list, but one of my favorite scenes features Robert August and Mike Hynson showing up to the airport dressed to the nines in suits seemingly pulled from Don Draper’s closet while casually toting giant surfboards. The only other scene that comes close is when Johnny Utah showed up to the FBI office brandishing an egg festooned with neon flames, but I digress. Robert August at the airport, back when this kind of stunt wouldn’t cost you your kidney in excess baggage fees. And how about that Jacobs-branded suitcase?! Pic via The OC Register

One of the interesting things about the Bruce Brown Films ad at the top of the page is that it pre-dates the release of “The Endless Summer” by about three years. Indeed, the film’s title is almost snuck into the rest of the copy on the advertisement, despite the fact that it is far more famous than the other projects that are mentioned. I also love the fact the advertisement spells out rental opportunities for things like church or club functions. It all seems a lot more, well, civilized than simply firing up YouTube and being forced to sit through an ad for cleaning products before watching the famous Cape St. Francis scene.

In an age where surf media is changing so quickly, there’s also a measure of comfort to be found in the Bruce Brown films ad. It is a reminder of a simpler world. This isn’t to say it’s better — YouTube is fantastic, thank you very much — but it’s different, and that’s always worth considering, isn’t it?

As always, thank you for reading, and check back next week for another installment of Sagas of Shred.