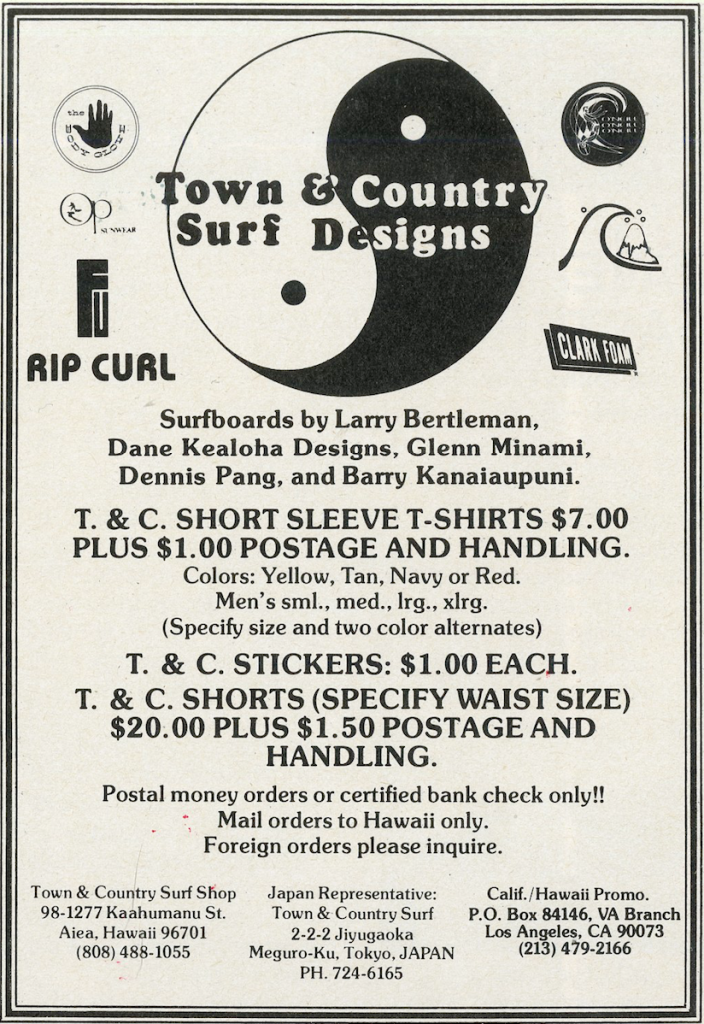 Greetings, Shredderz! Yes, it is Thursday. Yes, I have another excellent vintage surf ad to share with you all! This humble little T&C Surf Designs promo comes from an issue of Surfer Magazine originally published in 1979. As you can see from the presence of numerous other brands — Rip Curl, Body Glove, Clark Foam, Quiksilver and O’Neill, among others — the ad seems to come from a time when T&C was most widely known as a surf shop, rather than one of the brands that came to define the aesthetic of the 1980s. And while Craig Sugihara founded T&C Surf Designs in 1971 as a retail operation, for most T&C fans, the brand’s roots lie in its impressive stable of shapers and surfers. The names that appear on the ad are represent some of the biggest names in modern Hawaiian surfing history. T&C Surf Designs founder Craig Sugihara in front of his first shop. Pic comes from the excellent history of T&C that can be found on its website. I’m not sure when T&C dropped the ‘e’ in Towne, but this is an incredible old picture. A T&C Surf Designs 1970s or early 1980s twin fin that was sold on eBay a few months back. Pic via the eBay listing.

The other mention that took me by surprise was that of Barry Kanaiaupuni. Kanaiaupuni, of course, is one of the most famous surfer / shapers ever to grace the shores of Hawaii. BK is probably best known for his stint at Lightning Bolt, but he had a signature model for Rick Surfboards, and also shaped for Surf Line Hawaii.

I have written before about Seventies boards made by California shapers who are best known for their work in the Eighties — think of people like Lance Collins at Wave Tools, Shawn Stussy’s days at Russell Surfboards, and Peter Schroff. In those cases I have found that boards shaped before the Echo Beach craze could often be found at much cheaper prices than their Eighties counterparts. I don’t know if that theory necessarily applies to Hawaiian boards made in the 1970s. There aren’t very many T&C Surf Designs single fins that pop up for sale, and when they do, my sense is that they tend to get snapped up pretty quickly. If I get some better data on the subject, I’ll be sure to write a more in-depth post. (And if you have any sweet Seventies T&C Surf Designs boards, hit me up!).

I hope you enjoyed this look at some T&C Surf Designs goodness from the late 1970s. Make sure you tune in next week for more Sagas of Shred!