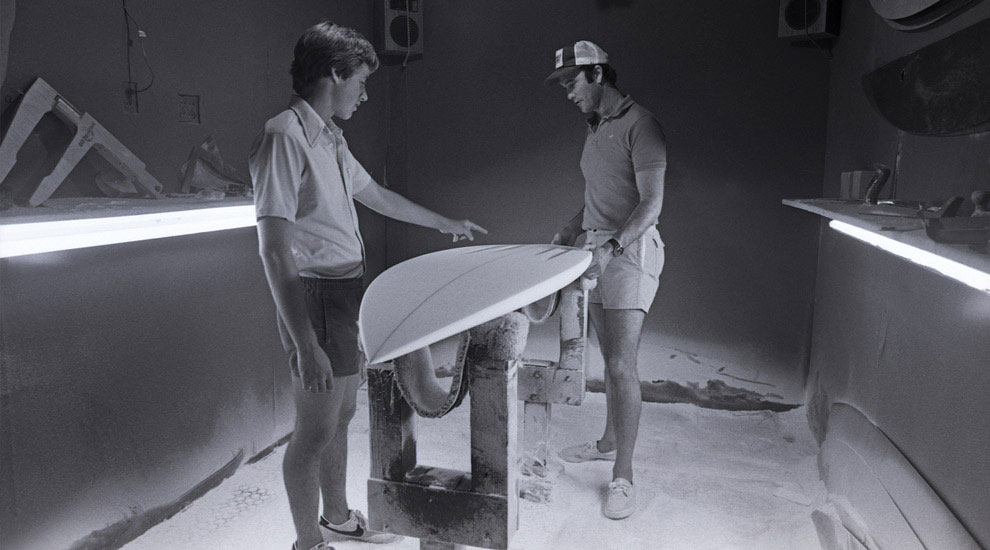 Season’s Greetingz! I hope each and every one of you is having a great holiday season. 2017 has been a wonderful year for Shred Sledz, and as we draw things to a close, we have a truly special board brought to you by one of our earliest readers. When it comes to high performance shortboard shapes, Al Merrick is a man without peer. Thanks to Merrick’s collaborations with not one, but two of the all-time greats, the Channel Islands steward is the closest thing to Phil Jackson that surfing has to offer, minus the Zen Master’s disastrous third act at Madison Square Garden (can you tell this blog is written by a Knicks fan?). Even if Al Merrick had only worked with Kelly Slater, the eleven world titles won on Channel Islands boards would have been enough to reserve a spot on the Mount Rushmore of surfboard shapers. But years before Kelly even qualified for the tour, Merrick was the Obi Wan to Tom Curren’s Luke Skywalker, providing the sage advice and cutting-edge shapes that helped propel the young Californian to three world titles and a legacy as one of the most influential surfers of all time. A young Tom Curren getting positively futuristic in 1980 at Rincon. You can see Curren is surfing an early Channel Islands Al Merrick shape; I just wish I could see the fin setup from the pictures. My guess is the board is a twin fin. Photo by the late great Craig Fineman, and originally posted in The Surfer’s Journal

Simon Anderson invented the thruster in 1980 and won the prestigious Pipe Masters the next year, putting to doubt any lingering questions about the validity of his new tri-fin design. And while Anderson invented the thruster, one can argue that Tom Curren is the surfer who best defined high performance surfing during the 1980s — aided, of course, by a quiver of Al Merrick-shaped Channel Islands sleds.

Channel Islands capitalized on Curren’s competitive prowess by releasing a number of Tom Curren signature models. The Red Beauty is a replica of the board that Curren surfed in the 1984 OP Pro held at Huntington Beach. The Red Beauty takes its name from its airbrushed rails, as seen below.

Tom Curren coiling into another graceful bottom turn. It’s all about the hand placement, baby! I’m not sure if this board is considered the original Red Beauty, but as you can see, it is an Al Merrick Channel Islands board with the classic Red Beauty rails.

Many consider Channel Islands Surfboards’ Black Beauty model the definitive Tom Curren Al Merrick shape. The Black Beauty model is still sold today. Black Beauty is the nickname for the board that Curren surfed on the way to his maiden world title in the 1985 / 1986 season, so named for black airbrushed rails. Most famously, Curren rode the board to victory in a semi-final heat against nemesis Mark Occhilupo in the 1986 Rip Curl Pro at Bells Beach, which is regarded as one of the finest heats in competitive surfing. Curren about to slingshot into a signature smooth cutback at the 1986 Rip Curl Bells Beach Pro. I believe the board pictured here is the original Black Beauty, although the airbrushed rails were a common feature in Curren’s quiver. Photo by Joli and pic is via his excellent website.

The real reason behind this post is the emergence of a truly special board: an honest-to-goodness Tom Curren Al Merrick hand shape. First, a quick bit of background on pro boards. Pro surfers go through surfboards faster than Kobayashi mows down a pack of Nathan’s Famous Hot Dogs. Sponsored surfers receive dozens of boards a year, then ruthlessly whittle down their quivers to a handful of magic sticks that will be counted on to perform during high pressure contest situations. Surfboards made for pro surfers boast high performance but super light glass jobs, and as a result, most boards that achieve keeper status are surfed until disintegration. Generally speaking, whenever pro boards pop up for sale, looking brand new and sporting recognizable arrays of laminates, it’s because they weren’t part of the regular rotation. This isn’t to pooh pooh any of these boards — they are still awesome! — but the point is that it’s rare to find boards that belonged to pro surfers that also were surfed on a regular basis.

The board you see pictured above, however, is the real deal: a board shaped by Al Merrick and surfed by Tom Curren. This board is currently owned by Matt Johnson, an early Shred Sledz reader (thanks Matt!), who originally posted the board to the Vintage Surfboard Collectors group on Facebook. You’ll notice the laminates reflect Curren’s sponsors at the time — Ocean Pacific, Rip Curl wetsuits (ah, the innocent days when pros had separate clothing and wetsuit sponsors!), Channel Islands / Al Merrick, and The Surf. The spray job along the rails is a Tom Curren staple, including on his Red and Black Beauty surfboards. The Tom Curren Al Merrick personal rider above has a bump squash tail, which you can see in the third picture, and a glass job from Santa Barbara glasser extraordinaire Bob Haakenson. Close up of Al Merrick’s signature on the stringer. No reference to Tom, however. Pic via Matt Johnson

You’ll also notice that the stringer bears Al’s distinctive “fish” signature, along with measurements. The board is pretty narrow, measuring 18.75″ at its widest point, and the rails clock in at 2.75″.

Oftentimes, dating a board can be inexact, at best. Luckily, there is a whole bunch of photographic evidence with the Tom Curren Al Merrick board pictured above. The board was surfed in the summer of 1988, and likely made around the same timeframe. Unlike many pro boards, Curren actually did work with this bad boy! In fact, Tom Curren surfed the Al Merrick shape to victory in the 1988 Marui Japan Open, held at Habushiura Beach on Niijima Island, over Gary Elkerton. For the next stop on the 1988 / 1999 ASP Tour, the Gotcha Pro at Sandy Beach on the South Shore of Oahu, Curren took a second-place finish, losing to Derek Ho in the finals. See below for some pictures from a 1988 issue of Surfer Magazine:

You can clearly see the board is the same Tom Curren Al Merrick shape featured here, from the fade to black airbrush on the rails to the placement of the logos. The pictures on the left are from the 1988 Gotcha Pro — note the sleeveless pink singlet on Curren in both pictures. (And need we even point out that Derek Ho’s two-tone stonewash boardshorts are incredible?) The picture on the right is Curren surfing during the 1988 Marui Japan Open.

So why did Curren ditch a board that propelled him to first and second place finishes to begin the 1988 / 1989 ASP season? Your guess is as good as mine. But given Curren’s reputation for mysteriousness and gentle unpredictability, it’s only fitting that he would turn his back on a magic contest-winning board. Either way, it’s a thrill to document such a special surfboard that represents the Curren / Merrick pairing, one of the few duos that truly can lay claim to having changed the sport of surfing.

As always, I cannot thank you, my readerz, enough for your support. Looking forward to sharing some more stoke in the New Year.