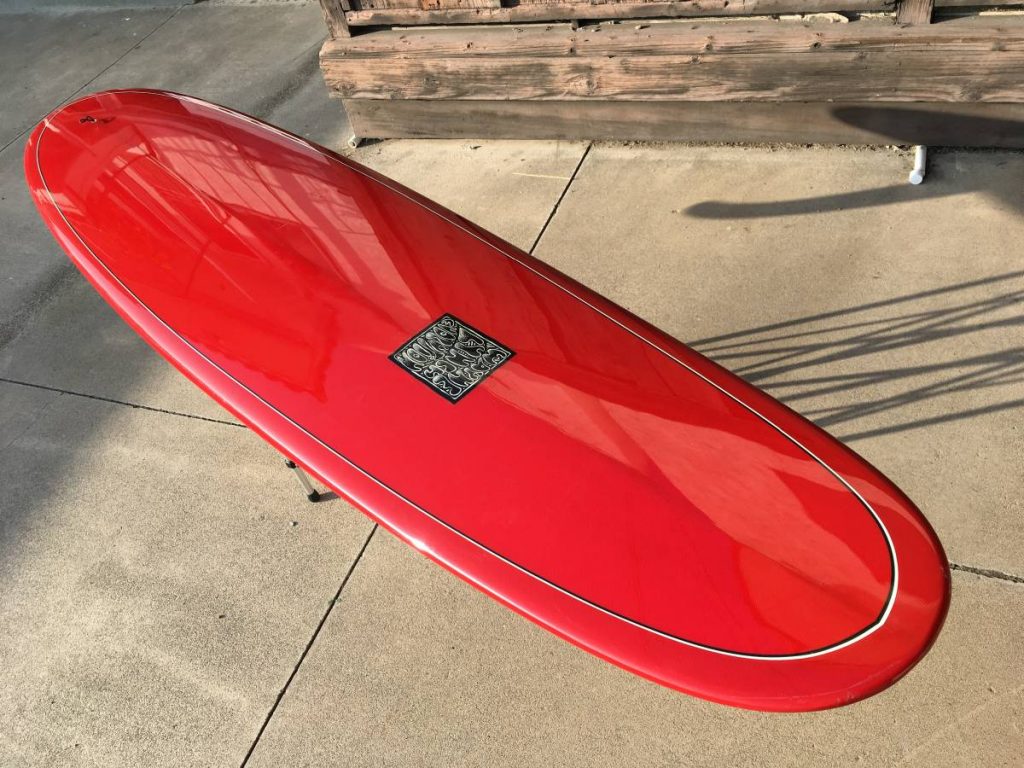 Greetings, Shredderz! Now, before I say anything else, I want you to know one thing: I love all of my children equally. It would be wrong not to. And yet…if you were to find me in a particularly susceptible state, then ply me with a cold brewski or two, until finally, in a moment of weakness, you asked me what my favorite Shred Sledz blog post was…well, I’d be forced to tell the truth. I published this early history of Wayne Lynch’s shapes on my birthday earlier this year, and the post continues to gain a decent amount of traffic (by Shred Sledz’s paltry standards, anyway). Shred Sledz has a distinctly American point of view, but I love Aussie surf culture and shapers, and in the process of researching my Wayne Lynch post, I became a huge fan of the man and his boards. Thus, you can imagine my delight when I came across a Wayne Lynch Evolution reproduction board.

The seller provided an unusual amount of detail with the Craigslist posting that gives some good context on the history of the board. First, the seller included a link to a Surfer’s Path article that describes how these Wayne Lynch Evolution reproduction boards came to be. Close up of the signature on the Wayne Lynch Evolution repro board. You can see a very faint “5 of 10” beneath Lynch’s signature. Pic via Craigslist

The numbering on the board is a bit confusing. As you can see in the photograph above, there is a very faint “5 of 10” beneath Lynch’s signature (note the numbering is upside down). The way the Surfer’s Path article tells it, in 2008, Lynch and Australian vintage surfboard guru Rob Dunn collaborated on 40 Wayne Lynch Evolution reproduction boards in honor of the “Evolution” film’s 40th anniversary. It’s not exactly clear why, but apparently the first 30 reproduction boards were released around 2008, and then another ten were released about two years later.

At first, I assumed the “5 of 10” numbering on the red board above was due to the fact that Lynch and Dunn released the first thirty Evolution repro boards, and then later released the final ten about two years later. Or, expressed in mathematical terms, 40 minus 30 equals 10, meaning that the red board was one of the last ten of the 40th anniversary Wayne Lynch Evolution boards. And in that case, I assumed the last batch of ten boards would have been numbered from one to ten.

There’s another interesting tidbit from none other than Surfy Surfy. Surfy Surfy wrote a blog post advertising an identical Wayne Lynch Evolution reproduction board, down to the “x of 10” numbering scheme. I have included pictures below:

Finally, I posted another Wayne Lynch Evolution repro board on Instagram a while back. This board was sold on Craigslist a few months ago. I have embedded the post below:

?Craigslist alert ?: this beautiful Wayne Lynch Evolution 1968 replica is currently on sale on Craigslist in San Diego for $550. I believe this was one of the reproductions made a few years ago for the release of the "Uncharted Waters" Lynch biopic. @surfysurfy has a few pics of the replica boards on their blog (though not this one, as far as I can tell). Board looks like it's in great condition and the price is cheap, if you ask me! #waynelynch #waynelynchsurfboards #craigslistwheelinganddealing #shredsledz

First, can you believe someone sold that bad boy for $550?! My goodness. Anyway, one thing that stands out about the Instagram board is the fact that there are two black and white Evolution laminates on the bottom of the board. Note that both the red board at the top of the page and Surfy Surfy’s purple / yellow Evolution repro board only have one logo on the bottom. This is important because the 40th Anniversary boards are supposedly exact copies of the design Lynch rode on the “Evolution” poster, which clearly features two logos on the bottom. In addition, the board on my Instagram has a glass-on fin, while at least the red Wayne Lynch Evolution board has a fin box.

In summary, I’m wondering if there were two runs of Wayne Lynch Evolution 1968 replicas: one run shaped in the late 1990s, featuring single black and white Evolution logos on the bottoms, and numbered from one to ten; and then the 40th Anniversary run, which have double logos on the bottom, and are numbered from one to forty. I can’t prove anything without detailed pics to compare between the two. If you have any info, please feel free to chime in and let me know!