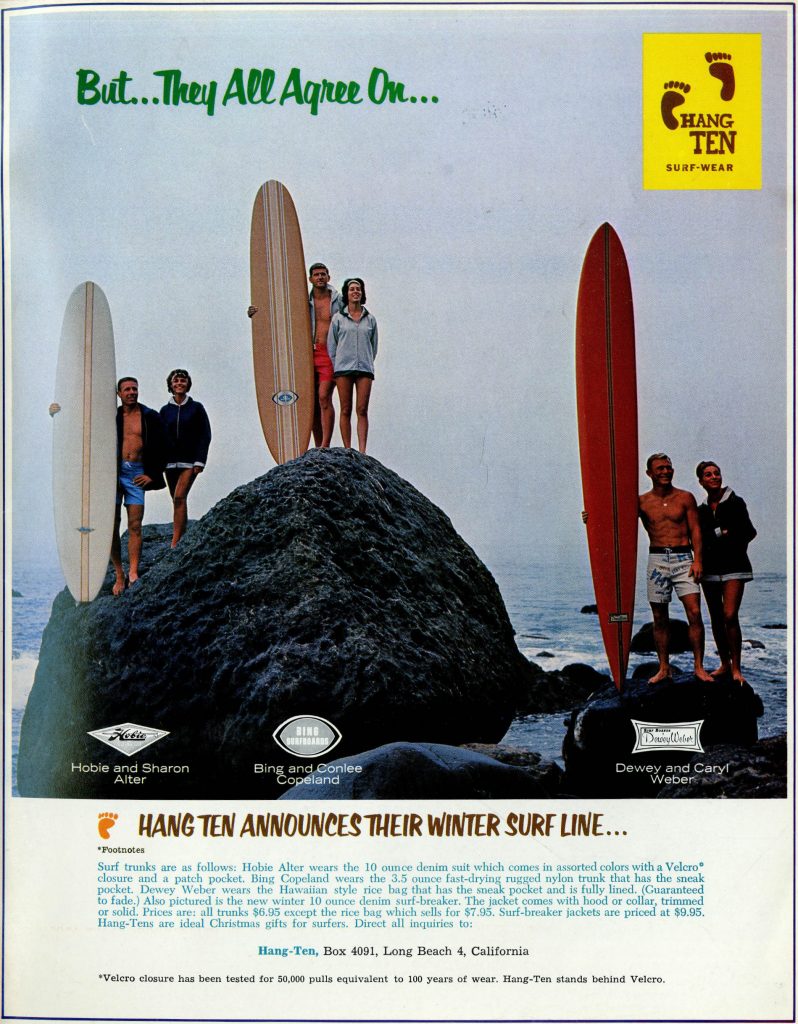 That’s right, folks: it’s Thursday, and Sagas of Shred keeps rolling along. Today we have another ad from an issue of Surfer Magazine from the 1960s, featuring classic surfwear brand Hang Ten. To be honest, it was only recently that I realized that Hang Ten’s history went back so far. Sadly, Hang Ten was purchased by some faceless conglomerate a few years ago, and today it churns out uninspired interpretations of California cliches. But I digress. In contrast, the Hang Ten ad pictured above is completely bitchin’. It features three of the greatest shapers of the 1960s, all of whom have gone on to become boldfaced names in the world of surfing: Bing Copeland, Hobie Alter and Dewey Weber (and of course, all three shapers’ respective better halves).

I love that all the shapers are posing alongside some of their creations. Weber’s board, in particular, looks enticing. I’m guessing it’s some sort of big-wave gun, whereas Bing and Hobie both have longboards that look like pretty standard issue for the 1960s. Weber’s board looks like it has to be at least 10′ in length, and the pintail stands in stark contrast to the wide-hipped Hobie and Bing examples.

One common pattern in these vintage ads is the unusual amount of crossover. For example, you would never see a Hurley ad running today featuring Jon Pyzel, Matt Biolos and Hayden Cox (least of all because the latter two gentlemen also sell clothing themselves). I suppose this was a byproduct of the tight-knit surfing scene in the 1960s, when it had yet to become a global multi-billion dollar industry. I wouldn’t go as far as to say the Olden Days were better — after all, forty years from now, someone is going to be waxing nostalgic about the world before Kelly’s Wave Pool took over the world — but there’s an undeniable sense of optimism in many of these early surf advertisements.

As always, thank you for reading, and tune in next week for another installment of Sagas of Shred!