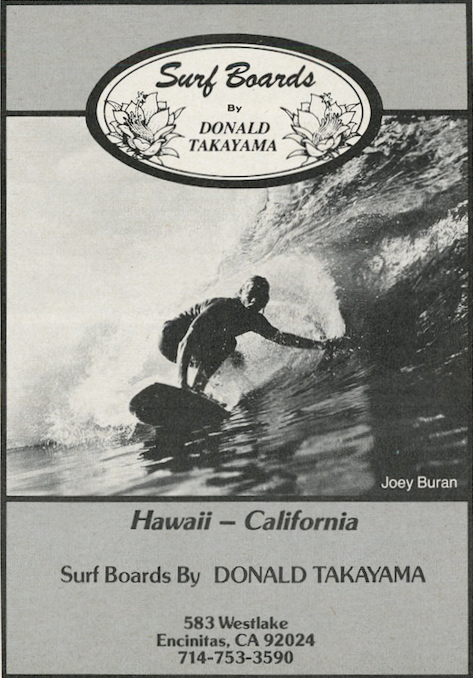 Greetings, Shredderz! It’s another Thursday, which means another small but satisfying dose of surf culture from years past. Pictured above is a vintage Donald Takayama ad that originally appeared in Surfer Magazine in 1979. What’s interesting to me is the fact the ad is for board Takayama shaped under his own name, as opposed to his Hawaiian Pro Designs label. I’ve never been able to figure out when exactly HPD was founded — Stoked-n-Board claims 1965, but I’ve read late 1970s elsewhere — or how exactly HPD came to be. Larry Bertlemann was also involved in Hawaiian Pro Designs at some point.

The Takayama ad above features a young Joey Buran, who would famously go on to become the first Californian to win the prestigious Pipe Masters contest. Buran won the Pipe Masters in 1984, meaning this ad came out a full five years before his Hawaiian victory.

Standard Store, a rad Japanese surf shop, claims the above board is an example of a Donald Takayama Joey Buran model. I’m not so convinced, but I’m not ready to make a judgment either way. I have personally never heard of a Joey Buran signature model, and to me, the Takayama above looks like any number of twin fins that Takayama shaped during the late 1970s / early 1980s. In any case, the board above does not have any Hawaiian Pro Designs branding.

I haven’t been able to find any other pictures of Joey Buran surfing Takayama boards. If you know of any, or if you’re sitting on a secret stash of vintage surf pictures, then please do get in touch!

Otherwise, check in next Thursday for another installment of Sagas of Shred.