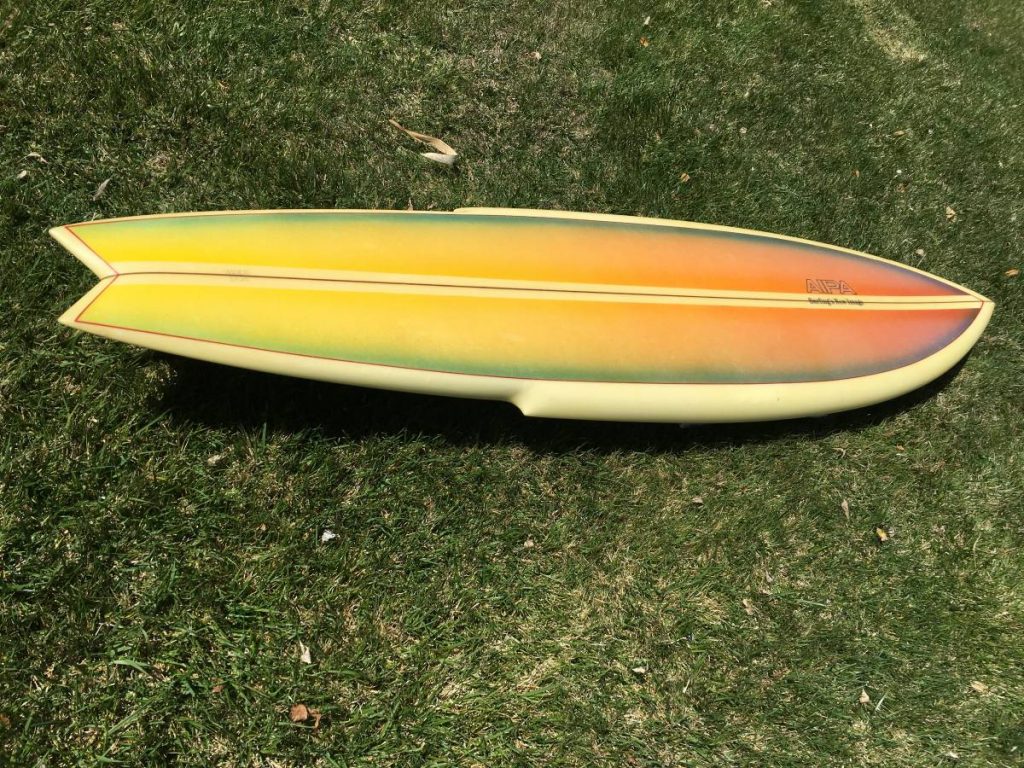 Greetings, Shredderz! By now regular readers might know that I have a real affection for the sting, a surfboard outline created by Ben Aipa in the 1970s, and ridden to acclaim by Hawaiian surfers like Buttons Kaluhiokalani and Larry Bertlemann (and Mark Richards, too!) The board is frequently referred to as the stinger, but Aipa insists the proper name is the sting, and I am in no position whatsoever to argue with that! I wrote a previous post about how to identify genuine Ben Aipa shaped stings, given that many “Aipa” boards were produced by California-based Surfing’s New Image during the 1970s and 1980s. SNI boards are nothing to sneeze at though, as some of them were shaped by Donald Takayama. Rick Hamon, who would later become one of the top shapers at Rusty Surfboards, also churned out a number of Aipa / Surfing’s New Image stings.

Pictured above is a pretty flawless example of a Rick Hamon-shaped Aipa / SNI sting. These aren’t quite as collectible as real deal Aipas, but they are still amazing boards. The board pictured above happens to be listed for sale on Craigslist in San Diego, and you can find the listing here.

As you can see from the pictures, this thing is in extremely clean condition. The seller claims the board was shaped for him around 1975, which would put it around the height of the sting’s popularity. It has a beautiful rainbow airbrush on the deck, which you can clearly see in the pictures. The board measures in at 7’4″.

The seller is asking $600 for the board. While Aipa / SNI stings shaped by Hamon don’t command as high prices as Ben Aipa hand shapes, there seem to be a number of sting lovers. And even if the board isn’t shaped by Aipa, it still has his logo on it, which makes a difference. My two cents is this is a great price for the board considering the condition. Of course, standard caveats apply, as I haven’t seen the board in person for myself, but from what I can tell from the listing, this is a nice little pickup.

You can check out the Aipa Surfing’s New Image listing here.