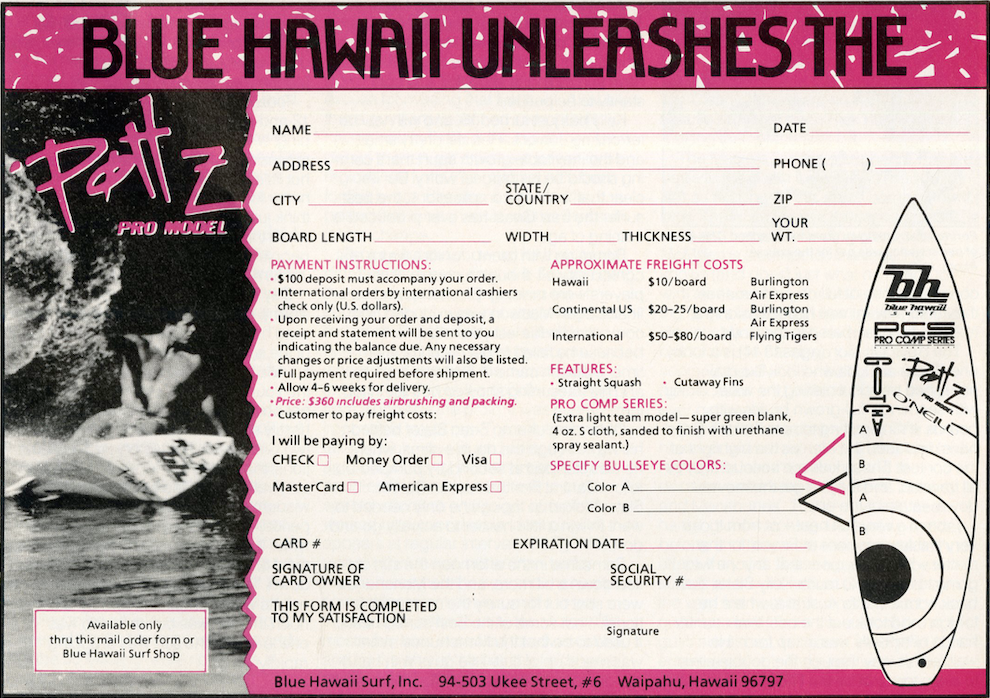 If you’re a regular reader of this blog, by now you probably know that the one-man Shred Sledz staff has a soft spot for the surfboards of the 80s. And in a decade filled to the brim with colorful characters and even more eye-catching boards, Martin Potter stands out. Pottz’s “Saint” Town & Country twin fin is his most famous board. In fact, its signature green and yellow spray job is still emulated today. The Blue Hawaii Pottz Model might not be as famous, but it’s a stick that has many fans, especially for examples bearing the signature blue flame airbrush around the rails.

The other thing that’s interesting about the ad is the customizable “bullseye” spray job that could be applied to boards. I have scoured the internet for examples of a Blue Hawaii Pottz Model with a bullseye design, but I was only able to find one. Even so, I think the example below is a custom spray job for an actual Martin Potter personal rider, versus a mass-produced version that is offered in the advertisement. I’m wondering if the board on the far right was actually the inspiration for the bullseye design in the ad.

Martin Monday! Got bored today so pulled out some of my boards! Two personal Martin potter boards one from his title year other from 87, plus couldn't help adding the T&c aipa twin with pottz spray!! If anyone know of a T&c personal pottz out there DM me please ??! @mrpottz @aipasurf @tcsurfshop @tcsurfboards #martinpotter #pottz #benaipa #townandcountrysurfboards @glenn_minami #vintagesurfboard #glennminami

I also can’t get enough of the shipping rates. Granted, the advertisement ran 30 years ago, but $25 to get a board shipped from Hawaii to the mainland? That is absolute madness. I’d almost take those rates over the board!

If you have any leads on some pictures of a Blue Hawaii Pottz Model with a bullseye airbrush on it, I’d love to learn more. Otherwise, thanks for reading and stop by next week for even more Sagas of Shred.

UPDATE: An earlier version of this post incorrectly stated that Glenn Minami had shaped Pottz’s “The Saint” twin fin for T&C. That board was in fact shaped by Glenn Pang.