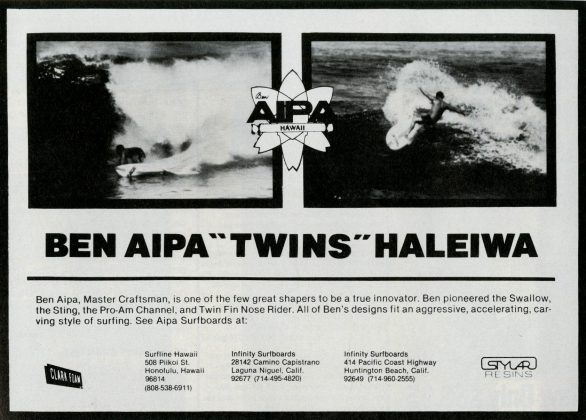 Greetings, Shredderz! Today’s Sagas of Shred entry is short but a worthy (I hope) follow on to most recent post, which featured an Aipa-branded but Rick Hamon-shaped sting. This ad comes from a 1981 issue of Surfer Magazine, after the 70s heyday of the Sting. Based on the copy I’m guessing it’s an ad for Aipa’s twin fin designs. The timing lines up, as the ad above ran at a time shortly before Simon Anderson’s thruster reached critical mass. The other interesting thing about the ad above is there is no mention whatsoever of Surfing’s New Image, which had licensed Aipa’s name for a run of California-made stings. Instead, the California distributor for Aipa’s shapes appears to be Infinity Surfboards.

I wish the photography in the ad were a little bit clearer, but oh well. It’s still pretty rad to me.

Thanks for reading and check in next week for more Sagas of Shred.

A Special PSA from Tom Curren