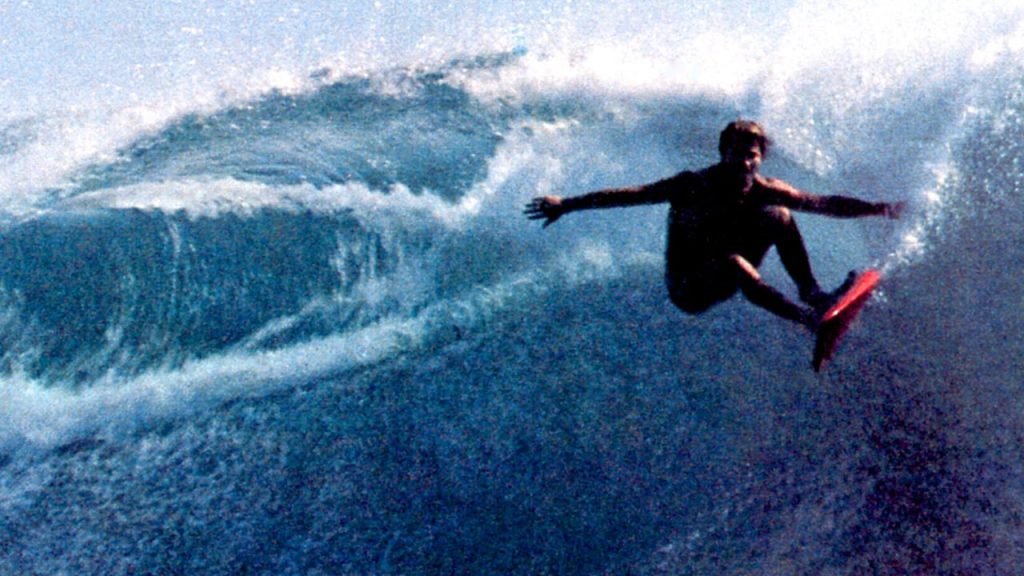 If, like me, you were a wide-eyed grom growing up in the surf hinterlands of New York during the late 1990s, there was only one Empire State native who had left his mark on surf history: the late, great Rick Rasmussen. Nowadays, New York’s pro surfing scene covers a wider spectrum, whether it’s Balaram Stack, who hangs out at the Volcom house on the North Shore and charges Pipeline, or Mikey Detemple, a filmmaker and soul surfer who embodies a quiet but distinct sense of cool. And as much as I love the new guys (let’s not forget Montauk’s Quincy Davis, either), Rasmussen will always be the ne plus ultra of New York surf icons. Sadly, Rasmussen’s legacy owes just as much to his shocking death, which took place during a drug deal gone wrong, as it does his eye-opening surfing. The essential chronicle of Rasmussen’s life and death can be found in The Surfer’s Journal, although the article is currently not available on TSJ’s online archives. You can find an excerpt on author Mariah Ernst’s personal website, however. Today’s post concerns one of the rare and prized relics from Rasmussen’s brief career: a genuine Rick Rasmussen surfboard. The board comes courtesy of Shred Sledz reader Bob Stassi. Thank you Bob for sharing!

As you can see, the board has a clear Dick Brewer Surfboards laminate. Brewer, of course, is probably the most famous Hawaiian shaper of all time, and part of Rasmussen’s legacy was the fact he surfed serious waves, whether it was on Hawaii or as an early visitor to Bali.

Still, I was a little surprised to see the Dick Brewer laminate on this board. Over the years Brewer has had some famous collaborators and proteges, such as Owl Chapman, Sam Hawk, and even Terry Fitzgerald. However, this is the only example of a Rick Rasmussen surfboard I have ever seen produced under the Dick Brewer label. The board pictured above is clearly signed on the stringer by Rasmussen himself. I have no idea who John Bland is, and neither does the board’s owner. If anyone has any information, I would love to hear more about it!

Rasmussen also shaped under his own name, and those boards are quite rare as well. I recently stumbled across an example of a Rick Rasmussen surfboard at Bird’s Surf Shed in San Diego, and was able to snap a picture of the logo.

I found a Rick Rasmussen surfboard tucked away in the racks at Bird’s Surf Shed in San Diego, and was able to snap a picture on my phone. Bird’s is a must visit for anyone with so much as a passing interest in surfboards!

After a little digging, I was able to find some more pictures of various Rick Rasmussen boards online, but no other examples of one with a Dick Brewer logo. The “fruit basket” logo pictured above seems to have been a fairly common design on some of Rick’s boards. I was able to find a screen grab from an old East Coast surf movie called “Sun Waves & Flowing Free” that featured Rasmussen, via an old blog named Shipworm & Gribble. I can’t quite be sure, but it seems like some of the boards pictured on the Shipworm & Gribble blog bear the same “fruit basket” logo found immediately above.

The exceedingly rad dudes at Indoek — check out their “Surf Shacks” book if you haven’t already — posted a feature with Long Island collector Tony Caramanico, and in the background, you can see a picture of another Rick Rasmussen surfboard with the fruit basket laminate. Check out the red board second from the right. The logo is clearly identical to the one I took at Bird’s Surf Shack. Pic via Indoek; photo by Julien Roubinet

Roubinet has a book of his own, the newly released “Ice-Cream Headaches“, and a wonderful site that makes Shred Sledz look very humble indeed by comparison. Roubinet published a couple of photos of an absolutely pristine Rick Rasmussen surfboard on the Ice-Cream Headaches site. This board also belongs to Caramanico, and it was apparently one of the last boards Rasmussen shaped before his passing.

One of the last boards Rasmussen ever shaped. As you can see, Rasmussen employed a bird logo on this one. I just can’t get enough of this awesome 70s single fin outline! Pic via Ice-Cream Headaches / Julien Roubinet

It should surprise exactly no one that Buggs, the infamous surfboard collector, has a cherry example of a Rick Rasmussen surfboard on his site. This one bears an incredible laminate that reads “Rick Rasmussen Handcrafted Cruisers.” If anyone knows of a better tagline for a surfboard, then I’d like to hear it!

Logo from a Rick Rasmussen surfboard that belongs to Buggs, who runs Surfboardline.com.

Thanks again to Bob for sharing his pictures of his amazing Dick Brewer / Rick Rasmussen surfboard. I am dying to know more about Rasmussen’s time in Hawaii, and what kind of shaping lessons he might have picked up from Brewer himself.