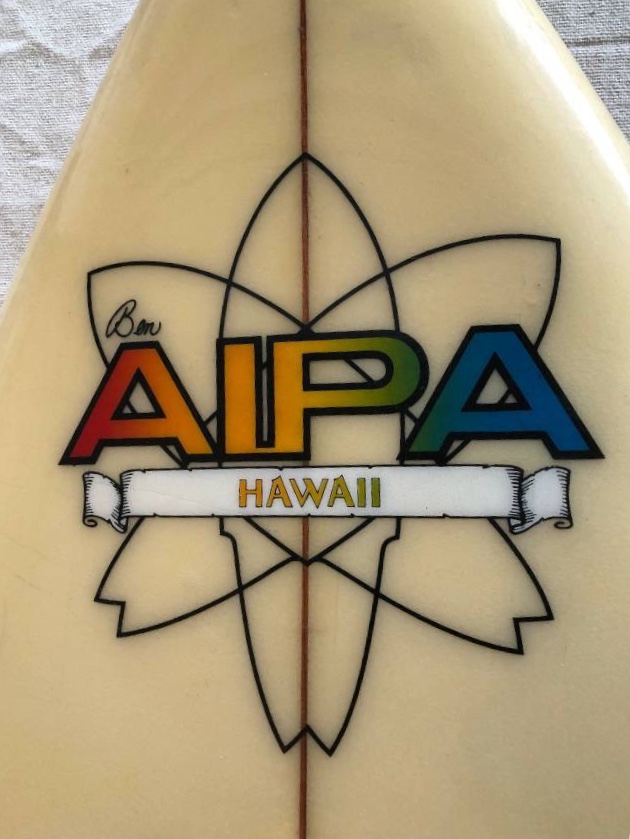 Greetings, Shredderz! Recycling is great for the environment, which is one of the many reasons I decided to take a closer look at a board I posted about on Instagram a few days ago. The Ben Aipa twin fin you see pictured here is no longer up on Craigslist, and last I heard, the bidding was around $950. It’s quite an increase considering the original asking price was a cool $200, but after what I’m guessing was a parade of very interested buyers, the seller put two and two together.

I can’t say I’m totally shocked, given the awesome colors and laminates on the board. There are a few dings here and there, but otherwise it’s in great condition. It looks like these are Star System fins but I’m not 100% certain. If I had to guess I would say the Aipa twin fin was shaped during either the late 1970s or early 1980s.

What did throw me for a bit of a loop was the fact the Aipa twin fin was shaped by Terry Senate and not Ben Aipa. I have never seen a Senate-shaped board with Aipa logos, but after doing a little digging online, I was able to find this one on The Surfboard Project. Close up of the signature on the Aipa twin fin. As you can see, it is clearly signed by Terry Senate.

Terry Senate is a San Clemente-based shaper who makes boards under his own label. Previously, Senate also did a ton of work for Infinity Surfboards. Anecdotally, it seems like a decent number of these Infinity / Senate boards pop up here and there on Craigslist in Southern California. I also absolutely love this Infinity / Senate 80s thruster, which I posted about on Instagram a few weeks back.

The San Clemente Times ran a brief profile on Senate that mentions how he studied under both Steve Boehne (who ran Infinity) and Ben Aipa. The article suggests that Boehne and Aipa tutored Senate simultaneously. Given Boehne’s Infinity Surf Shop was based out of Huntington Beach, this leads me to believe Aipa must have been shaping out of Orange County for some period of time. I suppose it’s possible that Senate could have shaped some boards during some trips to Hawaii, but I’m not certain.

Either way, the Aipa twin fin featured here is an awesome board (and the script Aipa laminates on the rails are an awesome and underutilized touch!) The ~$950 price tag, if reports are accurate, speaks to the collectibility of Aipa boards, even in cases when the boards were quite clearly shaped by other shapers.