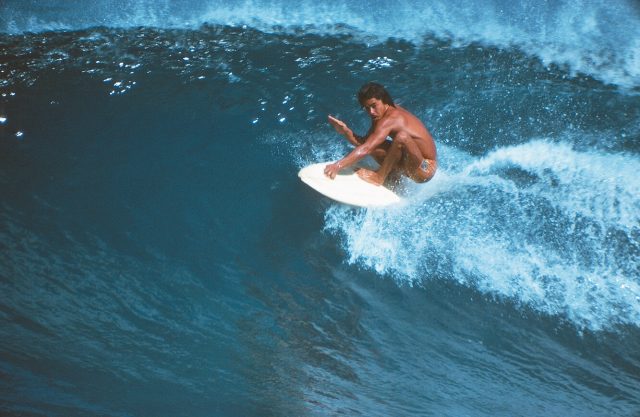 First, let’s get a few things out of the way. Reno Abellira is one of the greatest surfer / shapers of all time, and from all accounts, the Hawaiian is an all-around classic dude to boot. As evidenced in the photo above, which was taken from this excellent Surfing World writeup, Reno has style to burn, and then some.

Now, as for the ad above? I hesitate to say I find this ad hilarious, because in some way that suggests that I’m having fun at someone else’s expense. But I can’t help it: this ad cracks me up, whether it’s Reno’s glorious mustache or the fact the woman looks like she dropped her wallet somewhere right outside the frame. The Reno Abellira ad was originally published in Surfer Magazine in 1979, as if the visual aesthetic wasn’t a dead giveaway.

I believe the ad is for a Reno Hawaii clothing line. Reno definitely shaped boards that bore the Reno Hawaii logo as well, and you’ll still some pop up for sale from time to time. I don’t know a ton about Reno’s boards, but given his influence on surf history, I’m sure there will be more on his creations here at some point in the future.

Thanks for visiting and give us another visit next week for more Sagas of Shred!