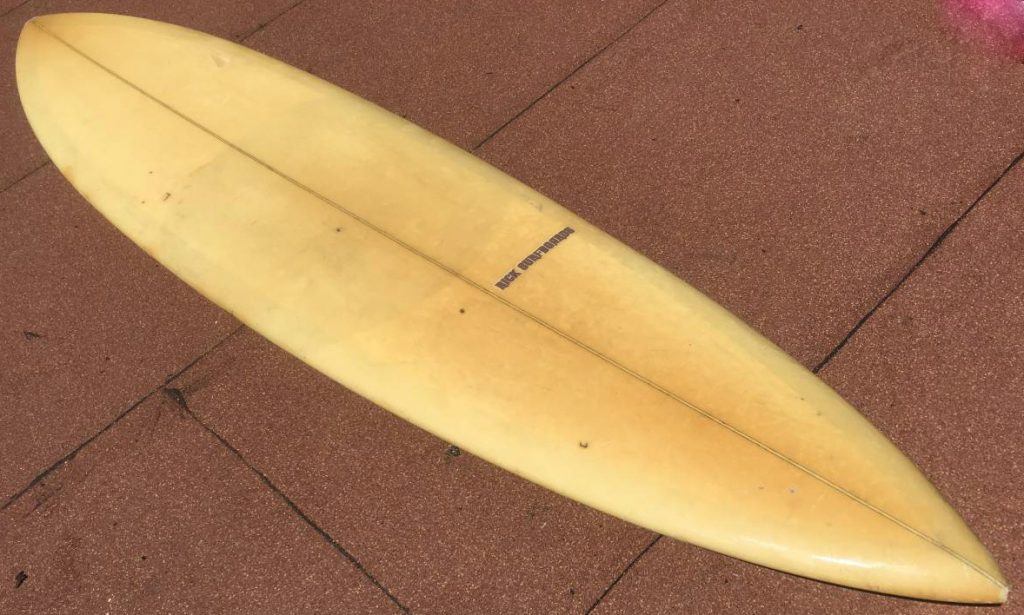 Greetings, Shredderz! For today’s post we have a neat Transition Era board from one of my favorite surfboard brands ever: Rick Surfboards. Rick Surfboards was the eponymous label from Rick Stoner, Bing Copeland’s former business partner and South Bay, Los Angeles lifeguard. For more background on Rick Surfboards, check out this Deep Dive on the brand’s 1960s longboards, as well as this complementary piece on the Barry Kanaiaupuni Pintail model. The BK model is particularly interesting because it bears a striking similarity to the Rick single fin featured here. Keep reading for a more detailed breakdown on the board.

First, the Rick single fin featured here is currently being listed for sale on Craigslist in San Diego. All pics in the post are via the Craigslist listing, which can be found here. First, shout out to the seller, who was kind enough to supply a number of very detailed pics of the board. Second, the Rick single fin measures in at 8’2″ and a generous 22.5″ width, and the seller claims the board was shaped during 1968. This date is certainly supported by the dimensions of the board, as well as the unmistakable W.A.V.E. Set fin box.

That all being said, I am struck by the similarities between the Rick single fin featured here and the Rick Barry Kanaiaupuni Pintail. The BK Pintail model was also shaped during the late 1960s, and as you can see in the picture below, it boasts a similar outline. Both boards have relatively wide noses and mid-sections that taper into aggressive pintails. I have seen versions of the BK Pintail that had glassed on fins, instead of W.A.V.E. Set boxes, but as you can see below, the Pintail was clearly made with both options. Example of a Rick Surfboards BK Pintail. Pic via Buggs and his insane collection, which you can see more of on Surfboardline.com

Most of the Rick single fin boards I have seen are classic 70s single fins. Transition Era Rick single fin boards are a bit harder to come by (with the exception of the BK Pintail). Check out Buggs’ collection on Surfboardline.com for more examples of other late 1960s Rick boards, and you’ll notice that they have very different outlines from the single fin featured here.

My guess is the Rick single fin featured in this post is a BK Pintail model that is missing its laminates. I have no way of proving it, of course, but the outline is distinctive. Even the logo is the same (minus any mention of Barry Kanaiaupuni).

This is the same exact logo you’ll see on Rick BK Pintails — and other Rick Surfboards from that era — but there’s no mention of Kanaiaupuni anywhere.

This is not to say that the Rick single fin featured here is a rare variant. If anything, I think it’s probably reflective of the informal ways surfboards were made back then. It could even be as simple as they ran out of laminates at the factory the day this board was made, or something along those lines.

The seller is asking $300 for the board. It’s in need of some more work — again, shout out to the seller for providing such detailed pics — but in my mind, this is a fair price for a unusual Transition Era board from one of my favorite surfboard logos ever. If you’re interested, you can check out the listing here.