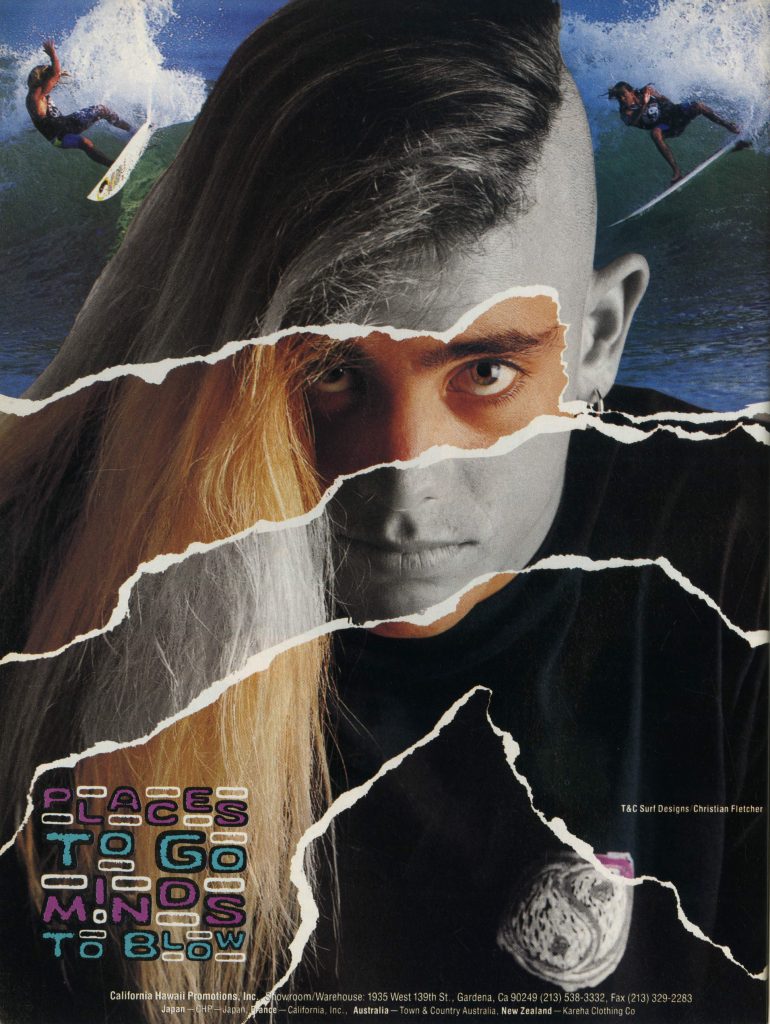 Greetings, Shredderz! For those of you who don’t know, Sagas of Shred is a series on the blog where we run vintage surf ads. While old magazine articles are great — The Surfer’s Journal digital archive, available to subscribers, is amazing — an overlooked angle is the fact that surfing’s story often gets told in the form of ads.

The T&C Surf Designs Christian Fletcher ad featured here ran in a 1990 issue of Surfer Magazine. To me, it’s a pretty classic expression of surf culture at the time, between the tail end of the Eighties and the Momentum Generation, which would arrive a few short years later. If I’m being honest, I often struggle to describe these ads. There’s no denying the unintentional humor. But the last thing Sagas of Shred aspires to be is the douchebag hipster that hides its unpleasant contempt behind a thin veneer of so-called irony. I can genuinely say I love this ad, and not just because it features one of the most influential surfers of the late Eighties and early Nineties. I love everything about it, whether it’s the odd torn paper effects, Fletcher’s vintage T&C shirt, or the unsettling feeling that Christian Fletcher might be trying to challenge you to a staring contest.

While many elements of the ad are charmingly dated to the late Eighties and early Nineties, the same cannot be said of Fletcher’s surfing. His front hand layback gouge is every bit as radical as it was when the advertisement first ran.

In the '80s, a lot of surfers didn't know what to think of Christian Fletcher when he took things up in the air. Oh, how times have changed… #fletcherdna #astrodeck #wavewarriors #christianfletcher #godfatherofairs #aerial #skateonwater #surfer #surfing #80s #tbt #lanty #mcelroy #t&c #trestles #whattookyouguyssolong

I’ve written a lot of Sagas of Shred posts about Fletcher and his family over time. We have featured T&C Surf Designs in Sagas of Shred a number of times as well, whether it’s a 1982 ad featuring Dane Kealoha in some short shorts, or another entry featuring the evolution of Ben Aipa’s famous Sting design. I think we can all agree that the Christian Fletcher / T&C Surf Designs marriage is one for the ages.

Thanks again for checking out Sagas of Shred and tune in late next Thursday night for more vintage surf ads!